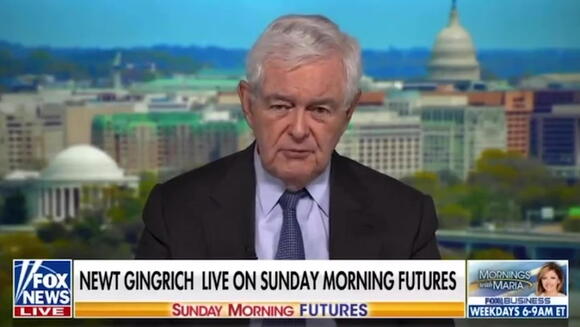 Former Republican House Speaker Newt Gingrich has predicted that members of the House Select Committee investigating the Capitol riot on 6 January last year could be jailed if the GOP takes control of Congress after the midterms.

“All these people who have been so tough and so mean and so nasty are going to be delivered subpoenas for every document, every conversation, every tweet, every email because I think it’s clear that these are people who have just been running over the law pursuing innocent people, causing them to spend thousands and thousands of dollars in legal fees for no justification,” he added.

Mr Gingrich said the committee was “basically a lynch mob and unfortunately, the attorney general of the United States has joined that lynch mob and is totally misusing the FBI, and I think when you have a Republican Congress, this is all going to come crashing down”.

More than 750 people have been charged in relation to the Capitol riot so far. At least 165 have pleaded guilty to various crimes. The Justice Department has estimated that between 2,000 and 2,500 people entered the Capitol on that day.

Contrary to Mr Gingrich’s remarks, several judges have complained that federal authorities have been too lenient towards 6 January defendants, NPR reported.

“The Justice Department remains committed to holding all Jan. 6 perpetrators, at any level, accountable under law — whether they were present that day or were otherwise criminally responsible for the assault on our democracy,” Attorney General Merrick Garland said earlier this month. “We will follow the facts wherever they lead.”

Responding to the judges’ criticism, he said: “A necessary consequence of the prosecutorial approach of charging less serious offences first is that courts impose shorter sentences before they impose longer ones.”

As of the beginning of this month, around 70 defendants had been sentenced, with about 30 getting prison time.

Mr Gingrich added that “the wolves are going find out that they’re now sheep and they’re the ones who I think are going to face a real risk of jail for the kind of laws that they are breaking”.

Princeton University history professor Julian Zelizer wrote in his book Burning Down the House that Mr Gingrich “liked to present himself as a big-idea man” but that “the truth is that his contributions as a partisan tactician were far more important than anything he did in terms of policy”.

Mr Zelizer argues that US politics started to become more polarized in the period from January 1987 to March 1989 as Mr Gingrich rose to power.

“Gingrich made his biggest impact on the GOP by defining what partisanship should look like and by expanding the boundaries of what was permissible in the arena of congressional warfare,” he added and noted that Democratic Speaker Jim Wright, who was ousted in 1989, told C-SPAN that DC was becoming a “less civil government, it’s becoming more polarized and it’s becoming more vicious”.

“Gingrich was not responsible for growing partisan polarization on ... Capitol Hill, but he legitimated ruthless and destructive practices that had once been relegated to the margins,” Mr Zelizer wrote.

Maryland Representative Jamie Raskin told MSNBC earlier this month that the 6 January committee is planning on holding public hearings throughout the year.

“We’ll tell the story of each dimension of this attack on American democracy. The American people have not yet seen all of the evidence laid out in this way. So we’re going to have hearings for the American people, which I hope will seem somewhat like the Watergate hearings did, in that they will be a daily occurrence so people can follow the unfolding narrative,” he said.

“[W]e’ll give America a report and Congress a report about what happened and what we need to do to strengthen our resiliency against future authoritarian attacks like this,” he added.

Louisiana Senator John Kennedy was left frustrated on Tuesday by Attorney General Merrick Garland’s unwillingness to offer an opinion on what percentage of police officers he believes are “bad” or racist.Mr Garland, who was testifying before the Senate Appropriations Committee regarding the Justice Department’s budget request for Fiscal Year 2023, appeared flummoxed by the Pelican State Republican’s inquiries, which called for him to render a judgement on the conduct of local police officers across the US.After Mr Kennedy asked him about “what percentage of cops in America” were what he described as “bad cops,” Mr Garland replied that the...
CONGRESS & COURTS・22 DAYS AGO
The Independent

A $40 billion infusion of military and economic aid for Ukraine and its allies was on the cusp of Senate passage Thursday as both parties rallied behind America's latest, and quite possibly not last, financial salvo against Russia's invasion.Thursday's planned vote would give final congressional approval to the package, three weeks after President Joe Biden requested a smaller $33 billion version. The House approved it last week after beefing up its defense and humanitarian expenditures, and Senate passage was not in doubt, though a modest group of America First-minded Republicans was expected to vote “no.”Biden's quick signature was certain...
FOREIGN POLICY・3 HOURS AGO
The Independent

Nearly two-thirds of Americans are giving President Joe Biden negative marks on his handling of the US economy, while seven in ten now want Supreme Court justices to serve term limits, according a newly-released Quinnipiac University poll.The survey of 1,586 adults conducted from 12 May to 16 May found 57 percent of respondents disapprove of Mr Biden’s job performance, with the share of respondents disapproving of his work on the economy was 63 per cent, with only 32 per cent approving.Mr Biden still commands a bare majority of support on his handling of the Covid-19 pandemic — a share of...
PRESIDENTIAL ELECTION・1 HOUR AGO
The Independent

Patricia Arquette has angrily confronted Elon Musk after he revealed his plans to vote Republican.Writing on Twitter earlier today (18 May), Musk explained that he has switched allegiance from Democrat as they have become a party of “division and hate”.He wrote: “In the past I voted Democrat, because they were (mostly) the kindness party. But they have become the party of division & hate, so I can no longer support them and will vote Republican. Now, watch their dirty tricks campaign against me unfold.”To this statement actor Arquette responded: “You say this with a straight face as Republicans roll...
CELEBRITIES・20 HOURS AGO

The former adviser to Donald Trump said Putin probably needed glasses and ate and drank nothing at a dinner she attended, where the Russian president "barely gave her a glance."
POTUS・2 DAYS AGO
The Independent

A legal effort to ban Marjorie Taylor Greene from standing for re-election has been given the go-ahead by a federal judge, who denied the far-right Georgia congresswoman’s attempt to have the case against her thrown out – paving the way for further proceedings by the end of this week.The news led Ms Taylor Greene to complain that “I have to go to court on Friday and actually be questioned about something I’ve never been charged with and something I was completely against.”Ms Greene, a hardline pro-Trump Republican who has long circulated false conspiracy theories, is accused by campaigners of...
CONGRESS & COURTS・29 DAYS AGO
ohmymag.co.uk

Vladimir Putin’s girlfriend, Alina Kabaeva, has made a rare appearance for her annual 'Alina Festival' on Saturday at Moscow’s VTB Arena, putting rumours that she was hiding in a Swiss chalet or a Siberian bunker to rest. A rhythmic gymnastics festival. Her presence at the patriotic rhythmic gymnastics...
EUROPE・24 DAYS AGO

MEXICO CITY — Mexican President Andrés Manuel López Obrador on Monday urged U.S. Latinos not to vote in November’s midterm elections for politicians who have “mistreated” them, in response to a comment by former U.S. President Donald Trump. Trump boasted at a rally in...
PRESIDENTIAL ELECTION・23 DAYS AGO
Business Insider

Sign up for the Fortune Features email list so you don’t miss our biggest features, exclusive interviews, and investigations. U.S. tariffs on Chinese imports survived a change in administration, but the trade-war-era levies may not survive record inflation. “We’re certainly looking at where we see costs being raised and,...
PRESIDENTIAL ELECTION・23 DAYS AGO
Fox News

The intelligence the U.S. shared with Ukraine helped it continue to resist Russian invading forces and even shoot down a transport plane carrying hundreds of Russian troops, a new report revealed. According to current and former U.S. officials who spoke with NBC News on Tuesday, the U.S. provided critical intelligence...
MILITARY・22 DAYS AGO
Business Insider

An attorney for the campaign said they thought they were allowed to use the funds based on a "good faith" understanding of the "highly confusing" rules.
FLORIDA STATE・18 HOURS AGO
HuffPost

The former president referenced scoring well on a cognitive test in 2018, which is designed to detect whether a person has early stages of dementia.
DELAWARE COUNTY, OH・24 DAYS AGO

International order will be thrown out the window if Russia is able to escape consequences over its invasion of Ukraine, US Gen. Mark Milley told CNN.
POLITICS・22 DAYS AGO
The Independent

Florida Republicans have compared a protest against a newly drawn congressional map that dilutes Black voter strength in the state to the violent attempt to overturn the results of the 2020 presidential election on 6 January, 2021.On 21 April, a small group of mostly Black Democratic legislators staged a sit-in protest in the middle of the House floor, singing and praying and briefly delaying votes during a special legislation convened by Republican Governor Ron DeSantis, whose map eliminates two of the state’s four districts represented by Black Democrats and creates four more districts that lean Republican.State Rep Randy Fine...
PROTESTS・23 DAYS AGO
MSNBC

Chuck Todd looks at the primary races and says that Republicans in Pennsylvania are going to be asked if they're okay with handing the keys to overseeing the 2024 election to a person who tried to invalidate a free and fair election in 2020.May 18, 2022.
PENNSYLVANIA STATE・22 HOURS AGO
Business Insider

Harvard polled Americans under 30 who are likely to vote in the midterms and found 85% of them want some government action on student loan debt.
PRESIDENTIAL ELECTION・23 DAYS AGO