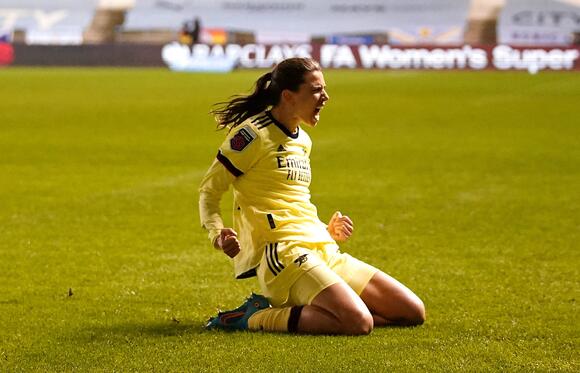 Heath drilled home in the second of six added minutes to ensure the visitors avoided a second straight defeat in the league following their shock loss to Birmingham a fortnight ago.

Khadija Shaw had given City the lead in controversial circumstances after 65 minutes, the Jamaican international tapping home from close range from Lauren Hemp’s low cross. 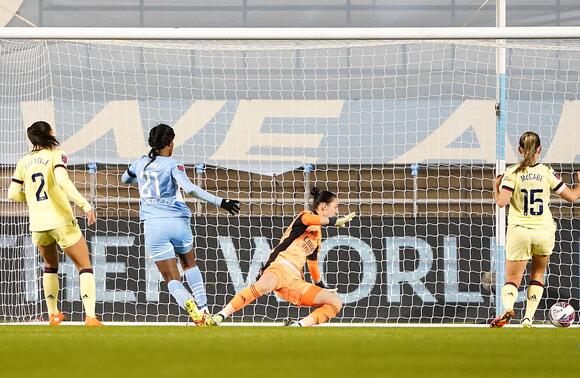 Arsenal were furious that play had been allowed to continue when the ball deflected off the referee in the build-up to the goal, but their protests fell on deaf ears and head coach Jonas Eidevall was booked for his complaints.

The result leaves Arsenal two points clear of Manchester United who had earlier kept up the pressure with an impressive 3-0 win against Tottenham.

Vilde Boe Risa volleyed the hosts into the lead after 38 minutes before Hayley Ladd netted a second ahead of the interval and Leah Galton sealed the win in the second half as United recorded their sixth victory in as many matches. 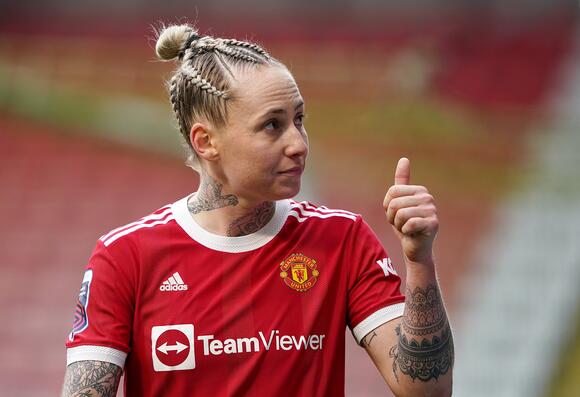 United were able to take advantage of Chelsea’s goalless draw at Brighton.

Erin Cuthbert came the closest to scoring for the Blues when her second-half strike cannoned off the crossbar.

Chelsea had 26 attempts but were unable to find a breakthrough – the first time Emma Hayes’ side have failed to find the back of the next in 60 WSL matches, a streak which stretches back to October 2018.

Aston Villa ended a four-match losing run with a 2-1 win at Leicester.

Jemma Purfield’s own goal provided the visitors with the lead after just four minutes before Leicester were back on level terms with 14 minutes remaining when Villa goalkeeper Hannah Hampton turned Purfield’s corner into her own net.

Gemma Lawley and Jade Pennock fired the Blues into a 2-0 lead inside 36 minutes.

But Justine Vanhaevermaet pulled one back in first-half stoppage time before Natasha Dowie scored Reading’s second from the penalty spot moments after the interval.

Emma Harries then completed the fightback with an impressive volley after 55 minutes.

West Ham secured a comfortable 3-0 home win against Everton to move up to seventh in the table.

Katerina Svitkova opened the scoring for the Hammers with four minutes of the opening period remaining before Dagny Brynjarsdottir doubled her side’s tally shortly before the hour mark.

Claudia Walker made sure of the victory when she netted a third in the closing stages.

Gary Lineker believes Jake Daniels will be “massively accepted” in football after coming out as gay.The Blackpool forward released a statement via his club on Monday afternoon, making him the first Briton in the men’s professional game to come out publicly as gay since Justin Fashanu in 1990, while also becoming the only openly gay male professional footballer currently active.Daniels’ move received widespread praise, with players, clubs and organisations from across the country and beyond saluting his courage.“I think he will be massively accepted,” Lineker told BBC Sport. “Not just in his own dressing room but players he plays...
SOCIETY・1 HOUR AGO
The Independent

Voices: Opinion: This is why Liverpool fans boo the national anthem and this is what would stop it

The contrast between Boris Johnson and Jurgen Klopp could not be starker. The Liverpool manager would make a great statesman. He is honest, takes responsibility, cares about people in worse situations than himself and does his best to contribute to a wider society.The prime minister is the polar opposite.When Klopp talks politics, it makes sense. When Johnson pontificates about football, it’s more of the same bluster that has characterised his entire career. On Monday, according to certain sections of the media, Johnson “slapped down” Klopp because the 54-year-old suggested it might be worth at least exploring the reasons why...
SPORTS・1 HOUR AGO
The Independent

Southampton vs Liverpool prediction: How will Premier League fixture play out tonight?

With the two cups in the bag already, Liverpool will attempt to keep their hopes of a domestic clean sweep alive when they head to Southampton on Tuesday night.The Reds must beat Saints and hope they win, and Manchester City do not, on the final day of the season at the weekend.However, even as much importance as this game therefore has, Jurgen Klopp may opt to rotate his team given the demands of going to extra time and penalties at Wembley just three days prior - and with the Champions League final also on the horizon.Southampton’s season has petered out...
PREMIER LEAGUE・2 HOURS AGO
The Independent

Is Nottingham Forest vs Sheffield United on TV tonight? Kick-off time, channel and how to watch Championship play-off semi-final

Sheffield United will aim to overturn a 2-1 deficit when they travel to Nottingham Forest in the second leg of their Championship play-off semi-final on Tuesday evening.In the first leg at Bramall Lane on Saturday, Jack Colback and Brennan Johnson found the net for Forest to put the Blades on the back foot, although Sander Berge’s injury-time goal at least gives them hope as they head to the City Ground.Paul Heckingbottom’s troops will have to overcome the weight of history if they are to book a place at Wembley, with Derby in 2019 the only team to ever lose the...
PREMIER LEAGUE・2 HOURS AGO

What the papers sayA new suitor has emerged for Robert Lewandowski, with The Guardian reporting Chelsea may enter the race for the Bayern Munich striker. The 33-year-old, whose contract with Bayern expires in 2023, could be on the move this summer, with Barcelona the current frontrunner for his signature. However, the paper says Chelsea manager Thomas Tuchel is a huge admirer of Lewandowski and the club are closely monitoring his situation.Manchester City have given Ilkay Gundogan the go-ahead to seek his fortunes elsewhere in the summer, according to the Daily Mail. The 31-year-old Germany midfielder has just one year left...
PREMIER LEAGUE・3 HOURS AGO
The Independent

Liverpool manager Jurgen Klopp expects to have to make a number of changes for his side’s crucial Premier League trip to Southampton on Tuesday.The FA Cup winners are back in action on the south coast just three days after Saturday’s draining success over Chelsea on penalties at Wembley.Key pair Mohamed Salah and Virgil Van Dijk were both forced off with injuries during the weekend showpiece and Andy Robertson, who withdrew with cramp, may not be risked.Liverpool realistically need to win to retain any hope of pipping Manchester City to the title but Klopp may be wary of the workload on...
PREMIER LEAGUE・2 HOURS AGO
The Independent

There can be a cold, clinical air to Mikel Arteta that makes him a suitable man to deliver an autopsy. Sadly for him, it was the post-mortem of a performance that all but ended Arsenal’s hopes of a top-four finish.The inquest into a season that promised more than it will deliver is beginning. Arteta began the probe into a terrible night. “We were nowhere near the level to play in the Champions League,” he said. “Newcastle were 100 times better than us in every department from the beginning to the end.” If that involved an element of exaggeration, perhaps not...
PREMIER LEAGUE・3 HOURS AGO