Falcons traded Julio Jones at right time, could Grady Jarrett be next? 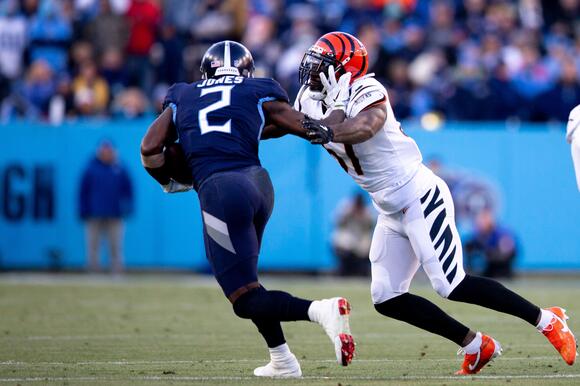 There were mixed emotions among the Atlanta Falcons fanbase when Julio Jones was traded to the Tennessee Titans prior to the 2021-22 season, but after the star wide receiver’s lackluster season, Jon Chuckery says that the Falcons made the right move at the right time.

Battling through injuries, Jones played in just 10 games this season with 31 receptions and just one touchdown—a noticeable decline in productivity following a decade of dominance in Atlanta. Chuckery explained his belief that, while Jones is a future Hall of Famer and one of the best players to ever put on a Falcons’ uniform, this lack of productivity further validates the move.

“You see now, you’re better off to make sure that you trade a guy—even one of your star players—a year too early instead of a year too late,” he said.

Now that the Titans’ season is over, the 2nd-round pick acquired for Jones will either be the 58th or 57th overall pick depending on the result of today’s Bills/Chiefs matchup. According to The Falcon Report , the Falcons get the 57th pick if the Bills win.

Regardless of the final slot, Chuckery pointed out that the player selected at that point should be able to contribute right away to a roster with plenty of holes to be filed.

“It sounds like it's a knock and a slight to Julio; it’s not. It’s just good business to have done it, and now, it's going to parlay into the Falcons having another second-round pick that’s going to be a pretty decent pick.”

Chuckery also believes that the Falcons could have a similar decision to make this offseason with DT Grady Jarrett. The seventh-year player out of Clemson is set to become a free agent after the 2022 season.

“As much as I don’t want to lose Grady Jarrett, it may make sense. First off, I’m not convinced that he’s signing back with the Atlanta Falcons," Chuckery said. "I think Grady wants to see about free agency. It’s his chance to massively cash in and get wined and dined. That doesn’t mean that he can’t end up back with the Falcons if that happens, but if I’m the Falcons, I think it's worth exploring that idea of ‘what do I get for Grady Jarrett?’

Jarrett remains the lone bright spot on a defensive line that ranks among the worst in the NFL.

Georgia football is not a one and done

Brandon Adams joined the Midday Show to discuss what sets this Georgia football program apart, and why they may not be a one-and-done as many other teams have been in the past.
ATHENS, GA・1 DAY AGO
92.9 The Game

4 Atlanta Falcons who could have breakout seasons in 2022

Jon Chuckery gives you four players for the Atlanta Falcons that could have breakout years this season, and explains why their best year could be 2022.
ATLANTA, GA・23 HOURS AGO
92.9 The Game

Watch out for DeAngelo Malone

A grand jury indicted former Georgia linebacker Adam Anderson on Tuesday and charged him with rape. Anderson will be arraigned
NFL・25 DAYS AGO
92.9 The Game

Geoff Collins is entering a pivotal fourth season at Georgia Tech, and with the addition of former Clemson quarterback Taisun Phommachanh, the offense may have gotten the shot in the arm it needed.
CLEMSON, SC・2 DAYS AGO
92.9 The Game

The Atlanta Braves have more than 1 problem right now

Atlanta Falcons Offensive Coordinator Dave Ragone describes his expectations for the offense this coming season and what has him so excited about the possibilities for that unit.
ATLANTA, GA・1 DAY AGO
92.9 The Game

Pope kings once again, sweeps Allatoona for GHSA 6A title

Under the direction of new head coach, Chris Turco, the Pope Greyhounds baseball team would sweep the Allatoona Buccaneers to claim the 2021-2022 GHSA 6A state championship.
MARIETTA, GA・1 DAY AGO
92.9 The Game

Braves’ insider Grant McCauley likes what he’s seeing from Marcell Ozuna and Adam Duvall as of late and sees an opportunity for the Braves to gain ground in the NL East with a favorable schedule on the horizon.
ATLANTA, GA・6 HOURS AGO