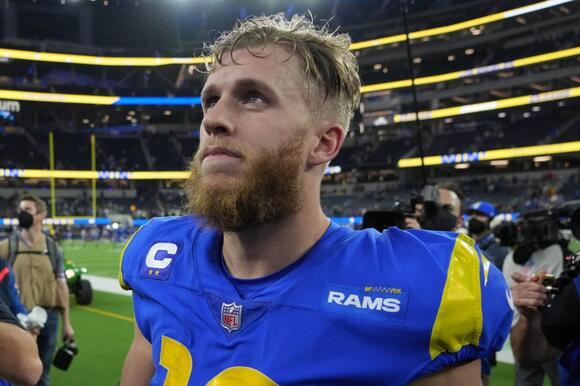 The former mid-round pick was Eastern Washington put up one of the best regular seasons for a wide receiver in NFL history.

The Tampa Bay Buccaneers found out first-hand Sunday afternoon just how good Kupp can be. That included the star pass-catcher burning cornerback Carlton Davis on a 70-yard touchdown in the second quarter of the NFC Divisional Playoff Game Sunday to give the Rams an eye-opening 17-3 lead.

Davis had no chance. He thought Cooper Kupp was going outside and the wide receiver jolted up the field — burning the corner in the process.

This touchdown gave the Rams 14-point lead as the team looks to defeat the defending champs and earn a trip to the NFC Championship Game against the division rival San Francisco 49ers .

As for Kupp, he caught two passes for 87 yards and a touchdown as Los Angeles took a two-touchdown lead early in the second quarter.

At this very same point, Tom Brady of the Buccaneers had completed just 4-of-12 passes for 50 yards.

Colin Kaepernick participated in a workout with the Las Vegas Raiders on Wednesday. The workout is undoubtedly the largest stride Kaepernick has made in returning to the NFL. But how did it go? Is Kaepernick the newest face of the franchise, and is Derek Carr’s position as the Raiders starting quarterback still intact?
LAS VEGAS, NV・1 DAY AGO
Sportsnaut

Free-agent quarterback Colin Kaepernick has not suited up in an NFL game since New Year’s Day back in 2017. That
PARADISE, NV・2 DAYS AGO

The Indianapolis Colts had no issues committing $10 million per season to All-Pro cornerback Stephon Gilmore this offseason, but now
INDIANAPOLIS, IN・1 HOUR AGO
Sportsnaut

Minnesota Vikings’ 2022 top pick Lewis Cine was recently asked which player in the league he is most looking to
MINNEAPOLIS, MN・5 HOURS AGO
Sportsnaut

Who are the highest paid NFL players? As the salary cap climbs, the top NFL salaries soar every year with
NFL・1 HOUR AGO
Sportsnaut

The Browns and David Njoku agreed Friday to a four-year contract extension worth a max of $56.75 million, including $28 million guaranteed at signing.
CLEVELAND, OH・25 MINUTES AGO
Sportsnaut

This fan blog entry was originally posted at Purple Pain Forums by MidwinterViking. I’m continuing my look back at 2021,
MINNEAPOLIS, MN・1 HOUR AGO
Sportsnaut

Deebo Samuel and the San Francisco 49ers seemingly found themselves at an impasse this offseason. The All-Pro wideout wanted a
SAN FRANCISCO, CA・4 HOURS AGO
Sportsnaut

Dallas Cowboys quarterback Dak Prescott is the latest sports figure to speak out on the tragic events in Texas earlier
UVALDE, TX・1 DAY AGO
Sportsnaut