Hands up: Outfield player to play as goalie at African Cup 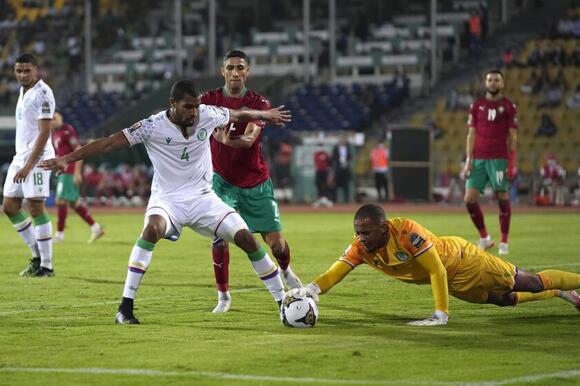 The Comoros soccer team has been giving one of its outfield players a crash course in guarding its goal at the African Cup of Nations after injuries and positive coronavirus tests left it without a goalkeeper for the biggest game in its history.

The situation is so sensitive — and unprecedented — that Comoros hasn't yet identified the player chosen to try and keep out high-scoring Cameroon in their round-of-16 game on Monday at Africa's most prestigious tournament.

On the bright side for Comoros, the chosen player has shown some potential in the position.

“We’ve already chosen an outfield player who will start as keeper,” Comoros assistant coach Daniel Padovanni said. “It’s a player who in training has shown that he can play as a 'keeper.”

No. 1 goalkeeper Salim Ben Boina is injured and Comoros' two reserve keepers are among 12 players and coaching staff members who tested positive for the virus.

Comoros is playing in its first major tournament and the tiny Indian Ocean island nation shocked everyone by qualifying for the knockout stage on its debut. It beat four-time champion Ghana on the way to become one of the stories of the African soccer championship.

But it now faces a huge challenge against Cameroon, which scored seven goals against regular goalkeepers in its three group games, more than anyone else.

Comoros is in the awkward position because of rules released by the African soccer confederation ahead of the start of the tournament to ensure the schedule isn't ruined by virus outbreaks in squads.

Just about every team in Cameroon has had positive cases during the tournament.

In the rules, teams must play a game if they have a minimum of 11 players fit and healthy, even if there are no goalkeepers available. Another player must fill in.

Comoros coach Amir Abdou was among those who tested positive, meaning the team is also set to be without him on the sidelines against Cameroon.

It will be the first time an outfield player will start as a goalkeeper at a major international tournament. Players have previously had to fill in as goalkeeper during matches, including once already at this tournament.

Ivory Coast defender and captain Serge Aurier briefly had to throw on a goalkeeper jersey and gloves near the end of a group game against Sierra Leone after goalkeeper Badra Ali Sangaré was taken off injured and Ivory Coast had used up all its substitutions.