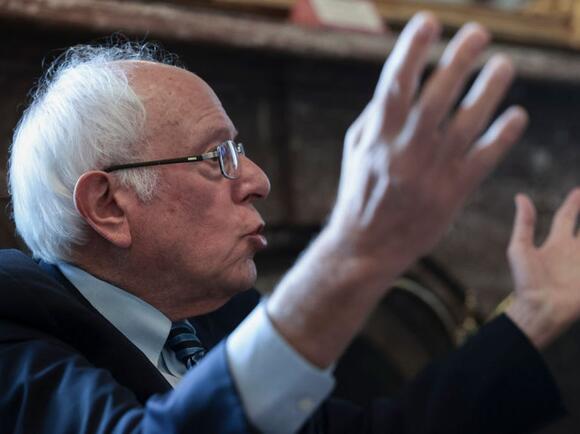 Sen. Bernie Sanders on Sunday said Senate Republicans are "laughing all the way to Election Day" since Democrats have yet to schedule a vote on the party's signature social-spending bill which has languished in the upper chamber due to intraparty divisions.

During an interview on CNN's "State of the Union," the Vermont independent and chairman of the Senate Budget Committee said Senate Republicans have essentially been left off the hook in casting votes for consequential pieces of legislation as lawmakers look toward the November midterm elections.

"What has bothered me very much is the Republicans are laughing all the way to Election Day," he said. "They have not had to cast one bloody vote — which shows us where they're at. And we have got to change that."

While the Senate easily passed the $1.2 trillion bipartisan infrastructure bill championed by President Joe Biden last year, the larger social-spending bill — which was originally pegged at $3.5 trillion before it was whittled down to roughly half of that amount — fell victim to opposition by Sen. Joe Manchin of West Virginia and a lengthy back-and-forth with Sen. Kyrsten Sinema of Arizona.

Manchin backed many of Biden's climate provisions, along with expansion of the Affordable Care Act and universal pre-K, but balked at extending the monthly child tax credit program without major changes. The senator appeared on Fox News in December to oppose the Build Back Better bill, despite efforts by Biden officials to stop him.

Manchin's counteroffer to the White House for a smaller social-spending bill was reportedly off the table earlier this month, but last week, the senator said that renewed talks regarding the legislation would be "starting from scratch."

Biden said during a Wednesday press conference that he believed parts of the Build Back Better framework could pass Congress before the midterm elections.

"I'm confident we can get pieces, big chunks of Build Back Better signed into law," Biden said.

During the CNN interview, Sanders said the Senate should hold floor votes for individual components of the larger social-spending bill, which would allow members to clarify their respective positions.

He added that Democrats could craft a bill with the initiatives that are able to clear the upper chamber, pointing to the popularity of many of the party's policies among the American public.

"People want to expand Medicare. People want to deal with the crisis of climate," he said. "So what we are talking about is what the American people want. And I think, when you bring bills on the floor — we have allowed the Republicans to get away with murder."

Sanders — who said earlier on Sunday that he backed the Arizona Democratic Party's decision to censure Sinema over her refusal to change filibuster rules to pass voting-rights legislation — stated that Republicans need to have their votes on the record.

"They haven't had to vote on anything," he said. "Now, if they want to vote against lowering the cost of prescription drugs, expanding Medicare, dealing with child care, dealing with housing, let them vote, and let Manchin and Sinema decide which side they are on."

He added: "And when all of that shakes out, we will see where we are. I have the feeling that we will be able to get 50 votes or more on some of these issues. We could put that piece together and then pass something that's very significant."

So first you don’t invite the Republicans to craft a bill and then you complain when they AND members of your own party don’t support the bill. Then you blame the republicans. Maybe you should look in the mirror!

The only thing Bernie wants is to promote his Socialist agenda. I fought the socialism when in the Military we don't want that in our Country. What can you expect from him he had his Honeymoon in a Communist Country.

No Bernie Americans don't support Brandon's agenda. We don't want more waste of taxpayers money. We don't want freebies going to people that don't contribute anything to the system. Somebody has to pay for all this waste and it's the people that are trying to support themselves . Brandon increased food stamp benefits by 5 times what it was when he took office. Yeah, we know that you liberals think that you have all the answers but everyday Americans know that you don't. Vote Red in '22 . Bernie's perception of what Americans want is a prime example of why we need major changes

Republicans haven't said what kinds of abortion restrictions they would back if they took control of Congress in November.
FLORIDA STATE・3 DAYS AGO
Business Insider

The RNC intervened against Oz's opponent Dave McCormick's lawsuit to count mail ballots without a handwritten date in their razor-thin primary.
PENNSYLVANIA STATE・11 HOURS AGO
WashingtonExaminer

"Madison had some issues that came out," McDaniel said on Sunday. "He was a rising star in our party and we need to make sure we retain that seat."
CONGRESS & COURTS・2 DAYS AGO
WashingtonExaminer

EXCLUSIVE — Archbishop Wilton Gregory of the Archdiocese of Washington, D.C., has refused to comment publicly on whether he supports the barring of House Speaker Nancy Pelosi (D-CA) from receiving Holy Communion in light of her stance on abortion, with his office saying in a blunt and mistakenly sent email to the Washington Examiner that requests “will be ignored.”
WASHINGTON, DC・1 DAY AGO
Salon

Rep. Marjorie Taylor Greene (R-GA) speaks to supporters of former U.S. President Donald Trump at the Banks County Dragway on March 26, 2022 in Commerce, Georgia. This event is a part of Trump's Save America Tour around the United States. (Megan Varner/Getty Images) On Monday, CNN's Andrew Kaczynski and Em...
COMMERCE, GA・28 DAYS AGO

"It's like the disinformation board on steroids. Another way to look at is the Patriot Act for American citizens," Sen. Josh Hawley said.
BUFFALO, NY・2 DAYS AGO
Business Insider

"It would concern me," Gates told CBS News in an interview regarding former President Trump pursuing the White House again. "That's where I am."
PRESIDENTIAL ELECTION・2 DAYS AGO
Business Insider