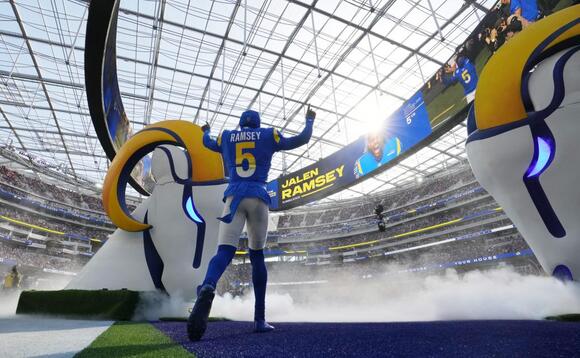 You can tell Jalen Ramsey is stoked for Sunday afternoon’s Los Angeles Rams Divisional Round matchup vs the Tampa Bay Buccaneers. Why would we make such an obvious statement?

It’s an easy deduction when you see his Twitter account , where he shared a hype video that should get all Rams fans pumped up for today’s matchup. Here’s the video.

For anyone who’s curious, the song in the background is set to pushin’ P by Gunna & Future, featuring Young Thug. It can be found on Gunna’s album titled DS4EVER.

Unfortunately, he’s up against the greatest quarterback of all time in Tom Brady , who already has seven Super Bowl rings of his own. Despite some retirement rumors , TB12’s focus will be 100% on the matchup at hand.

We’ll see how many opportunities Ramsey receives, how many times Brady dares throw his way. Ramsey has yet to intercept a Tom Brady pass across three career matchups.

In Ramsey’s first career playoff game he got an interception but hasn’t been able to haul one in since. That could change today. So far, Ramsey has four picks this season and Brady has thrown just 12.

The game kicks off at 3:00 PM EST and can be seen on NBC and Peacock streaming devices, in addition to Universo. If there’s one thing to expect, it’s an amped-up group on both sides, as it’s win or go home. The Buccaneers are favored by 2.5 points according to DraftKings.

Kansas City Chiefs superstar tight end Travis Kelce knows he is not paid on a level equal to his production,
KANSAS CITY, MO・1 HOUR AGO

The Las Vegas Raiders gave Colin Kaepernick an opportunity to find his way back into the NFL in the form
LAS VEGAS, NV・23 HOURS AGO
Sportsnaut

The Sugar Bowl will be played on New Year’s Eve at 12 noon ET on Dec. 31 next season, rather
NEW ORLEANS, LA・18 HOURS AGO
Sportsnaut

After five seasons entirely out of football, former San Francisco 49ers quarterback Colin Kaepernick is back in action. Or at
SAN FRANCISCO, CA・19 HOURS AGO

Brett Hundley signed with the Baltimore Ravens and joined the voluntary organized team activities, a portion of the offseason program
BALTIMORE, MD・1 DAY AGO

Minnesota Vikings general manager Kwesi Adofo-Mensah has faith in his starting quarterback Kirk Cousins, but he also understands that the
MINNEAPOLIS, MN・22 HOURS AGO
Sportsnaut

Colin Kaepernick worked out for the Las Vegas Raiders this week, a potential first step towards making an NFL comeback.
ANN ARBOR, MI・4 HOURS AGO
Sportsnaut

Washington Commanders owner Daniel Snyder is under investigation from the F.T.C., NFL and Congress for various allegations of sexual harassment
NFL・1 HOUR AGO
Sportsnaut