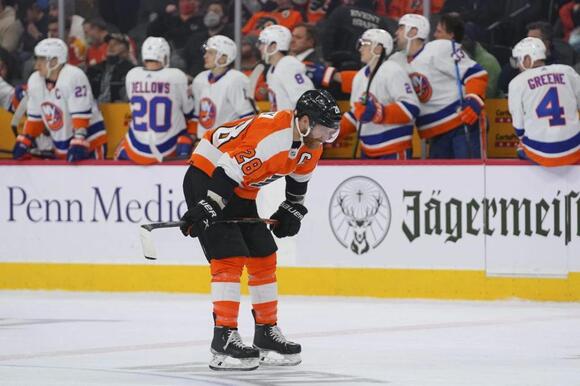 The 2021-22 season continues to careen in the wrong direction for the Philadelphia Flyers.

On Monday, the Flyers will look to snap an 11-game losing streak when they host the Dallas Stars. The Flyers also dropped 10 in a row from Nov. 18-Dec. 8.

Philadelphia’s 11th straight defeat, a 6-3 loss Saturday on the road against the Buffalo Sabres, was especially distressing. That’s because the Sabres had lost nine consecutive games at home before exploding for six goals.

“I think we’re all in this together,” said captain Claude Giroux, who scored two goals against the Sabres. “Right now, it feels like we’re hitting rock bottom and it just feels like we can’t catch a break. We do a lot of good things out there, but when something bad happens, it’s really bad.”

The Flyers have been besieged with injuries, most notably to Sean Couturier, Ryan Ellis and Joel Farabee. But every team has been dealing with injuries and COVID-19 issues.

“Lose 10 in a row, you come into Buffalo and you lay a goose egg, it’s embarrassing,” Scott Laughton said. “It’s tough right now. We need to find a way, and the only guys who are going to get us out of it are the players. We’ve got to come to work tomorrow, have a good practice and be ready.

“There’s not much else to say. We’ve got to get ourselves out of this. It’s not acceptable at this level,” Laughton added.

The Stars will be searching for their third straight victory when they visit the Flyers.

In their most recent game Friday, the Stars traveled to Detroit and defeated the Red Wings 5-4 in overtime. They’re 2-0 on this four-game road trip, though the wins haven’t been pretty.

“We’re certainly not happy giving up four goals, but we’re certainly happy we scored five,” Stars coach Rick Bowness said. “We have to tighten up. We’re trying to find ways to win 2-1, 3-2, but if we can find a way to score four or five goals, we want to do that. But there’s too many goals going in our net.”

Dallas had lost seven in a row on the road before this stretch and it has compiled only six road victories all season. But suddenly, the team is finding ways to win and that’s something to build on.

“What we said before we started this road trip is what’s done is done,” Bowness said. “None of us are happy with the road record, but you put it behind you, and you move forward. That’s two big road wins in a row, and we need a few more. We need that fight that we saw tonight.”

The win at Detroit was choppy for big stretches. When the season is complete, no one will remember how the two points were added to the total.

“That’s not the way how we want to play,” Joel Kiviranta said. “We try to keep low score and defense tight. But I think the main thing is we still got the two points from today.”

Matt Colburn II rushed for 140 yards and three touchdowns to lead the Philadelphia Stars to a 35-28 victory over
BIRMINGHAM, AL・2 HOURS AGO
Sportsnaut

The NHL season officially started back on October 12. In this article, we track all the NHL games today as
MLS・14 HOURS AGO
Sportsnaut

Zach Hyman scored the game-winning goal with Edmonton short-handed midway through the third period, and the Oilers evened their Western
NHL・19 HOURS AGO
Sportsnaut

The Tampa Bay Lightning have been in this situation before. Almost a year ago exactly, in fact. The Lightning will
TAMPA, FL・8 HOURS AGO

The St. Louis Cardinals arrive in Pittsburgh on Friday for the start of a series against the Pirates looking to
SAINT LOUIS, MO・2 DAYS AGO
FastBreak on FanNation

The Golden State Warriors have announced their injury report for Game 3 against the Dallas Mavericks.
SAN FRANCISCO, CA・22 MINUTES AGO

Down 2-0 in the Western Conference finals, the Dallas Mavericks have an aggressive game plan for Game 3 at home
SAN FRANCISCO, CA・2 HOURS AGO
Sportsnaut

The St. Louis Cardinals are undertaking a youth movement during their road series this weekend against the Pittsburgh Pirates, but
SAINT LOUIS, MO・14 HOURS AGO
Sportsnaut

Through two games, the Carolina Hurricanes are getting just enough offense while their defense is hardly giving the New York
RALEIGH, NC・7 HOURS AGO
Sportsnaut

Yadier Molina drove in two runs and Adam Wainwright continued his mastery of the Pittsburgh Pirates in the visiting St.
SAINT LOUIS, MO・23 HOURS AGO