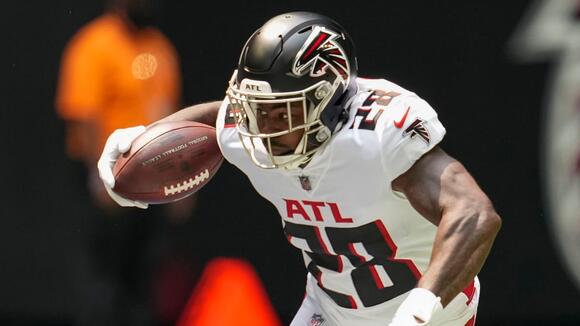 Davis is an impending free agent this offseason.

The Atlanta Falcons face a lot of difficult decisions this offseason, and one of them comes with hometown running back Mike Davis.

Davis, who turns 29 next month, has one year left on his contract.

That means the Falcons could save $1.75 million against the cap if they were to part ways with Davis prior to the 2022 season.

Don't be surprised if that happens. The Falcons could cut him, and then offer him a contract at a lower base salary, or they could go in an entirely new direction.

Davis was brought in last offseason to be the team's lead running back, but struggled in his first year in Atlanta. He ran for 503 yards and three touchdowns while playing in every one of Atlanta's 17 games.

The decision the team makes with Davis will likely have some effect on what the team decides to do with Cordarrelle Patterson, the team's breakout star who is an impending free agent. Patterson will warrant more than the $3 million he signed for last offseason, and that raise may come out of Davis' paycheck.

However, if the team is unable to retain Patterson, it could increase Davis' chances of staying with the Falcons for a second season.

There is also the chance the team wipes the deck clean and goes with a new group of backs, possibly finding one through the draft . But for the time being, Davis is in roster limbo.

The Falcons legend had some words for the Alabama coach.
TUSCALOOSA, AL・21 HOURS AGO
Falcon Report

The Falcons aren't looking too good in these power rankings.
ATLANTA, GA・1 DAY AGO
Falcon Report

Jones was cut by the Tennessee Titans earlier in the offseason.
ATLANTA, GA・23 HOURS AGO
Falcon Report

Do the Falcons have the best fans in the NFL?
ATLANTA, GA・2 HOURS AGO

Falcons coach Arthur Smith may oversee a rebuilding situation, but he's all about winning.
ATLANTA, GA・1 DAY AGO
Sportsnaut

A grand jury indicted former Georgia linebacker Adam Anderson on Tuesday and charged him with rape. Anderson will be arraigned
NFL・23 DAYS AGO
Falcon Report

Which undrafted players have the best chance to play on Sundays?
ATLANTA, GA・22 HOURS AGO
Yardbarker

Warriors look to pour on the D against the Mavs

This time of the year for NBA and NHL fans is a nightly treat with big moments. Thursday's playoff action gave us a last-second goal by Tampa to win and a commanding victory from the Celtics to even the series. As we look to tonight's Game 2s, we can't help...
NBA・36 MINUTES AGO