This Is Why You Always Have Those Dry, Crusty Boogers 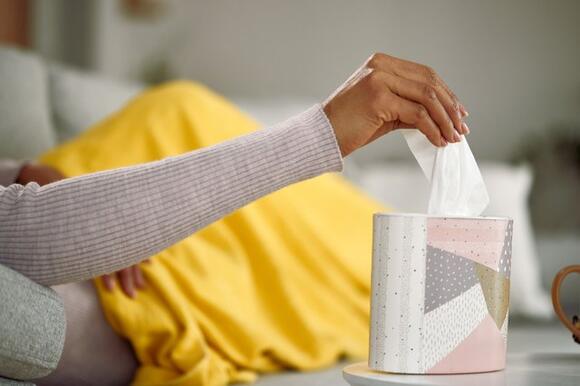 The only thing worse than having a dry booger once in a while is being plagued by dry boogers in your nose every day. That feeling like something is constantly stuck in your nose can be distracting or straight-up uncomfortable.

But there's good news: Dry, crusty boogers (experts use the term "nasal crusting") usually happen for specific reasons. And once you can pinpoint the cause, you can be on your way to clearer, happier nasal passages, because scabby boogers aren't usually a big deal and tend to be easily remedied.

Here's a look at some of the most common culprits, plus how to keep nose scabs at bay. Plus, learn when nasal crusting could indicate a serious problem.

If your crusting tends to be the worst when you first wake up and isn't accompanied by any other symptoms, your bedroom environment could be to blame.

Dry indoor air , which is especially common in the winter, can cause the mucus in your nose to lose moisture, says Kathleen Kelly, MD , an otolaryngologist at The Ohio State University Wexner Medical Center. And that can easily give you a case of the crusties.

2. Healing From a Nosebleed

A hard, outer booger shell is annoying, but it can be there to do your body good.

Case in point? Sometimes a crusty outer layer will form when your nasal tissue is healing from an injury, like a nosebleed, Dr. Kelly points out.

Nonallergic rhinitis is basically the catch-all term for nasal gook that forms for reasons other than allergies. Sometimes the cause can be a virus (like a cold), but exposure to triggers like smoke, spicy food , certain odors and even some medications can cause the lining of the nose to become inflamed and mucus-filled, according to the Cleveland Clinic .

Usually the mucus stays pretty drippy, but in rare cases, it's possible for the mucus to become hard, dry and foul-smelling.

Deviated septums happen when the septum — the thin wall that divides the nose — is off-center. Some people are born with them, but the condition can also develop as the result of an injury, according to the Cleveland Clinic .

Often deviated symptoms go completely unnoticed. But severe ones can make it harder to breathe and cause the nasal passages to dry out, which can result in crusting or bleeding, notes the Mayo Clinic .

Sometimes nasal surgeries can cause side effects like crusting. It most often happens when a person undergoes turbinate surgery, a procedure that helps improve airflow through the nose, according to a January 2015 review in ​ Current Allergy and Asthma Reports . ​

Experts don't fully understand the reason, but in rare cases, turbinate surgery can lead to empty nose syndrome, a condition that actually makes nasal breathing harder and leads to dryness and crusting, the review notes.

In rare cases, unusually dry, crusty boogers could be related to an underlying autoimmune condition such as granulomatosis with polyangiitis. The disorder causes inflammation of the blood vessels in several areas of the body, including the nose, according to the Cleveland Clinic . That can lead to crusty or pus-like nasal drainage and frequent sinus infections , as well as other symptoms like coughing, shortness of breath, fever, joint pain, numbness, skin sores and rashes.

Granulomatosis with polyangiitis can become serious quickly, because it can affect the health of blood vessels in the organs, according to the Mayo Clinic . If you notice possible symptoms, see a doctor right away.

What to Do About Dry Boogers

Blowing your nose is a better bet than trying to pick out dry boogers, Dr. Kelly says. Grabbing a scab could potentially injure your nasal lining and cause bleeding, not to mention introduce germs into your nasal cavity that can make you sick.

If you've got a dry booger lodged in your nostril, softening and hydrating the crust will help it come out more easily. A nasal saline rinse or spray, or inhaling steam from the shower should do the trick, per Harvard Health Publishing . For crust around the edge of your nostril, try applying a warm, moist washcloth to your nose for a few minutes, per the National Institutes of Health (NIH).

As for keeping those crusties from coming back? Be proactive about keeping your nasal passages well-hydrated, Dr. Kelly recommends. Run a humidifier at 30 to 50 percent humidity to add more moisture to your indoor air, per the NIH .

You can also get in the habit of adding moisture to your nostrils with a nasal saline spray, which has the added benefit of clearing out mucus before it has the chance to crust up.

Finally? Drink plenty of water. The more H2O that goes into your body, the more that's available to help those nostrils stay moist and comfortable, per Harvard Health Publishing .

When to See a Doctor

Dry, crusty boogers aren't a big deal if they only pop up once in a while and are easy for you to get rid of. But you should touch base with your doctor if at-home methods aren't kicking the crusting to the curb or if you feel like the boogers are making it harder for you to breathe, Dr. Kelly says.

Seek medical attention, too, if the crustiness is accompanied by pus, nosebleeds or coughing up blood, recommends the Mayo Clinic . These could be signs of an underlying disorder such as granulomatosis with polyangiitis.

Want to Age Well? Do This as Soon as You Get Out of Bed Every Morning

Forget the wrinkle-smoothing creams and anti-aging serums. The secret to growing old gracefully comes straight from your sink. Yep, water helps keep every system in your body working smoothly. So, when you don't get enough of it, you'll eventually run into problems, especially as you age. Indeed, dehydration is a...
HEALTH・3 DAYS AGO
LIVESTRONG.com

Exercise is one of the best things you can do for your joints. Movement helps deliver synovial fluid, which nourishes your joints with important nutrients and prevents friction between them, according to the U.S. National Library of Medicine. But not all exercises are good for your joints, and some can...
WORKOUTS・17 DAYS AGO
LIVESTRONG.com

Most wild cherries are edible, but it can be easy to confuse fruit in the forest. A wild cherry tree is poisonous, so avoid the leaves, pits, bark and stem.
FOOD & DRINKS・13 DAYS AGO
House Digest

Though helpful for cleaning and disinfecting, Lysol contains a number of harmful chemicals that can irritate your eyes, skin, and respiratory system.
HEALTH・29 DAYS AGO

Christine Bronstein took at home colon cancer test after seeing blood in her stool. It was positive, but her doctor texted: "You don't have cancer :)"
CANCER・29 DAYS AGO
LIVESTRONG.com

Feeling shaky or trembling after waking up in the morning or from a nap can be worrisome experience. Here's why it might happen and what you can do about it.
HEALTH・16 DAYS AGO
LIVESTRONG.com

It's not all about fiber. Gastros say eating fish, seeds, oils and other healthy fats for gut health may promote bacterial diversity and lower inflammation.
NUTRITION・10 DAYS AGO
LIVESTRONG.com

Carbs have been criticized over the last couple of years. And while eating too many refined, highly processed carbs (which can cause quick blood sugar and insulin surges and crashes) isn't good for you, other types of carbs can likely lengthen your lifespan. Indeed, healthy complex carbs (which are digested...
NUTRITION・17 DAYS AGO

The Nutritional Value of Cherries: Calories, Vitamins and More

The nutrition and calories in 20 cherries make them a great snack. Sweet cherries, black cherries and acerola cherries have similar calories and nutrition info.
NUTRITION・8 DAYS AGO
LIVESTRONG.com

These are the best fiber supplements for diverticulosis and non-symptomatic diverticulitis, including the best powder, capsules, chewable and best on a budget.
NUTRITION・11 DAYS AGO
LIVESTRONG.com

The 6 Best Home Remedies for Bunions

A podiatrist shares which home remedies for bunions actually work to help relieve pain and keep the condition from getting worse. Plus, when to see a doctor.
NEW YORK CITY, NY・9 DAYS AGO
LIVESTRONG.com

These 3 Exercises Build the Foundation for Six-Pack Abs

The McGill Big 3 is a series of back stabilization exercises created by Stuart McGill. Find out how to perform the bird dog, curl up and side bridge properly.
WORKOUTS・7 DAYS AGO
LIVESTRONG.com

The 7 Best Body Pillows, According to Sleep Experts

All pillows provide support and comfort during a night's sleep, but body pillows take both features up a few notches. As their name suggests, these oversized pillows are designed to wrap around your entire body and cradle you in a supportive way that helps with proper rest, especially when you need a little extra (think: pregnancy, injury, surgical recovery).
AMAZON・8 DAYS AGO
LIVESTRONG.com

Struggling With Push-Ups? 5 Exercises to Help You Nail This Move

To improve your push-ups, start with proper push-up technique and incorporate a few other essential exercises to help you develop necessary push-up strength.
WORKOUTS・5 DAYS AGO
LIVESTRONG.com

Too Anxious to Sleep? Here's How to Tell if It's Somniphobia

When you were little, you might've been afraid to drift off to dreamland, worried about a monster under your bed. As adults, most of us outgrow this nighttime fear. But for people with somniphobia, falling sleep still triggers terror. Sometimes referred to as "sleep dread," somniphobia is a specific type of anxiety or fear related to sleep that typically increases as bedtime approaches, says sleep expert Wendy Troxel, PhD, a senior behavioral and social scientist at the RAND Corporation and author of ​​Sharing the Covers: Every Couple's Guide to Better Sleep​​.​
MENTAL HEALTH・2 DAYS AGO
LIVESTRONG.com

The 6 Best Multivitamins for Older Adults

Here are the best multivitamins for seniors from brands such as Thorne, Bayer One a Day and Smarty Pants, and why older adults need more of certain nutrients.
NUTRITION・5 DAYS AGO
LIVESTRONG.com

If alcohol is going to be a part of your dinner or an evening with friends, it's important to have a plan — not only on how you get home, but also to keep yourself from feeling tipsy too quickly. First things first — it's never a good idea...
DRINKS・4 DAYS AGO
LIVESTRONG.com

The 6 Best Home Remedies for Sunburn, and 3 to Skip

A dermatologist breaks down the best home remedies for sunburn pain, redness and itching and explains which treatments to avoid if you want sunburn relief.
SKIN CARE・14 DAYS AGO