How the next COVID variant may emerge 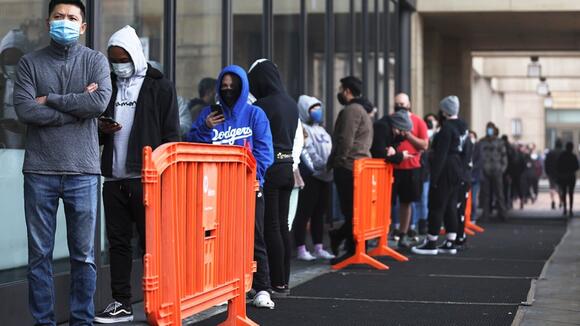 (NEXSTAR) — The U.S. is currently in the grips of the latest COVID-19 variant, and many experts believe it won’t be the last before the end of the pandemic.

Omicron, designated as a variant of concern (VOC) by the World Health Organization, has all but pushed delta to the side, at least as far as sequencing efforts in the U.S. are suggesting. But viruses are constantly mutating, and a widespread virus — like the one that causes COVID-19 — has a better chance of gradually evolving from host to host and producing concerning variants.

Davidson Hamer, a professor of Global Health and Medicine at the Boston University’s Schools of Public Health and Medicine, told Nexstar that one of the potential mechanisms for the creation of a new variant concerns the animal population.

“Because (the virus that causes COVID-19) can infect certain animals — some very well, like mink or white-tailed deer — the virus could go into an animal, reassort and pop back out into the human population,” Hamer said.

“That could be a potential mechanism by which a new variant might arise, and a very worrisome possibility,” he added.

Another potential avenue that epidemiologists have identified involves immunosuppressed, or immune-deficient human patients who become chronically infected with the virus, but do not succumb to it.

“People who are immunosuppressed have a harder time clearing the virus from their bodies, and many mutations may accumulate in a single person and then be transferred to others,” explained Jorge Salinas, an assistant professor of infectious diseases at Stanford University.

Experts also say this mechanism — incubating in a chronically sick patient — is thought to be the avenue by which the omicron variant and its numerous mutations came about.

Researchers say it’s difficult to predict where and when a new variant will emerge. And when they do, it doesn’t always mean the variant is better adapted to spread. There is always the possibility, however, that one of the variants could transmit better, or be more severe, or have properties that make it better at evading immunity or become less responsive to current therapies.

How many times can you reuse a mask before replacing it?

George Rutherford, an epidemiologist at the University of California, San Francisco, likened a virus’s mutations to “typos,” some of which are more harmful than others.

“If viral evolution were logical, which it is kind of, we would expect … the variants that would survive and thrive would be more transmissible or more immune evasive,” said Rutherford. But there’s also “no premium” for a virus to kill off its host immediately, he said, as that wouldn’t be an efficient way for the virus to spread.

Rutherford warned, however, that virus mutations won’t always follow the most logical path.

“Be prepared,” he said. “The (next mutation) could be something that’s very different.”

Authorities in metro Grand Rapids have found a 14-year-old who was missing and considered endangered.
GRAND RAPIDS, MI・2 DAYS AGO
WOOD TV8

Two of a total of eight people believed to have been involved in a shootout after a graduation ceremony at East Kentwood High School were formally charged Monday.
KENTWOOD, MI・2 DAYS AGO
Insider

Expectant mothers in quarantine are only given two painkiller pills a day — the same treatment given to all COVID-19 patients, sources told RFA.
PUBLIC HEALTH・1 DAY AGO

Though helpful for cleaning and disinfecting, Lysol contains a number of harmful chemicals that can irritate your eyes, skin, and respiratory system.
HEALTH・29 DAYS AGO
The Independent

A top US official in the Pacific has warned that America would have to “respond” if the Solomon Islands allows China to establish a military base there.Following a “constructive and candid” 90-minute meeting with prime minister Manasseh Sogavare, ambassador Daniel Kritenbrink said that the security deals between China and the Solomon Islands present “potential regional security implications” for the US and other allies.“We wanted to outline for our friends in the Solomons what our concerns are,” Mr Kritenbrink, US assistant secretary for East Asian and Pacific Affairs, told reporters.“We have respect for the Solomon Islands’ sovereignty. But we also...
FOREIGN POLICY・29 DAYS AGO
Salon

A plethora of downright bizarre scientific research from the Department of Defense previously kept under wraps has been uncovered, revealing an array of peculiar schemes proposed by the United States military. One outlandish proposal suggested detonating nuclear bombs on the moon to create a tunnel through it. Millions in taxpayer dollars were spent on the research, which appears to have relied on a contractor, Bigelow Aerospace Advanced Studies, which was owned by multi-millionaire Robert Bigelow, a hotel impresario. The public was kept in the dark until now regarding what research was being funded.
ASTRONOMY・29 DAYS AGO
US News and World Report

We’re not going back to normal. We died in normal: America needs to face health inequity

In a follow-up on the 14th Ebola Virus Disease (EVD) outbreak in the Democratic Republic of the Congo (DRC) (HERE and HERE), the World Health Organization (WHO) tweeted today:. Health authorities in #DRC confirmed a 2nd case of #Ebola in Mbandaka on 25 April. The 25-year old woman, now deceased, began experiencing symptoms 12 days earlier. Investigations indicate that as the 1st case patient’s sister-in-law, she was a high-risk contact.
PUBLIC HEALTH・29 DAYS AGO
WOOD TV8

Police: Driver in deadly crash fled from other scene

The man responsible for a drunken driving crash that killed one teenager and seriously injured another was cited for fleeing the scene of a different crash.
WYOMING, MI・2 DAYS AGO
MedicalXpress

Shielding those vulnerable to COVID-19, while allowing the virus to spread, largely unmitigated, through the rest of the population, would have failed according to a new modeling paper published today in PLOS Global Public Health by University of Bath scientists. Shielding strategies or "focused protection", as advocated for in the...
SCIENCE・29 DAYS AGO

A woman accused of killing a man in Portage earlier this year told police she strangled him after he attacked her, court documents show.
PORTAGE, MI・2 DAYS AGO
WOOD TV8

In a past interview with Guitar World, Cobain said the Mustang was his favorite guitar “in the whole world."
GRAND RAPIDS, MI・2 DAYS AGO
WOOD TV8

Police have released the names of a woman and man killed in a murder suicide that happened on Saturday.
MUSKEGON, MI・5 HOURS AGO
WOOD TV8

A man accused of injuring a woman in a Newaygo-area shooting in 2021 has pleaded no contest to charges.
NEWAYGO, MI・10 HOURS AGO
WOOD TV8

There have been 1,322 individual school shootings in the United States since 1970s, resulting in 426 deaths and 1,225 injuries.
PUBLIC SAFETY・7 HOURS AGO
WOOD TV8

Customers tell News 8 that they were charged more than once for groceries and gas purchases — a problem some say happened at other stores in the area.
GRAND RAPIDS, MI・2 DAYS AGO
WOOD TV8

The Palisades Nuclear Power Plant near South Haven is on the road to being decommissioned.
COVERT TOWNSHIP, MI・1 DAY AGO