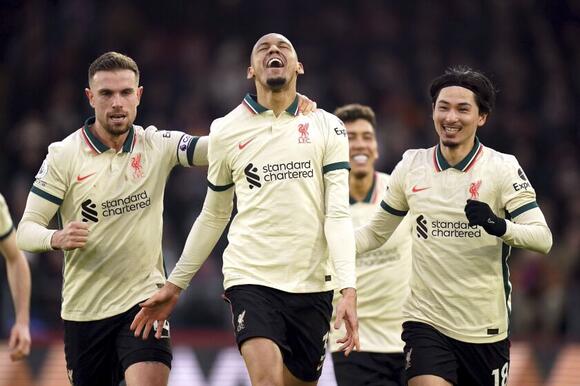 Liverpool reduced the gap at the top of the Premier League to nine points after a 3-1 win at Crystal Palace on Sunday.

Virgil Van Dijk and Alex Oxlade-Chamberlain scored in the first half but Patrick Vieira’s side reduced the deficit through Odsonne Edouard's goal after the break.

It took a string of saves by Liverpool goalkeeper Alisson Becker to keep the lead for the visitors before Fabinho scored a penalty in the 89th minute to seal the win that took advantage of leader Manchester City drawing at Southampton on Saturday.

This was Liverpool’s fifth game without Mohamed Salah and Sadio Mane while they are at the African Cup of Nations.

Andrew Robertson’s corner created the opener for Van Dijk's header in the eighth minute. It was a poor goal for the hosts to give away and they could not handle Liverpool’s relentless pressing in the opening exchanges with Oxlade-Chamberlain firing off target twice in quick succession.

But then Robertson spotted the late run of Oxlade-Chamberlain into the area and picked out his teammate with a superb crossfield ball. The midfielder, back after a minor ankle injury, controlled on his chest and rifled into the net in the 32nd.

Jordan Henderson could have put the game to bed at the start of the second half but he fired wide on the turn after another fine delivery from Robertson.

Palace did finally get on the scoresheet in the 55th. Jean-Philippe Mateta beat the offside trap to collect Jeffrey Schlupp’s excellent through ball and squared for Edouard to tap in for his sixth goal of the season.

Joachim Andersen was the next to go close for Palace with a long-range strike that whizzed just wide before Schlupp fired into the side-netting.

The big moment arrived with seven minutes left when Andersen sent Michael Olise away and his lobbed effort was brilliantly tipped wide by Alisson, who clattered into the post.

Liverpool's Diogo Jota went through minutes later but missed his kick and then collided into goalkeeper Vicente Guaita.

After referee Kevin Friend had waved away appeals, VAR called for the official to have another look and he pointed to the spot.

Fabinho tucked away the penalty with a minute left to close the gap on City, with Pep Guardiola’s side having also played a game more than Liverpool, which visits the Etihad in April.