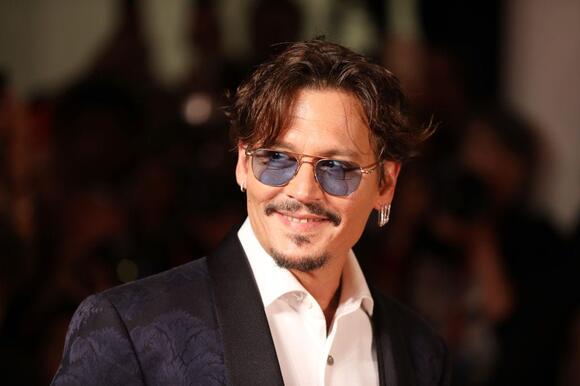 Johnny Depp might have to pull some of Jack Sparrow’s puffy shirts out of his wardrobe again.

Depp will take on the role of King Louis XV in an upcoming film directed by French actress-turned-director, Maiwenn (“Polisse,” “Mon Roi”). While the “Pirates of the Caribbean” star has been a bit off the American movie radar of late, his next project, while still European-produced (France, to be exact), sounds like the stuff of a hit.

The film will begin shooting this summer, and so far the plot and even the title have been kept secret. But the source material for the film would seem to be a juicy role for Depp.

King Louis XV’s reign was the longest (59 years) in the country’s history, after his predecessor, Louis XIV. He was nicknamed “the beloved” as he lorded over a period of expanding power for France. Ultimately though, he made controversial political and personal decisions, and by the time of his death was highly unpopular. His reign was fuel for the uprising of the French Revolution.

Depp too has had a somewhat similar, if not exactly as consequential, decline in his profile for a while.

There was the domestic violence accusation from ex-wife Amber Heard; and he had a libel case against UK tabloid, The Sun. Partly because of these various controversies – and lagging returns on Hollywood productions like “Dark Shadows” and “Fantastic Beasts and Where to Find Them” – he’s mainly surfaced in smaller European productions. His last movie was Andrew Levitas’s 2020 film, “Minamata,” about war photographer W. Eugene Smith.

As Variety reported , his reputation in Europe has not taken a hit. He recently received honorary awards at the Karlovy Vary Festival and San Sebastian Film Festival. And in 2020, Depp was also celebrated at the Deauville American Film Festival and received an award from the hands of Catherine Deneuve.

Following the trajectory of his film work and the personal controversies over the last few years, the character of King Louis XV might be relatable for the star, and seems like the kind of meaty, serious role that could land Depp some critical attention.

Maiwenn will also star in the period piece as Jeanne du Barry, a countess who was Louis XV’s last mistress in a string of debauched personal proclivities that sullied the King’s reputation.

Variety reports that it seems likely the film will be shot in French, like Maiwenn’s previous directorial efforts, which is workable for Depp as he lived in France for many years with Vanessa Paradis, and so has a familiarity with the language, if still a predominant American accent. Nevertheless, this could mean the movie might mainly play domestically on the art house circuit.

Whatever happens, filming will take place for three months on location around Paris, mainly at the Versailles Palace, which will offer authenticity for the film.

Lights, camera, action! Get the latest updates on movies and television from The Reel Buzz on Audacy.

There’s no shortage of new content to look forward to if you’re a Yellowstone fan. With season 5 set to premiere in November and a fresh prequel, 1932, in the works Gil Birmingham (Chief Rainwater) is discussing even more possibilities
TV SERIES・13 HOURS AGO
Audacy

Actress Winona Ryder, once an up and coming teenage star herself, says she thinks one of her young ‘Stranger Things’ co-stars is ‘going to be like Meryl Streep.’ Find out who it is on Audacy.
CELEBRITIES・11 HOURS AGO
HollywoodLife

Finally! Katie Holmes and Bobby Wooten III are red carpet official. The adorable couple, who were seen kissing passionately in New York earlier in May, showed up at the Moth Ball’s 25th Anniversary Gala on Thursday. The event was held at Spring Studios in NYC, and Katie, 43, and Bobby, 33, posed happily on the red carpet for photographers during their sweet date night, per photos published by Just Jared.
NEW YORK CITY, NY・17 MINUTES AGO

Harry Styles reveals the advice he'd give his younger self: 'Take it easy'

Harry Styles recently joined Audacy’s ‘Acoustic Sunrise’ with Matthew Reid, covering many topics including his new album, ‘Harry’s House,’ what advice he would give to Young Harry, and his admiration for the music legends that came before him.
CELEBRITIES・2 DAYS AGO
Audacy

The official release of ‘ELVIS,’ the long-awaited biopic from filmmaker Baz Luhrmann, is almost here – and we now have a little more to chew on before it drops – specifically the soundtrack’s contributors.
ENTERTAINMENT・2 DAYS AGO
Audacy

Billie Eilish admits her own documentary made her cry: 'It's not fun, right now'

During their chat on The Drew Barrymore Show, Billie Eilish opened up to Drew about how watching her documentary made her cry, how the media’s made her feel less confident over the years, what bothers her about the word “fans,” and more.
MUSIC・13 HOURS AGO
Audacy

The 10 richest guitarists, ranked by net worth

Using data gathered from Celebrity Net Worth, we’ve compiled a list of the 10 richest guitarists in the world. As an added bonus, Audacy has plenty of stations dedicated to these artists. Just hit play and start listening now!
MUSIC・2 DAYS AGO

Andy “Fletch” Fletcher, a co-founding member of the iconic band Depeche Mode has passed away at the age of 60. No cause of death has been given at the time.
MUSIC・8 HOURS AGO
Audacy

By now we all know, Harry Styles released his 3rd solo album, Harry’s House. Naturally, since we’re ALL obsessed, he is the perfect topic for Pop Culture Happy Hour. Listen as Stephen Thompson, Cyrena Touros and Maria Sherman, talk all things Harry.
MUSIC・10 HOURS AGO
Audacy

It's not unusual to still think Tom Jones is cool: The singer on meeting Elvis and more

It’s certainly not at all unusual for there to be massive celebrities joining the mix, but this week on the Broken Record podcast, superstar producer Rick Rubin talks with one of his all-time favorite vocalists, Mr. Tom Jones!
CELEBRITIES・2 DAYS AGO
Variety

Click here to read the full article. Rotem Shamir, whose credits include hit series “Fauda” and “Hostages” will make his Indian film debut as director of “Garud.” Inspired by real events, “Garud” will present a fictionalized depiction of the rescue mission in Afghanistan, based on the story of a police officer and his team of special forces. The film will be produced by Ajay Kapoor (“Attack”) for Ajay Kapoor Productions and Subhash Kale for Vikrant Studio. The cast is being finalized. Kapoor said: ” ‘Garud’ is a huge project for me, I’m emotionally driven to the film and want to give it the...
WORLD・45 MINUTES AGO

Doja Cat is ready to rap on 'Planet Her' follow-up, but 'real fans' already know

To follow up her successful third album Planet Her, Doja Cat intends to finish and release a rap-filled album, before she follows through with her plan “to get the f*** out for a second.”
MUSIC・1 DAY AGO
Audacy

After an amazing return, ABBA is ready to say goodbye

Just days ahead of the launch of their ABBA Voyage concert experience, Björn Ulvaeus told The Sun that ABBA is done making music. The group released their album ‘Voyage’ back in November, their first in 40 years.
MUSIC・1 DAY AGO
Audacy