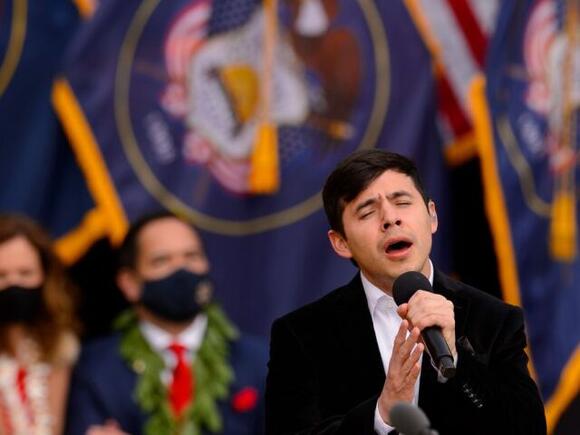 David Archuleta is in agony but ready to live a more authentic life as a gay man.

Torn between his same-sex attractions and his faith’s teachings about them, one of Mormonism’s most celebrated pop musicians says if he doesn’t share his feelings, he will burst.

The 31-year-old Utahn needs to “let out some of the steam inside of me that’s building up,” Archuleta says in a recent raw and emotion-filled 51-minute stream of consciousness Instagram post , which has been viewed more than 300,000 times, with tens of thousands of “likes” and thousands of comments.

The “American Idol” runner-up and devout Latter-day Saint — who did not respond to requests for comment or an interview for this story — says he has had trouble preparing to go on tour this year, blocked by roiling inner battles.

It’s a long way from his celebrated Christmas stint as a guest soloist with The Tabernacle Choir at Temple Square.

“I can no longer…pretend like everything’s fine,” he says in the video.

READ THE ENTIRE STORY IN THE SALT LAKE TRIBUNE

This article is published through the Utah News Collaborative, a partnership of news organizations in Utah that aim to inform readers across the state.

Robin Roberts got emotional as she opened up about her relationship with partner Amber Laign, especially in the midst of a challenging health battle. The Good Morning America star made an appearance on The Ellen DeGeneres Show to promote her new book, Brighter By the Day. VIDEO: Robin Roberts enjoys...
CELEBRITIES・26 DAYS AGO
The Independent

A wedding caterer has been praised for turning down all events where the bride and groom are asking their guests to pay for their own meals.In a recent post shared on the discussion-based site Mumsnet, a user explained that they run a “wedding catering company” that is “based on a food truck” and works for “less formal weddings”.They then revealed that some couples who have reached out to them about catering have been expecting their guests to purchase their own dinners at their weddings, a concept that the caterer said they have been “turning down” because they believe it is...
RELATIONSHIP ADVICE・26 DAYS AGO
People

90 Day Fiancé stars Anna-Marie Campisi and Mursel Mistanoglu have added a little boy to their family! The couple, who tied the knot on Season 7 of the TLC reality show, announced on Instagram this week that their son, Gokhan John, had been born via a surrogate on Monday, April 11 after the couple's initial struggle with fertility.
FAMILY RELATIONSHIPS・25 DAYS AGO

"Their house their rules. Don't like it? Move out and let your brother & his family live in peace," one commenter wrote.
FAMILY RELATIONSHIPS・25 DAYS AGO
Newsweek

Fellow parents and teachers were disturbed by the man's behavior and praised the mom for stepping in to protect her daughter.
FAMILY RELATIONSHIPS・25 DAYS AGO
hotnewhiphop.com

Helen Skelton has revealed that she has separated from her husband, rugby player Richie Myler.The Countryfile host announced the news in an Instagram statement, writing that Myler has “left the family home”.Skelton’s announcement comes just four months after they welcomed their third child.“Very sad to say that Richie and I are no longer a couple,” she wrote. “He has left the family home. We will be doing our best to co parent our small children.”Skelton, who married Myler in 2013, accompanied the post with two broken heart emojis.The pair have three childen together: Ernie, aged six, Louis, aged...
CELEBRITIES・25 DAYS AGO

Community pitches in to help send Ogden teen to prom

A senior at Ogden High was worried about prom, and the community made sure she showed up feeling her very best.
OGDEN, UT・6 DAYS AGO