Roundly praised: Any way you slice it, National Pie Day is worth celebrating 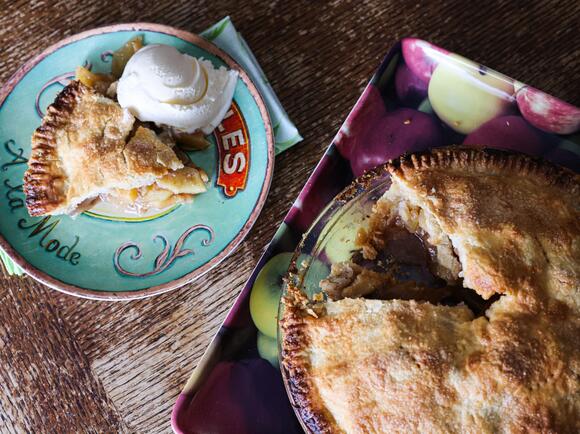 Of course, you could also enjoy savory options and still do your due diligence for the occasion.

To clear up any confusion: This is not Pi Day, which falls on March 14 – or 3.14 – and celebrates the infinite number pi with pie because the words are homophones and math is used in baking the desserts.

Here on the Food pages, we honor both dates. And that’s because we don’t even need an excuse to eat pie, but we’re happy to join in the festivities any time pie is offered.

“I confused it with National Pi Day,” admitted 87-year-old Emmie Jakes of Sylvania, a renowned local pie maker, until she learned that there are two different pie parties.

A teacher for 36 years before retiring 10 years ago to care for her mother (who passed away in 2016 at the age of 102), Mrs. Jakes spent the last 15 years of her career as the librarian at Woodward High School , a job she enthusiastically said she loved. With its “excellent” math and science departments, she said, they would always celebrate Pi Day.

Mrs. Jakes would bake about a dozen pies for the event, she said, and sell slices for 50 cents apiece. It was a “great way to make money for the library,” she remembered.

Now that she’s aware of National Pie Day, as well, Mrs. Jakes has shared her cherished family recipe for apple pie and some pie pointers to help our readers enjoy the day.

She first learned to bake pies while living with her maternal grandmother, Gertrude Bixby, on an upstate New York fruit and dairy farm from the 1930s through ‘50s after her father became ill and her mother necessarily went back to school for further job training.

Her grandma “was the ultimate pie maker and always made her fruit pies in season,” Mrs. Jakes fondly recalled.

Their home had two wood stoves, “which allowed (Mrs. Bixby) to make numerous pies each week,” her granddaughter continued. “The need for a hot oven for pies provided me with the job of bringing her kindling to raise the temperature.” She remembered her grandmother’s technique for testing the heat: “She would know if it was hot by putting her arm in the oven.”

Although the pie-baking equipment has been updated over the decades, “my recipe for her pie dough has not changed” since the 1950s, Mrs. Jakes said emphatically – for more than six decades.

Her grandmother’s “original dough required lard,” she noted, “but when Crisco [shortening] came to the market she made the change. Since lard actually had flavor, she compensated by adding extra salt.”

Contrary to popular practice and most recipes, “I do not chill the Crisco,” Mrs. Jakes said. “I never did,” nor does she chill the discs of prepared dough before rolling them out and assembling a pie. She does, however, “use cold or ice water” when making her dough.

As for the filling, “you want a firm apple,” and her grandmother “never made a pie with only one kind,” she pointed out. Her own preference is for McIntoshes and Jonathans. “Macs do mush more,” she noted, “but the two flavors blend well.”

Mrs. Jakes is “our local pie expert,” said Andi Erbskorn, executive director of the nonprofit history and education center Heritage Sylvania . So she has invited Mrs. Jakes to serve on a team of judges at four of the organization’s five pie competitions held in conjunction with the annual Sylvania Fall Festival.

She tends to stick with tried-’n’-true classics, Mrs. Jakes admitted. So after judging as many as 40 entries at a time in the festival contests, she “now realize[s] what a large variety of great pie recipes are out there. There were so many unique recipes,” she said with admiration.

“It’s probably one of the hardest things I’ve ever done,” judging that competition, she said with great respect for the bakers. “It was really, really, really hard.”

She remembered that some of the pies “were beautiful, but when you went to eat it...” She groaned rather than saying anything unkind about anyone’s labor of love and proudly-made entry. Others might be “falling apart” when served, or the fillings might not have set properly (soupy or rubbery). “Those were easy” to assess, Mrs. Jakes said.

In her role, she said she was primarily “ looking for the crust, for the flakiness,” while noting that other judges were all about “the flavor — ‘I like this pie ‘cause it tastes good,’” without, perhaps, discerning some of the nuances.

But the judges never discussed their opinions or tried to sway each other, Mrs. Jakes proclaimed. “We did it separately,” sampling and filling out score sheets. Then her husband Jerry “used to do the tallying,” she said, as the tasters continued to work their way through the dozens of pies.

Mrs. Jakes’ legendary skills are so revered not just in the community but, especially, in her family that when her grandchildren – “who have loved these pies all these years,” she said – commissioned a portrait of her from local painter Dani Fuller , “they had her do a picture of me holding my pie.” It’s a “magic picture,” she said with love, that “looks just like me” and is a tribute to “all my pie making.”

For the family’s recent Christmas celebration, Mrs. Jakes baked four pies: banana cream, pumpkin, and two chocolate cream (which is her oldest daughter’s favorite). For that last one, she has long used a convenience product: cook-and-serve chocolate pudding. But she discovered awhile ago that the addition of just a bit of dark chocolate “enriches the pie,” giving it more depth to “jazz” it up.

Everyone “loves it when we have black raspberries,” she said, raving about the summer bounty while thinking of still more family favorites. She had berry bushes at her former house, which one granddaughter and her husband have purchased so it’s still in the family and the fruits are accessible for Mrs. Jakes to pick herself.

“Those make the most wonderful pies,” she enthused, as do “cherries in mid-July” which she used to pick and pit (but now delegates those chores to others, she said with a laugh). But, like her grandmother before her, “I usually only make pies when the fruit is in season.”

Apple pie, however, is the exception, since the fruits are accessible year-round and are good keepers. So a pie made with them can be baked and enjoyed at any time – especially now that you’ll have a recipe handed down from one expert to another.

“ Most of the expertise she taught me is in how to handle the dough,” Mrs. Jakes said of her grandmother, though what “seems natural to me has not been easy to pass on,” she explained. “The hardest part is how the dough is supposed to feel,” which changes through the seasons depending on many conditions, such as weather.

“My two daughters, they just love eating” the pies, “and I’m more than willing to do it for them,” Mrs. Jakes said. She’s baked with her children “and then they’ve made their own, and they get the feel for the dough and how you handle it.” Two of her grandchildren, who are in their 30s, are also learning from their grandmother to carry on the family’s pie baking tradition.

“A lot of it, with me,” Mrs. Jakes said, “is just the wonderful memories.”

Now, thanks to her family recipe and tips, you’re all set to make memories of your own.

And any way you slice it, it’ll be as easy as pie to celebrate National Pie Day.

Renowned local pie baker Emmie Jakes said that her maternal grandmother, Gertrude Bixby, who taught her to bake pies during the Great Depression, “would have been very proud” to share her tried-’n’-true recipe with Blade readers.

Combine flour and salt. Cut in Crisco with a pastry blender until pieces are the size of small peas. Sprinkle water, 1 Tbsp. at a time, over the mixture and blend in with a fork. Divide the dough into two balls. Flatten slightly and roll on a floured pastry cloth. For best results use cloth cover on the rolling pin.

10 tart pie apples, peeled and sliced (I prefer to use ½ McIntosh and ½ Jonathan, Emmie writes. Transparents are good for summer pies.)

¼ fresh lemon (sprinkle over the apples)

Combine sugar, salt, flour, cinnamon & nutmeg. Add this mixture to the apples and place apples in a pastry lined pie plate. Dot the top with margarine or butter. Cover with top pastry and seal edges. Make slices on top to vent. Sprinkle top with a little sugar.

Bake at 400 degrees for approximately 1 hour.

Click here to read the full article. Khloé Kardashian’s perfectly curated kitchen pantry (read: grocery store) is a slice of organized, structured Heaven that puts even the best kitchen storage solutions to shame. And if you’ve ever caught a glimpse of her color-coordinated fridge (and her urge to keep everything super neat and tidy inside it), the immaculate state of her pantry really should come as no surprise. Luckily for us, we can recreate some of the organizational magic with Aldi’s new glass storage containers. View this post on Instagram A post shared by Aldi Connoisseur 🌈 (@aldi.is.my.jam) Aldi fan account,...
CELEBRITIES・23 DAYS AGO
Newsweek

"This is very concerning," wrote one commenter. "It's so much bigger than mac and cheese."
INTERNET・23 DAYS AGO