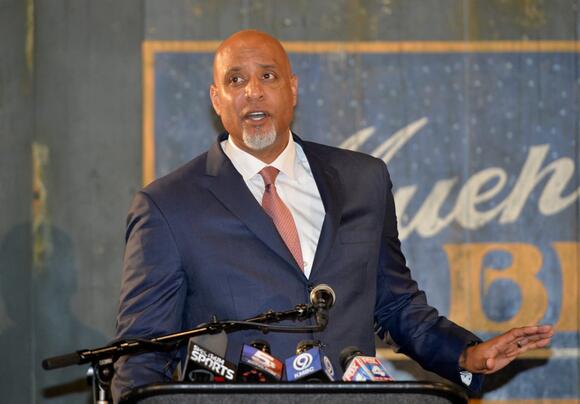 The MLB and MLBPA are set to meet on Monday to continue CBA negotiations.

The MLB lockout is now in its seventh full week. Last Thursday, the league and the MLBPA met so the league could present "core-economic" proposals to the players' association. The MLBPA was unimpressed by MLB's proposal . According to Evan Drellich of The Athletic, the players will submit their counter offer when the two sides meet this Monday.

MLB's recommended changes, according to Jeff Passan of ESPN, involved altering the arbitration procedure for players with at least two years of service time, modifying the draft lottery system, and awarding draft picks to clubs that have a top-100 prospect on their Opening Day roster.

For the MLBPA, those topics are not as critical for the new CBA. The players' association is concentrating their efforts on raising the competitive balance tax threshold and increasing compensation for younger players.

According to several experts, the present state of talks does not suggest that players will report to spring training on time in February. Pitchers and catchers typically report for spring training around Valentine's Day.

The ongoing labor dispute is the result of the MLBPA's distrust of the league owners and their champion, commissioner Rob Manfred.

Many insiders had an inkling that baseball was headed towards a lockout after the contentious discussion surrounding the modified 60-game season in 2020. Even as a deadly epidemic ravaged humanity, the two sides were unable to settle on terms for a reduced season in a timely fashion.

Those debates only fueled players' animosity toward MLB ownership and Manfred, according to experts.

Even if the counter offer from the MLBPA doesn't lead to a new CBA in the near future, it may be one step closer to resuming play in 2022.

Michael Grove might get the call over the next couple of days.
LOS ANGELES, CA・2 DAYS AGO
Inside The Dodgers

The Dodgers are calling upon righty Michael Grove to help the exhausted Dodgers bullpen.
PHILADELPHIA, PA・1 DAY AGO
Inside The Dodgers

Joe Davis walked back a comment he made about Max Muncy during Friday night's broadcast.
LOS ANGELES, CA・1 DAY AGO
Inside The Dodgers

The Dodgers made a pair of roster changes prior to first pitch against the Diamondbacks on Monday.
LOS ANGELES, CA・8 HOURS AGO

Person
Rob Manfred
Inside The Dodgers

The 22-year MLB veteran made his pitching debut on Sunday night.
LOS ANGELES, CA・15 HOURS AGO
Inside The Dodgers

Dodgers: Gavin Lux Reveals He Was Unaware it was the Ninth Inning On Base Paths

Dodgers second baseman Lux got a little lost in the moment after his walk-off double on Sunday.
LOS ANGELES, CA・13 HOURS AGO
Inside The Dodgers

Justin Turner tied up the game last night with a towering blast to left field against the Phillies.
LOS ANGELES, CA・2 DAYS AGO
Inside The Dodgers

The Dodgers manager gave some brief updates on Clayton Kershaw and Andrew Heaney on Sunday.
LOS ANGELES, CA・19 HOURS AGO

Russell Martin is getting into the alcohol game.
LOS ANGELES, CA・11 HOURS AGO