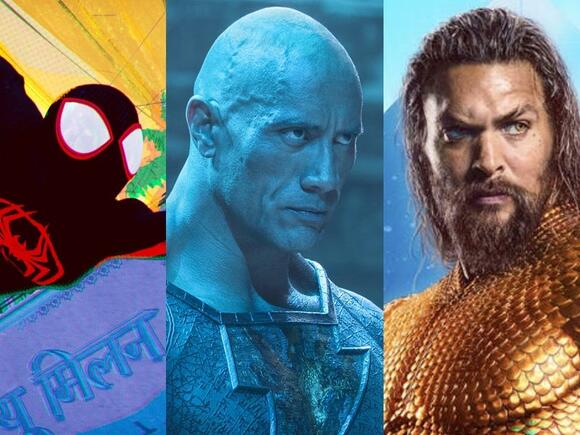 Robert Pattinson plays a younger version of the Dark Knight during his second year as the masked vigilante as he goes up against the Riddler (Paul Dano) and the Penguin (Colin Farrell).

Directed by Matt Reeves, "The Batman" is set to be the longest live-action Batman movie to date at nearly three hours . You can watch the latest trailer here .

Afflicted with a rare blood disorder, Morbius searches for a cure and, in the process, winds up turning himself into a vampire. Whoops.

Matt Smith and Tyrese Gibson will also star. Michael Keaton will reprise his "Spider-Man: Homecoming" role as the Vulture here, making some fans wonder if we'll see some version of the web-slinger appear on screen.

You can watch a trailer here .

"Doctor Strange in the Multiverse of Madness" — May 6

Marvel's next big movie will kick off the summer.

Six years after the first film, the "Doctor Strange" sequel will reunite Stephen Strange (Benedict Cumberbatch) and the new Sorcerer Supreme Wong (Benedict Wong) with Christine Palmer (Rachel McAdams) and Baron Mordo (Chiwetel Ejiofor) as they face off against a more evil-looking version of Strange who may threaten to destroy the universe.

We're expecting some other possible surprises since it looks like they're breaking the multiverse even more in this one.

When his best bud Superman (John Krasinski) and the Justice League are kidnapped, Krypto rallies together a group of pets, including Ace the Bat hound (Kevin Hart), to save the superheroes.

"Thor: Love and Thunder" will feature the return of Chris Hemsworth as the God of Thunder and Tessa Thompson as Valkyrie. "Thor: Ragnarok" director Taika Waititi also returns to direct.

The big surprise is that Natalie Portman will be back playing a female Thor straight out of the comics . Portman appeared on stage at San Diego Comic Con 2019 wielding the hammer when the movie's title was announced.

Dwayne Johnson is in two DC films this year. This antihero movie, following the Shazam nemesis, has been in development for over a decade.

Born 5,000 years ago, Teth-Adam (Johnson) was given super-powered abilities by Egyptian gods, making him one of the most powerful DC characters, Mighty Adam. When he abused his powers, the gods imprisoned him and he became known as Black Adam. The movie follows the character as he breaks free from his tomb.

You can read more on the character here .

"Spider-Man: Across the Spider-Verse (Part One)" — October 7

Miles Morales (aka Spider-Man) is back in the sequel to the Oscar-winning animated movie.

In the first film, Spider-Men from alternate universes were transported to his Earth and helped him take down Kingpin. Here, Miles (Shameik Moore) will transport across the multiverse to teamup with Gwen Stacy (Hailee Steinfeld) and other Spider-People to face off with a new mysterious villain who is "more powerful than anything they have ever encountered."

Oscar Isaac, who briefly voiced another version of Spidey in the first film, will also return in this film.

In the works for years, the film follows the popular "Flashpoint" story where Allen/The Flash goes back in time to prevent the death of his mother. Unfortunately, that causes a ripple effect, leading to a very different future for Allen and other members of the Justice League.

The film also stars Michael Shannon (who previously played General Zod in "Man of Steel"), Kiersey Clemons, and Michael Keaton. The latter is reprising his role as Batman/Bruce Wayne.

Feige confirmed at 2019's San Diego Comic-Con that "Black Panther: Wakanda Forever" is underway. Out of respect for the late Chadwick Boseman, who died in 2020 after a secret battle with cancer, Marvel won't recast the role of T'Challa .

"To honor the legacy that Chad helped us build through his portrayal of the King of Wakanda, we will continue to explore the world of Wakanda and all of the rich and varied characters introduced in the first film," Feige said.

"Aquaman and the Lost Kingdom" — December 16

Jason Momoa returns as Arthur Curry in a sequel the actor pitched to Warner Bros .

The story will follow Aquaman as he makes "an uneasy alliance" to protect Atlantis and the rest of the world from "irreversible devastation."

"After we finished the first one I went into [Warner Bros.] with my writing partner, I had dreamed up the second one, and we went in and we pitched the idea," Momoa said on "The Drew Barrymore show.

J.K. Simmons and Brendan Fraser will also star while Michael Keaton will reprise his role as an older Bruce Wayne.

Don't care for these movies. No good writing and stories being told. The movies really lack a lot these days.It nice when you find one though. Blue screens and computer simulation can be good but it went to far.

really not looking forward to black adam not because of the movie mostly because if you seen a couple rock movies you seen them all he never had interest in being a character actor because hes only every played the rock character...he even in fight scenes does wrestling moves its like come on...sure hes a high paid movie star but you gotta look at whos paying for the tickets teenagers or mothers taking there kids its not that hes a huge mega star its he caters to a young audience that wants to see the rock not the acting

Once again, Disney (DIS) - Get Walt Disney Company Report is finding itself embroiled in a political quagmire owing to its support of the LGBTQ community, after Florida Gov. Ron DeSantis punished Disney for denouncing his “Don’t Say Gay Bill,” by seeking to revoke Disney World’s designation as a special tax district (which as we pointed out, is ultimately a meaningless gesture).
FLORIDA STATE・28 DAYS AGO
Newsweek

While Pratt has never publicly expressed his views on sexuality, his links to a church that has been accused of supporting conversion therapy and being anti-LGBTQ have made him a target for online criticism.
MOVIES・29 DAYS AGO
Collider

One of the most intriguing films coming out in 2023 is Warner Brothers’ Barbie starring Margot Robbie, directed by Greta Gerwig. There has been so much casting news over the last couple of months, but now we have our first official picture of Robbie in costume and a confirmed release date. Barbie will be released on July 21, 2023.
MOVIES・28 DAYS AGO
Insider

'Top Gun: Maverick' director reveals how he convinced Tom Cruise to make a sequel to one of his most beloved movies

Joseph Kosinski explained to Insider how he got Cruise to make a sequel to "Top Gun" 35 years after the original hit theaters.
MOVIES・4 HOURS AGO

Laughter erupted in courtroom after Johnny Depp said he doesn’t watch his own movies and couldn’t recall the question he was asked. “I don’t watch them. I feel better not watching them. What was the question again?” Mr Depp said to laughter from the room. Johnny Depp trial – latest updates“Order in the court, or I will have you removed,” Judge Azcarate said. “Understood? Thank you.”The defamation trial between Mr Depp and Amber Heard began on Monday 11 April in Fairfax, Virginia following Mr Depp’s lawsuit against his ex-wife in March 2019. Mr Depp is arguing that she defamed him...
CELEBRITIES・29 DAYS AGO
Insider

Depp said he discovered Disney would not recast him in "Pirates" days after Amber Heard's Washington Post op-ed article was published.
FAIRFAX, VA・29 DAYS AGO
Popculture

Smith spoke about his experience with ayahuasca in season four of Netflix's "My Next Guest Needs No Introduction With David Letterman."
CELEBRITIES・1 DAY AGO
Insider

Kristen Stewart says she left the set of 'Crimes of the Future' with no idea what she was shooting, but loved the gory scenes

The "King Richard" star spoke about his music career in a new episode of Netflix's "My Next Guest Needs No Introduction With David Letterman."
CELEBRITIES・1 DAY AGO
Outsider.com

Geroge Wendt, who played Norm on the classic TV show Cheers, decided to be like Jack when he was in public. We mean Jack Nicholson here. The famed movie actor seemingly did not mind being noticed when out among the non-Hollywood crowd. Nicholson’s attitude about this did ring a bell for Wendt during his show’s incredible run on NBC and in reruns today.
CELEBRITIES・28 DAYS AGO

Neill said it didn't occur to him how big the age gap was until he saw he was listed in a magazine article titled "Old Geezers and Gals."
MOVIES・2 DAYS AGO
Insider

Sandra Oh hailed her fellow Asian Canadian actor and 'Shang-Chi' star Simu Liu as 'our superhero': 'He's been on a path that no Chinese Canadian has walked before'

During a roundtable for "Obi-Wan Kenobi," the pair said they wanted to "thank fans" for their passion after the prequels were panned by critics.
MOVIES・13 HOURS AGO
Insider

The Malaysian actress has captivated audiences with her performances in films such as "Crouching Tiger, Hidden Dragon" and "Crazy Rich Asians."
CELEBRITIES・1 DAY AGO