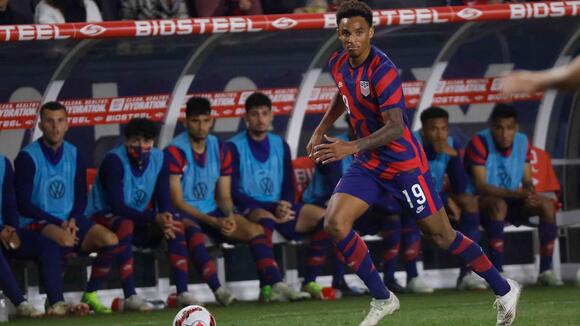 Bryan Reynolds has struggled for playing time at Roma but will hope to remedy that in Belgium for the second half of the season.

A chance at salvation has arrived for Bryan Reynolds in the form of a loan to Belgium's Kortrijk.

The young U.S. men's national team right back, who has been out of José Mourinho's favor at Roma, has secured a move for the rest of the season that should offer a greater chance at the playing time that has been so hard to come by in Italy.

The aim for Reynolds, 20, is for the loan to rocket him back onto the U.S. men's national team radar for the end of World Cup qualifying and, as long as qualifying goes as planned, next fall's competition in Qatar.

It appeared that Reynolds was lined up to go to Anderlecht, where he would have played under former Belgium and Manchester City legend Vincent Kompany (Anderlecht was a loan destination for another U.S. defender last season, with Matt Miazga spending the season away from Chelsea there. Previously, U.S. internationals Sacha Kljestan and Kenny Saief plied their trade in Brussels).

But instead, the 20-year-old FC Dallas product heads elsewhere in the Belgian top flight, looking to rediscover the form that convinced Roma to spend over $8 million to sign him last year . Kortrijk has not traditionally been a home for U.S. players, though D.C. United defender Brendan Hines-Ike spent nearly three seasons there before coming to MLS last year. Erik Palmer-Brown also spent the second half of the 2017-18 season there on loan from Man City.

Reynolds, who has played just one Serie A minute this season, was released to join the U.S. national team ahead of its friendly vs. Bosnia-Herzegovina last month despite the camp and match taking place outside of the FIFA international calendar. Reynolds came off the bench to play 28 minutes, and coach Gregg Berhalter was quite direct in his assessment of the player.

“You can surely see the rust today, and that's something that he can't help that,” Berhalter said following the Dec. 18 match. “He's doing his best in training and he's doing his best to get on the field and it's been difficult for him. You can see he lacks rhythm. He's a player that we believe in as a staff. We think he's a top talent and he has really high potential. But he needs to be playing regularly. He needs to get rhythm if he's going to help us in qualifying.”

Before he can get on the field in qualifying, Reynolds must first get on the field at his new club—the concurrent arrival of Nayel Mehssatou, another young right back, from Anderlecht could complicate matters—which is in a mid-table logjam. Kortrijk currently sits eighth in the 18-team division, but just three points behind fifth-place Gent, with a game in hand. Reynolds joins other U.S. fullbacks in the league, with left back Sam Vines at Antwerp and right back Kyle Duncan at Oostende. Another U.S. defender, center back Mark McKenzie, is at Genk.

Reynolds is yet another U.S. international to make a winter move. Ricardo Pepi left FC Dallas for Augsburg in the Bundesliga for a reported $20 million fee, while Daryl Dike completed a permanent transfer to West Brom in England's second tier from Orlando City on a reported $9.5 million deal. Three young prospects left MLS on 18-month loans, with James Sands , 21, signing with Scottish champion Rangers after winning MLS Cup with NYCFC ; Cole Bassett , 20, joining Feyenoord in the Netherlands after a couple of breakout seasons with the Colorado Rapids; and Justin Che , 18, leaving FC Dallas for Hoffenheim.

Another major move could be in the works as well, with Arsenal reportedly making a play to sign U.S. goalkeeper Matt Turner from the New England Revolution.

It is not currently known why there were logistical issues getting fans into the Stade de France.
UEFA・17 MINUTES AGO
The Guardian

Minute-by-minute report: Kick-off is delayed until at least 8.30pm BST with many fans still stuck outside the ground. Join Rob Smyth for updates
UEFA・22 MINUTES AGO
Sports Illustrated

Zlatan Ibrahimović Says He Played Without an ACL for Six Months

Milan clinched its first Serie A title since 2011 on Sunday and he took to Instagram to share how difficult the last six months have been for him.
PREMIER LEAGUE・2 DAYS AGO
Sports Illustrated

Carlos Alcaraz Survives Early Test at French Open, but How Far Will His Game Take Him?

In this week’s mailbag, Jon Wertheim breaks down the games of Carlos Alcaraz and Seb Korda, and answers your questions around Wimbledon’s ban of Russian players.
TENNIS・2 DAYS AGO

SI:AM | The European Soccer Season Has a Fitting Finale

Two brand-name clubs will face off in the UEFA men’s Champions League Final on Saturday.
UEFA・1 DAY AGO
Sports Illustrated

How the Champions League Final Will Be Won

It’s Liverpool’s press and ability to control against Real Madrid’s penchant for capitalizing on chaos and brilliant moments. So which one will prove superior in Paris?
UEFA・1 DAY AGO
Sports Illustrated

The rising Mercedes star is the only Formula One driver to finish in the top five of every race so far this season.
MOTORSPORTS・1 DAY AGO

For the second time in the last three races, Ferrari will start both cars on the front row after a frenzied finish to Saturday’s qualifying session.
MOTORSPORTS・3 HOURS AGO
Sports Illustrated

The Ferrari star has yet to finish a F1 race on his home track.
MOTORSPORTS・7 HOURS AGO