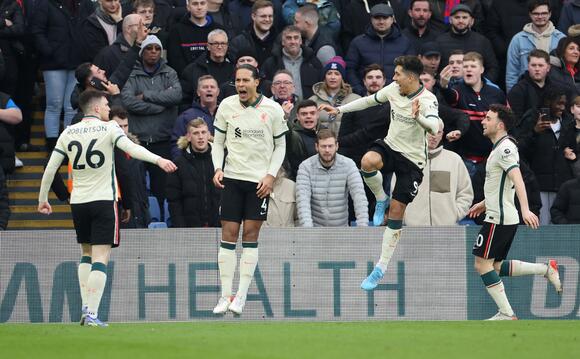 Liverpool head to Crystal Palace on Sunday afternoon, hoping for a third win in a week to start to put pressure back on Manchester City at the top of the Premier League . Victory for the Reds would leave them nine points adrift of the reigning champions with a game in hand, following their draw with Southampton on Saturday. Jurgen Klopp ’s team have rediscovered form of late after a slight stutter, beating Brentford last weekend before dispatching Arsenal in midweek to reach the Carabao Cup final.

For Palace, this has undoubtedly been a season of progress and putting into place building blocks for an exciting-looking future, after a summer squad overhaul and the appointment of Patrick Vieira as manager. They sit 13th in the table, with just one win from the last five following a draw at Brighton last time out .

Victory would push the Eagles back into the top half, though the scale of their task is underlined by the fact the Reds have emerged triumphant in all of the last nine competitive meetings between these two teams, including a 3-0 win at Anfield in September and a 7-0 thrashing at Selhurst Park last term . Follow all the team news and match action as Crystal Palace host Liverpool below:

Frank Lampard has insisted Everton are not a dirty team, despite the club getting the most red cards in the Premier League during his reign.Everton have had five players sent off since Lampard’s appointment in January and were reduced to nine men in Sunday’s 3-2 defeat by Brentford when Jarrad Branthwaite and Salomon Rondon got their marching orders.Jonjoe Kenny, Allan and Michael Keane have also seen red in recent weeks but while Lampard accepted Rondon was guilty of a poor tackle, he attributed the others to “footballing mistakes.”Their relegation rivals Leeds have had Luke Ayling and Dan James given straight...
PREMIER LEAGUE・3 HOURS AGO
The Independent

The Football Association is investigating video footage which appears to show Sheffield United’s Oli McBurnie stamping on a Nottingham Forest fan.The incident occurred when fans invaded the pitch at the City Ground after Forest had beaten the Blades on penalties in the second leg of Tuesday night’s Championship play-off semi-final.A video circulating on social media shows McBurnie, sidelined through injury, tangling with a supporter who had fallen to the ground.Forest fans had poured on to the pitch in celebration after their side’s penalty shootout win secured their place in the play-off final at Wembley.The FA confirmed to the PA news...
PREMIER LEAGUE・2 HOURS AGO
The Independent

Eddie Howe has revealed one of the hardest parts of being Newcastle manager is having to say goodbye to his children.The 44-year-old father of three has spent the last seven months combining his parental duties with the task of keeping the Magpies in the Premier League with the latter objective having been accomplished handsomely and to popular acclaim.Howe, who replaced Steve Bruce at the St James’ Park helm in November last year, has commuted between the north-east and his home in Dorset, where his wife Vicki and their three sons, aged 10, seven and three, have remained amid the search...
PREMIER LEAGUE・3 HOURS AGO
The Independent

Rangers suffered penalty shootout heartache in Seville as Eintracht Frankfurt came from behind to win the Europa League.Joe Aribo put the Rangers fans in dreamland when he slotted home following a slip in the German side’s defence in the 57th minute.Frankfurt levelled 12 minutes later when Rafael Borre knocked the ball home from close range following a low cross.Gers finished extra-time strongly and Ryan Kent was denied at close range before Steven Davis had a shot cleared off the line, while James Tavernier had a free-kick saved in stoppage-time of the 1-1 draw.Aaron Ramsey, a 117th-minute substitute, saw his spot-kick saved and Borre netted to seal a 5-4 shootout win. Read More Live updates: PM ‘dithering’ on windfall tax, says StarmerBrexit has increased risk of danger foods reaching UK, watchdog warns
SPORTS・3 HOURS AGO

For weeks, Seville had been the destination for Rangers’ European journey and it was here at the Ramon Sanchez Pizjuan where it came to a sudden and crushing end. Joe Aribo’s second-half finish had put Rangers within touching distance of a first European trophy in 50 years, but Eintracht Frankfurt equalised, took it to penalties and it was there where this once-in-a-generation final went in the way of the German side.Ryan Kent had the chance to win it in the dying seconds of extra time, the opportunity to claim the Europa League there for the taking. He was denied by...
SOCCER・2 HOURS AGO