Tiffany Is Collaborating With Pharrell Williams 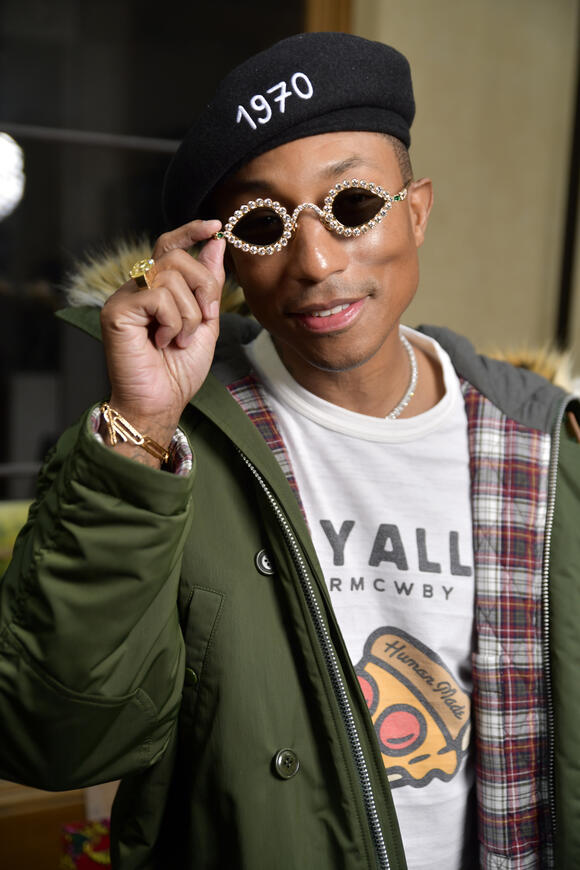 Pharrell Williams strode into Kenzo ’s fall 2022 show in Paris on Sunday wearing almond-shaped sunglasses rimmed in diamonds and with an emerald studding each temple, teasing a new design project with Tiffany & Co.

“Tiffany and I are engaged,” he told WWD, flashing a big smile.

He said the sunglasses were the “first of many things that I’m gonna do with Tiffany.”

Asked about the collaboration, he retorted: “No, it’s different. It’s a partnership.…It’s about seeing things differently.”

Pressed for more details about the glasses, and the partnership, Williams demurred: “I can’t give it all away now. I don’t want to go too much into detail, OK, because we’re here today to celebrate my brother Nigo.”

He was referring to the Japanese streetwear guru who was making his debut as the new creative director of Kenzo . The show attracted the likes of Ye, formerly known as Kanye West, Julia Fox, Pusha T, Tyler the Creator and Shygirl to a chilly, covered passage near the Place des Victoires.

Williams is no stranger to jewelry design, having collaborated with Louis Vuitton in 2008 on a fine jewelry collection that was based on coats of arms. A Chanel ambassador, the music star also often wears that brand’s necklaces.

Tiffany & Co., now owned by LVMH Moët Hennessy Louis Vuitton, has been shaking up its image with surprising collaborations, like a recent one with skater brand Supreme that included a pearl necklace and a pocket knife shaped like a key.

The tie-up with Williams, believed to be coming out some time next year, is the latest surprising move as LVMH shakes up the storied American company with a fleet of buzzy brand ambassadors — including Beyoncé and Jay-Z, Blackpink singer and recent solo artist Rosé, and actresses Tracee Ellis Ross and Anya Taylor-Joy — and high-impact advertising.

Fashion brands are taking notice of Gray, who counts 9.9 million fans on TikTok, 5.1 million followers on…. Cannes Film Festival: Lea Seydoux on ‘Crimes,’ Compulsion and Working With Nicolas Ghesquière. Fashion is "trying to create beauty out of emptiness, out of potential," reflects the actress. By.
DESIGNERS & COLLECTIONS・1 DAY AGO
WWD

Click here to read the full article. CRYPTO CRAZE: Was it because its show was at the New York Stock Exchange, or just customers wanting to pay with it? Regardless of the reason, Balenciaga revealed that it now is accepting payment in cryptocurrency. Given the plunge in their value over the last 10 days, one could argue the timing wasn’t ideal, but starting with the U.S., the brand will now accept crypto at its flagship stores, including on Madison Avenue in New York and Rodeo Drive in Beverly Hills, as well as on balenciaga.com. Other regions and e-commerce will follow,...
DESIGNERS & COLLECTIONS・2 DAYS AGO
WWD

Click here to read the full article. ALL YOU NEED IS LOVE: Yves Saint Laurent’s longstanding relationship with Morocco will be the subject of an exhibition opening in Portugal next month. The late couturier first visited Marrakech in 1966 and bought a house there, subsequently sketching many of his collections there. “The city opened my eyes to color,” he once said. The “Love” exhibition at the Palace of the Dukes of Cadaval in Évora, running from June 5 to Oct. 31, will be divided into three chapters.More from WWDBalenciaga Resort 2023Cannes Film Festival: Lea Seydoux, Alicia Vikander Glow at Louis VuittonEmma...
DESIGNERS & COLLECTIONS・1 DAY AGO
WWD

Click here to read the full article. Austin Butler is the newest celebrity to sign on as a Cartier ambassador. The fine jeweler said on Wednesday that it has tapped the “Elvis” actor for the ambassadorship. Butler kicked off the appointment at the 2022 Cannes Film Festival, walking the red carpet for the “Elvis” premiere wearing pieces from Cartier.More from WWDInside at Dior's Cannes FeteCannes Film Festival: Lea Seydoux, Alicia Vikander Glow at Louis VuittonPhotos From the 2022 Cannes Film Festival Red Carpet “We are delighted to welcome Austin into the maison as an ambassador for North America,” said Arnaud Carrez, Cartier’s...
BEAUTY & FASHION・6 HOURS AGO
Hello Magazine

Kate Hudson has realized one of her dreams and has taken to Instagram to share the incredible news with her 15 million followers. Sharing two pictures of her looking casual in a pair of baggy dip-dyed trousers and a white tank top, and singing into a microphone, the actress announced a surprising career change.
CELEBRITIES・29 DAYS AGO
Hello Magazine

Gwyneth Paltrow is a doting mom to two teenage children, Apple and Moses, who she shares with ex-husband Chris Martin. The family are notoriously private, but over the weekend the award-winning actress gave a rare insight into their upcoming plans - and how they are changing things up this year for Mother's Day.
FAMILY RELATIONSHIPS・29 DAYS AGO
People

Paulina Gretzky walked down the aisle in Vera Wang!. The bride shimmered during her wedding with pro golfer Dustin Johnson on Saturday at Tennessee's Blackberry Farm. Gretzky showed off the stunning look on Instagram Monday in a photo of the newlyweds kissing. "4/23/22♥," she simply captioned the post. For...
BEAUTY & FASHION・29 DAYS AGO

Click here to read the full article. BUZZY LOCATION: It didn’t take more than the warm spring sun for independent perfume label Henry Jacques to attract the first visitors of its new Paris flagship — bees. Located at a building at the very beginning of Avenue Montaigne, the two-level boutique that opened in May features a small garden at the front, a rarity even in this tony neighborhood.More from WWDBurberry Paris Flagship on Rue Saint HonoréParis' Department Stores Put Gardens, Switzerland and Escapades in Christmas WindowsInside the New Bulgari Hotel in Paris But human visitors will be just as drawn to the...
BUSINESS・2 DAYS AGO
WWD

Click here to read the full article. If he had his druthers, Alen Brandman would prefer to stay in the shadows. But his enthusiasm about the growth opportunities for Psycho Bunny have prompted him to step out into the light. Brandman is the chief executive officer of Thread Collective, a Montreal-based business that started out as a children’s denim manufacturer but now produces apparel under license for a large number of brands including Bebe, Hurley, Ellen Tracy and Pajar.More from WWDWhy the Fiorucci Store Was the Mother of All Retail ConceptsUnites States Retail in the Aftermath of Police Brutality ProtestsBehind The...
BUSINESS・2 DAYS AGO
WWD

Click here to read the full article. CANNES — A castle was a fitting venue to celebrate Viola Davis for the Kering award dinner Sunday night, perched atop the hill with expansive views over the city and bay. The courtyard was filled with candlelight, adding a romantic touch to the already picturesque setting. “It makes me happy, it actually makes me happier than awards I have won for my work,” Davis told WWD about the Women in Motion recognition.More from WWDInside Chanel's Cannes PartyInside the Kering Gala at CannesInside at Dior's Cannes Fete Davis took to the stage early in the evening...
MOVIES・2 DAYS AGO
WWD

Kristen Stewart on Returning to Cannes, Taking Fashion Risks and Not Being Tamed

Click here to read the full article. Fashion risk-taker, former child actor, queer icon, movie star. There’s no one way to define Kristen Stewart, who has managed to transcend the labels pinned on her early in her career. It’s also nearly impossible to pin down her style. Her look at Chanel’s pre-party on Monday was a sheer beaded smock, tailored black pants and talons not at all beach friendly. She’d changed from the cut-off jeans she sported as she arrived in Cannes earlier in the day, and was on her way to slip into her outfit for the premiere of David...
DESIGNERS & COLLECTIONS・2 DAYS AGO

Click here to read the full article. MILAN — With a history of more than nine decades, Luisa Spagnoli knows a thing or two about women’s evolving fashion needs. Starting a few seasons back, the Umbria-based, family-run business has been carving out a revamped image, more in tune with the times and catering to a younger generation of dynamic and digitally savvy clients.More from WWDMarchesa Notte Exclusive Capsule for Rent the RunwayLooks from Dolls Kill's Line Poster GrlInside Peak at CollegeFashionista's CF Clubhouse Since last September, the brand has presented its collections with runway shows during Milan Fashion Week and Nicoletta Spagnoli, the...
DESIGNERS & COLLECTIONS・2 DAYS AGO
WWD

Click here to read the full article. As part of PVH Corp. Commitments, launched in 2021, the apparel group, through The PVH Foundation, will invest $10 million over the next four years in global nonprofit organizations to support programming and initiatives aligned with the company’s inclusion and diversity policies. The initial list of selected partner organizations is expected to increase awareness and access to opportunities in the fashion industry for individuals from underserved and underrepresented communities. They include organizations in Asia, Europe, North America, Australia and Brazil.More from WWDHubert de Givenchy's 1970s Black Cabine Models Made a Statement About DiversityTarget, PVH...
CHARITIES・2 DAYS AGO
WWD

Click here to read the full article. LONDON — Louis Vuitton has denied allegations that its Changsha boutique in China has sold a fake bag to a customer. A legal document disclosed online last week revealed that the French luxury house was ordered earlier this year by the local court of Furong district of Changsha, the provincial capital of Hunan, to compensate a customer who bought a Vaugirard handbag and a small accessory last September for 22,350 renminbi, or $3,350, from the brand’s boutique in luxury shopping mall Changsha IFS. The bag was later authenticated by a third party as fake.More from...
BEAUTY & FASHION・2 DAYS AGO
WWD

Tim Baxter spoke with WWD about the retailer's top-line gains and reduced losses amid a turbulent macro…. Get all the top news stories and alerts straight to your inbox. By subscribing, I agree to the Terms of Use and Privacy Policy. Patrice Louvet Keeps Moving Ralph Lauren Higher. The CEO...
MARKETS・1 DAY AGO
WWD

Click here to read the full article. FINCH’S NEW LAUNCH: The film industry veteran and serial entrepreneur Charles Finch can’t kick his addiction to the printed word. That’s one reason why he’s launching a magazine this week called A Rabbit’s Foot, with stories about film, art, culture and “confessions” from actors, writers and directors. It’s an insider’s look at the industry from a current, historical and international perspective.More from WWDInside the Charles Finch and Chanel Pre-Oscars Dinner in L.A.Inside the Charles Finch Filmmakers Dinner in CannesCharles Finch's pre-BAFTA dinner Chunky, pocket-sized and packed with long reads, the triannual is aimed at cinéastes...
BOOKS & LITERATURE・18 HOURS AGO
WWD

Click here to read the full article. WooCommerce, a major platform for e-commerce merchants, has expanded its partnership with the Affirm payment system into Canada. The San Francisco-based, publicly held Affirm, which enables consumers to pay by installment without any late fees or interest, is already available to U.S. merchants on WooCommerce.More from WWD2020 Holiday Gift Ideas: Google's Top Searched Beauty, Home and Tech GiftsInside the Jacquard by Google Exhibit in ParisInside Elon Musk's New Tunnel in California WooCommerce is an open-source e-commerce solution, built on WordPress, meaning it’s designed to be easy for merchants to customize and modify their e-commerce sites. WooCommerce...
TECHNOLOGY・1 DAY AGO