Get the latest breaking news, sports, entertainment and obituaries in Leesburg, FL from Leesburg Daily Commercial. 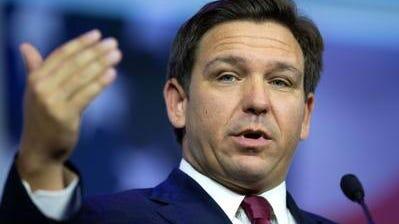 After reading the article concerning the defense bill signed by Joe Biden, I was appalled at the amount of the pay raise being given to our military of 2.7%. Inflation due to the foolish and absurd socialist policies of the Obama — sorry, Biden — regime have lowered the value of our currency and increased our national debt to levels bordering on bankruptcy. With inflation based on cost of living at 5.9%, the Democratic socialists have cut our military pay by 3.2%. Through their absurd vaccination mandates, they have caused many of our devoted patriotic military personnel to be removed from service and discharged.

Florida leads the country in COVID infections, so Gov. DeSantis and his questionable state surgeon general's solution is to suppress the amount of tests. Perhaps to make his numbers look better? Who does this remind you of?

Next, I heard on the news recently that the governor has obtained 15,000 doses of Regeneron antibodies. How strange when tests have already determined that it does not work on Omicron! Might this have anything to do with the fact that the CEO of the company that makes Regeneron was a very large donor to the PAC that helped DeSantis get elected? Oh, and of course Regeneron is an intravenous treatment that is paid for by the federal government at the price of $150 per treatment, while a COVID vaccine is $40. It kinda makes you wonder who is profiting here, doesn't it? You scratch my back, I'll scratch yours?

I have lived in four different states in my life, but never have I seen a more corrupt state than Florida.

The most secure election in history took place in 2020, especially in Florida, so now the governor is putting a team to investigate any wrongdoing that may happen. Does he really believe we're that gullible? Just who's fooling who?

I have been following a story by Rachel Maddow recently about five states that literally forged and changed the election slate documents from Joe Biden to Donald Trump illegally, and submitted these documents to authorities in hopes of altering the certification of the 2020 election. They failed, but the Maddow team of investigators wondered, how could such an act exist without coordination and conspiring? Well, emails discovered from the Jan. 6 commission investigation appear to point the finger at Mark Meadows, Trump's former chief of staff. He responded to an email request to help with this falsification by saying "I love it" and “I have a team on it.” Bingo — this gives Meadows something else to think about while he is refusing a subpoena, and facing a possible indictment. Also, all of the individuals who signed the forged above documents can be prosecuted under both state and federal law.

When we look at Trump's lawyers meeting recently with the Georgia DA, it appears the Orange Grifter may be heading for criminal election violation charges by summer. About time. I continue to wonder in amazement about the absolute criminality that occurred in the Trump administration — and the willingness of his followers to overlook everything. Hopefully the law will overcome evil. Kevin McCarthy is refusing to cooperate with the Jan. 6 commission, as is Rep. Jim Jordan. Makes one wonder, exactly what are they hiding? When we believe the absurd, we become capable of committing atrocities.

Greene testified on Friday that she didn't recall whether she asked Trump to invoke military rule, despite telling Meadows to relay the idea to Trump.
ATLANTA, GA・22 DAYS AGO
WashingtonExaminer

Former Trump lawyer Michael Cohen threw his former boss under the bus on Monday, appearing to contradict claims that the former president does not possess the documents New York Attorney General Letitia James is after.
POTUS・21 DAYS AGO
The US Sun

ANOTHER batch of stimulus checks worth up to $1,200 is set to go out to thousands of Americans this month. Under California’s Golden State I (GSS 1) and Golden State Stimulus II (GSS II) programs launched in 2021, eligible residents are getting up to $1,100 and $1,200 respectively. In...
CALIFORNIA STATE・29 DAYS AGO
Newsweek

Vladimir Putin's hand appears to tremble before he greets another man, which has sparked further concern over the Russian leader's health.
WORLD・23 DAYS AGO

When President Joe Biden named Kamala Harris as his running mate, he promised his former campaign rival would be one of the most influential voices in the White House.
PRESIDENTIAL ELECTION・22 DAYS AGO
NBC News

MEXICO CITY — Mexican President Andrés Manuel López Obrador on Monday urged U.S. Latinos not to vote in November’s midterm elections for politicians who have “mistreated” them, in response to a comment by former U.S. President Donald Trump. Trump boasted at a rally in...
PRESIDENTIAL ELECTION・21 DAYS AGO
Newsweek

The former adviser to Donald Trump said Putin probably needed glasses and ate and drank nothing at a dinner she attended, where the Russian president "barely gave her a glance."
POTUS・21 HOURS AGO
BIN: Black Information Network

A federal judge cleared the legal path for Georgia voters to stop Greene from being able to run for re-election. The Georgia rep was stripped of her committee assignments over racist comments she made online.
GEORGIA STATE・27 DAYS AGO

The intelligence the U.S. shared with Ukraine helped it continue to resist Russian invading forces and even shoot down a transport plane carrying hundreds of Russian troops, a new report revealed. According to current and former U.S. officials who spoke with NBC News on Tuesday, the U.S. provided critical intelligence...
MILITARY・21 DAYS AGO
Business Insider

The Kremlin has refused to acknowledge its death toll in Ukraine, though a spokesperson admitted that Russia suffered "significant losses."
MILITARY・22 DAYS AGO

Harvard polled Americans under 30 who are likely to vote in the midterms and found 85% of them want some government action on student loan debt.
PRESIDENTIAL ELECTION・22 DAYS AGO
Newsweek

The former president referenced scoring well on a cognitive test in 2018, which is designed to detect whether a person has early stages of dementia.
DELAWARE COUNTY, OH・23 DAYS AGO
Business Insider

Chiefs of staff and aides to House Jan. 6 committee warned to prepare for 'bombshells' ahead of public hearing, report says

A security meeting with the US Capitol Police is scheduled for May 20 to prepare lawmakers and their staff for the public hearings in June, per Axios.
CONGRESS & COURTS・2 DAYS AGO
Business Insider

Viktor Yushchenko says Putin has become a "completely isolated and brutal despot who cannot stand any opposition."
POLITICS・23 DAYS AGO

Russian President Vladimir Putin on Monday accused Western intelligence services, specifically the CIA, of advising Ukraine on how to assassinate a senior Russian propagandist, Vladimir Solovyov. While Putin said his Federal Security Service disrupted the plot against Solovyov, the evidence for the plot's existence is far from convincing. After all,...
POLITICS・22 DAYS AGO
Newsweek

The mother has questioned whether the soldiers would let her son live even if she did send the money.
MILITARY・22 DAYS AGO
Fox News

EXCLUSIVE: A group of Republican senators is introducing legislation to block the Biden administration from sending personnel and funding from the Department of Veterans Affairs (VA) to alleviate the crisis at the southern border. The senators are alarmed by the Biden administration's announced termination of Title 42 on May 23,...
CONGRESS & COURTS・21 DAYS AGO
Newsweek

Individual judges may not like the policy choices of the Biden administration, but it is not their job to weigh in on that policy debate.
TEXAS STATE・22 DAYS AGO

Get the latest breaking news, sports, entertainment and obituaries in Leesburg, FL from Leesburg Daily Commercial.