Is Crystal Palace vs Liverpool on TV tonight? Kick-off time, channel and how to watch Premier League fixture 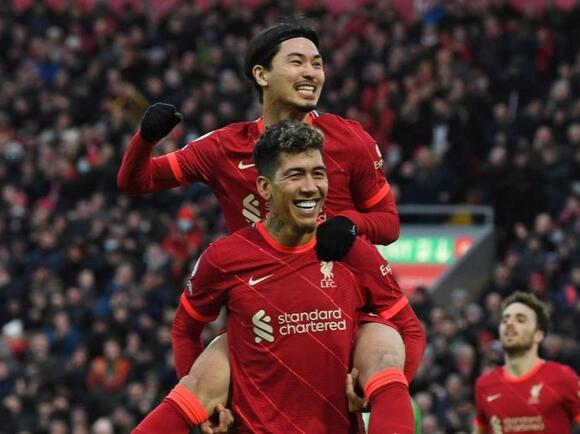 Following Chelsea’s draw with Brighton in midweek, Liverpool now look like the only team who have a chance of stopping Manchester City from claiming a fourth Premier League title in five years.

Jurgen Klopp ’s side are having to deal with a busy set of fixtures at a time when they are without both Mohamed Salah and Sadio Mane .

FOLLOW LIVE: Team news and all the action as Crystal Palace host Liverpool

Last season the obliterated Crystal Palace 7-0 at Selhurst Park and will be looking for a similar performance on Sunday afternoon.

Meanwhile, Patrick Vieira ’s team have dropped into the bottom half following a run of poor results and will be hoping to upset Liverpool in this one.

Here’s everything you need to know ahead of the fixture tonight.

When is Crystal Palace vs Liverpool?

The match will kick off at 8pm GMT on Sunday 23 January at Selhurst Park.

It will be shown live on Sky Sports Main Event and Sky Sports Premier League, with coverage starting from 1pm. Sky Sports customers can also stream the fixture via the Sky Go app.

Liverpool are reminded of ‘Crystanbul’ every time they travel to Selhurst Park - the scene of their diminishing title hopes in 2014. They looked to be missing Salah and Mane a great deal in the first leg of their Carabao Cup clash against Arsenal, but improved a little in the victory over Brentford. But Palace need a result after just one win in five and might be catching Klopp’s side at the right time. 2-2.

Liverpool manager Jurgen Klopp has questioned the wisdom of dropping a new pitch into the Stade de France two days before the Champions League final after expressing his concerns over the quality of the surface.The Reds face Real Madrid in a rematch of their 2018 encounter at the national stadium in Paris after the showpiece was moved there from St Petersburg in late February, following Russian’s invasion of Ukraine.Klopp was speaking at the ground immediately before his players trained on the newly-laid grass but his first impressions were not positive.“Usually when I say the pitch looks new, that is good...
UEFA・2 HOURS AGO
The Independent

Liverpool vs Real Madrid: How to watch Champions League final for free

Liverpool and Real Madrid will descend on the Stade de France on Saturday to compete in the Champions League final.It is a vengeful evening for the Reds as they lost to Real in the 2018 final. Jurgen Klopp’s side are the slim favourites heading into the clash but fans won’t be discounting Real, who fought back with a late equaliser and then extra time winner against Manchester City in the semi-finals.Rafael Benitez, who managed both clubs, has issued a warning to the Reds ahead of the final due to Real’s fighting spirit. He said: “At Real Madrid it’s more about...
PREMIER LEAGUE・1 HOUR AGO
The Independent

Andy Robertson has found a new way of winding up Trent Alexander-Arnold. When their paths cross, he just utters three words and they need no elaboration for either of Liverpool’s flying full backs. “I just say to him ‘by a mile’,” the Scot smiled. “I just keep saying it to him. I walk past and that’s all I need to say.”Those three words have given Robertson a chance to gloat in a friendly rivalry that has helped drive Liverpool to greatness. There are two times in recent weeks when former full backs have brought a sudden influx of messages to...
PREMIER LEAGUE・2 HOURS AGO
The Independent

Nottingham Forest boss Steve Cooper wants his side to “stand on the shoulders” of past heroes and fire the club back to the Premier League.Forest can end a 23-year exile from the English top tier if they beat Huddersfield in the Championship play-off final on Sunday.The City Ground club have a rich history, with two European Cups and domestic success under Brian Clough, but the last 35 years have been a famine.Cooper has taken Forest closer to getting back to the big time than any one else since their 1999 relegation and he wants his players to embrace the past...
PREMIER LEAGUE・2 HOURS AGO

Ivan Perisic has agreed terms on a two-year deal with Tottenham Hotspur, with sources close to the player believing the London club will beat both Chelsea and Juventus to his signature.The Croatia international is a free agent this summer, with his contract at Inter Milan expiring, and Antonio Conte has specifically named the 33-year-old as a key signing for his team. The Italian met with Spurs’ managing director Fabio Paratici on Friday morning and has agreed to stay on at the club for another season. Among his conditions was signings, with Perisic one of the players discussed.That has seen accelerated...
PREMIER LEAGUE・2 HOURS AGO
The Independent

Sports stars and clubs across the world continue to provide an insight into their lives on social media.Here, the PA news agency looks at some of the best examples from May 27.FootballHarry Kane made an appearance on The Tonight Show.“We’ve been building nicely to this World Cup, and I’m really looking forward to it.”-Harry Kane (@HKane) on this year’s #WorldCup and beating England’s goal record. #FallonTonight pic.twitter.com/MrJSyr89S9— The Tonight Show (@FallonTonight) May 27, 2022Thanks for having me on @jimmyfallon. Great to chat all things football and pick up a table football victory 😁📸 @toddowyoung 📺 @FallonTonight pic.twitter.com/389iezvudC— Harry Kane (@HKane)...
SOCCER・1 HOUR AGO
The Independent

A football supporter who chanted homophobic abuse at Chelsea fans during a Premier League match has been convicted of a hate crime and fined more than £400.Nigel Carrington, 53, used two notorious slurs during a game between Chelsea and Tottenham Hotspur at Stamford Bridge on January 23, according to the Crown Prosecution Service (CPS).Carrington pleaded guilty to two counts of using abusive and insulting words to cause harassment and distress at Westminster Magistrates’ Court on Friday, the CPS said.He was fined £150 for each count and £119 in other costs.Hate crime has no place within society, let alone sport, and...
PREMIER LEAGUE・1 HOUR AGO