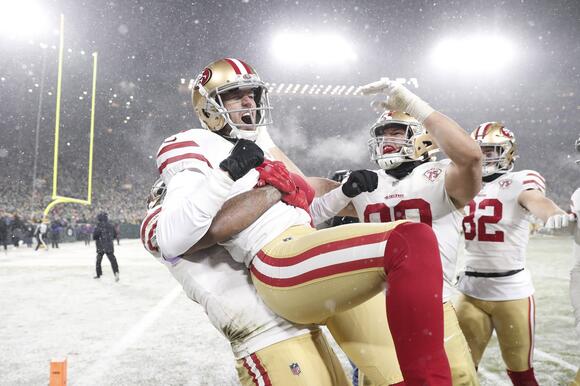 Robbie Gould pulled a page out of Jimmy Garoppolo’s book to begin his press conference Saturday night in Green Bay.

“Feels great, baby!” he belted out as he took the podium.

The 49ers kicker was probably still floating in a state of euphoria. Just minutes earlier, he knocked through a 45-yard game-winning field goal as time expired. On the snow-covered turf of Lambeau Field, no less. Gould’s kick split the uprights and gave the 49ers a thrilling 13-10 win over the top-seeded Packers in the NFC Divisional Round of the playoffs. It marked the only lead San Francisco held all game.

Gould is the guy you want kicking field goals in clutch situations. The 39-year-old is now a perfect 20-for-20 in postseason field goal attempts throughout his career. He also hit a 29-yarder in the third quarter.

“When it comes to postseason play, these are the games you live for,” Gould said. “If you don’t like these games, you’re not going to be a kicker in the National Football League very long.”

In the days leading up to Saturday’s showdown, weather reports indicated conditions could be frigid. At kickoff, it was zero degrees with windchill, marking the fifth-coldest playoff game in Lambeau Field history.

To get his mind right this week, Gould enlisted some help from former New York Giants kicker Lawrence Tynes. Back in 2007, Tynes hit a 47-yarder from the right hash at Lambeau to knock off the Packers in the NFC Championship. Gould also chatted with Minnesota Vikings kicker Greg Joseph, who was the last opposing kicker to play at Lambeau in Week 17, when he drilled a 51-yarder.

“Both of those guys have the longest field goals in Lambeau history in January,” Gould said. “Those are moments that you look at the kicker fraternity and you know that – unless you’re playing against the guy – everyone’s gonna help each other out. I appreciate both of those guys.”

Cheeseheads probably won’t be happy to find out the Vikings kicker played a small role in foiling their season Saturday night. Gould –a former Packers NFC North adversary with the Chicago Bears – showed he still has plenty of leg in his 17th NFL season.

The Packers also shot themselves in the foot by only having 10 men on the field for the final field goal try. Incredible.

Even though snow started falling at halftime, Gould said the Frozen Tundra softened up as the game progressed. Gould said he felt confident up to about 52 yards Saturday night. He also benefited from a new pair of cleats.

Following a massive punt block touchdown return and third-down stop by the 49ers defense, the offense drove down the field with a few minutes remaining. They took their time, though, as Gould admitted he had some flashbacks to Week 3.

The last time these two teams met, the 49ers left 37 seconds on the clock after scoring a go-ahead touchdown. Packers kicker Mason Crosby ended the game with a field goal as time expired. This time, Gould had the honors, and he kicked the Packers right out of the playoffs.

“To redeem ourselves on special teams and to come out with a big win at Lambeau is pretty big for us,” Gould said. “It’s pretty unique. This is a historic place.”

Bonta Hill and Joe Shasky of 95.7 The Game’s ‘The Morning Roast’ had some fun revisiting some hot takes from Nick Wright and Skip Bayless from FS1.
SAN FRANCISCO, CA・1 DAY AGO
95.7 The Game