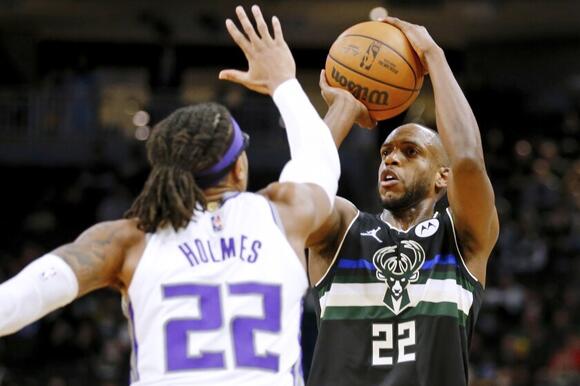 Khris Middleton scored 34 points and Jrue Holiday added 26 to lead the Milwaukee Bucks to a 133-127 victory over the Sacramento Kings on Saturday night, making up for the absence of Giannis Antetokounmpo.

The two-time MVP sat out with right knee soreness one night after scoring 30 points in a defensive struggle against Chicago. The defending NBA champions (30-19) won their third straight game and second in two nights.

Middleton sank a clutch 3-pointer with 1:09 left after the Kings (18-30), who trailed by as many as 15, rallied within three points. After Harrison Barnes converted a layup for the Kings, Holiday threw down a left-handed dunk to give Milwaukee a 126-120 lead with 47.6 seconds remaining.

Donte DiVincenzo added 20 points for the Bucks, who made 21 of 42 3-point attempts one night after shooting 19.4% from behind the arc.

Barnes paced Sacramento with 29 points, and Tyrese Haliburton had 24.

Biyombo also grabbed 13 rebounds as the Suns improved their NBA-best record to 36-9, shaking off a tough night for leading scorer Devin Booker. He had just 11 points on 5-of-23 shooting, including 0 for 6 from 3-point range.

The short-handed Pacers were coming off impressive back-to-back wins against the Lakers and Warriors but couldn’t keep the momentum going. Chris Duarte and Lance Stephenson both scored 17 points.

Jarrett Allen added 14 points and 13 rebounds for the Cavaliers, who have won six of seven.

Shai Gilgeous-Alexander paced the Thunder across the board with 29 points, nine rebounds and six assists. Kenrich Williams scored 12 points and Luguentz Dort had 10 before being ejected for elbowing Kevin Love in the head.

Ex-Warrior seems to regret leaving to sign with Lakers

One former Golden State Warriors player may be inquiring about the return policy on his free agent contract. Los Angeles Lakers swingman Kent Bazemore, who played for the Warriors last season, posted an interesting tweet Friday after Golden State clinched an NBA Finals berth the night before. “Congrats to my...
NBA・1 DAY AGO