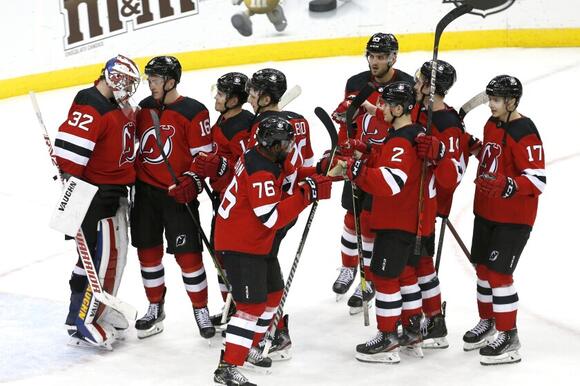 Jon Gillies finished with 31 saves while filling in for Mackenzie Blackwood to pick up his first win in four games since being acquired from the St. Louis in December.

“He gave us some saves. Obviously the start of the game probably wasn’t exactly what we wanted,” Devils coach Lindy Ruff said “I feel like his puck play is helping us break out getting the defense. Playing the puck in front of the net was exceptional. Would he want a few goals back? Yeah, he would want them, but outside of that, he made good saves at key times for us.”

Andrei Svechnikov and Josh Leivo each had a goal and an assist for Carolina, and Ian Cole and Brady Skjei also scored. The Hurricanes snapped a three-game winning streak.

Jack LaFontaine finished with 31 saves in his first career start — nine days after the former University of Minnesota goalie gave up two goals on three shots in his NHL debut.

“This is the NHL, there’s a lot of good players out there," Leivo said of LaFontaine's play. "He’s coming from college. He made a lot of saves still. They had about 40 shots, so he’s just gotta keep his head high. It wasn’t his fault. I don’t think our team played the greatest. ... The way we (typically) play, I think we would have had a better outcome. So he’s got to keep his head high. He’s got a lot of hockey ahead of him.”

After Cole was called for holding on Janne Kuokkanen, Hughes got his 10th on a wrist shot on the power play with 7:09 left in the third to put the Devils up two. Zacha scored his 10th just over a minute later to make it 7-4.

“We had a couple of guys play pretty well, but not 20, which is what we need,” Hurricanes coach Rod Brind’Amour said. “Give them credit. They played hard. They do what they want to do. I don’t think we did much of anything.”

Leivo got his first at 3:25 of the second to give Carolina a 3-2 lead before McLeod's third tied it up again nearly 5 1/2 minutes later.

Johnsson received a centering pass from Mercer and beat LaFontaine with 8:44 left in the middle period to give the Devils their first lead.

Skjei tied it again with 4:26 remaining in the period.

“Definitely wasn’t the way we wanted to play. It’s not our game. Just kind of never found it. Our game is getting pucks behind their defensemen and being hard on them,” Skjei said. “So we have to learn from this, but everyone in the locker room knows that’s not the way we play.”

Svechnikov got the Hurricanes on the scoreboard first 2:20 into the game and Cole doubled the lead 3:24 later.

Bastain scored twice 1:40 apart late in the opening period to tie it. His second of the night and eighth of the season came on a slap shot from inside the blue line and past LaFontaine.

“Feels awesome. Especially coming back from two goals,” Bastian said. ”Maybe we’ve seen in the past we get down two, we’re pretty hard on ourselves as a group and it’s tough to battle back and then kind of put the way to get away the game ourselves first, and I was really good to see.”