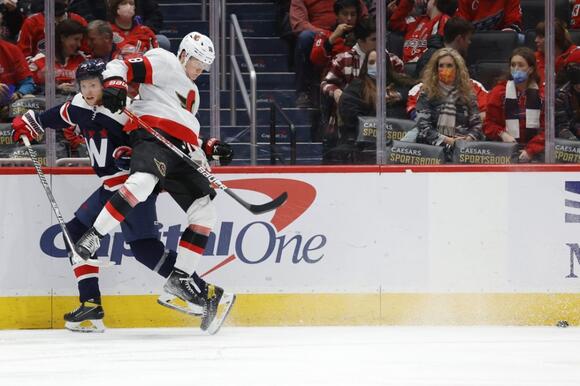 Nicklas Backstrom scored on a breakaway 1:13 into overtime as the Washington Capitals rallied to defeat the visiting Ottawa Senators 3-2 Saturday night.

Alex Ovechkin scored two third-period goals, his 28th and 29th of the season to tie for the league lead, as the Capitals bounced back from a 2-0 deficit. Goaltender Vitek Vanecek made 20 saves.

Thomas Chabot and Zach Sanford scored for the Senators, who suffered their third consecutive defeat. Matt Murray, who returned to the net after missing two games with a non-COVID-19 illness, stopped 30 of 33 shots.

The winner came after Ottawa’s Josh Norris turned over the puck in his own end of the rink to send Backstrom in alone on Murray. Backstrom deked Murray and went to his backhand, lifting the puck over the sprawling goalie.

Trailing 2-0 after two periods, Ovechkin gave the Capitals a boost with a goal 1:39 into the third. Trevor van Riemsdyk took a pass from Evgeny Kuznetsov and charged down the right wing, putting a shot off the outside of the net. The puck caromed to the front of the crease, where Ovechkin outmuscled a defenseman and lifted a shot over Murray and into the upper right corner of the net.

Ovechkin tied it at 9:43 of the period after he was left alone just outside the top of the crease. Backstrom found him with a pass from behind the net, and Ovechkin put a one-timer just under the crossbar.

The latter was Ovechkin’s 759th career goal, putting him within seven of Jaromir Jagr for third place on the league’s all-time list, which is topped by Wayne Gretzky (894) and Gordie Howe (801).

The Senators took an early lead, with Chabot scoring just 1:22 into the game. His shot from the blue line deflected off the back of a Capitals defenseman in front and past a Vanecek, who was screened. Austin Watson and Nick Paul were credited with assists.

Ottawa made it 2-0 at 6:07 of the second. Alex Formenton controlled the puck behind the net and flipped a pass out front for Sanford, who chipped the puck over Vanecek as the forward was being flattened by Washington’s Nic Dowd.

The NHL season officially started back on October 12. In this article, we track all the NHL games today as
NHL・15 HOURS AGO
Sportsnaut