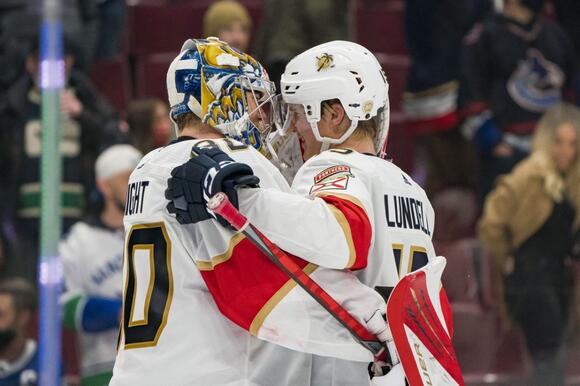 When the Florida Panthers last saw the Seattle Kraken, they were attempting to set an NHL record for most home wins to start a season.

The Panthers had won their first 11 at FLA Live Arena, matching the record set by Chicago in 1963-64.

But against former teammate Chris Driedger, the Panthers came up short.

Driedger, selected by Seattle in the expansion draft, made 33 saves and Jordan Eberle scored twice as the Kraken spoiled the party, taking a 4-1 decision.

The teams are scheduled to meet again Sunday night, this time in Seattle, although the Panthers won’t have to face Driedger this time, as the goaltender is currently in the COVID-19 protocol.

The Panthers, who entered the weekend with a league-leading 61 points, are 2-1-0 on their five-game trip that concludes Tuesday in Winnipeg. They lost the opener 5-1 Tuesday in Calgary before drilling Edmonton 6-0 Thursday and coming away with a 2-1 shootout victory Friday in Vancouver. The loss in Calgary was the only time the Panthers have failed to come away with at least a point in their past 12 games.

Against the Canucks, Spencer Knight made 27 saves.

“I thought it was a good win for the whole team,” said Knight, who improved to 8-5-2. “What’s most important is that we all stuck it out. Those are tough games to play in, back-to-backs.”

The Panthers’ Sam Reinhart netted a power-play goal 1:41 into the third period to tie the score.

“We knew we were going to make a play,” Panthers interim head coach Andrew Brunette said. “We have a lot of players that can make a play, and if we can make a play, have a chance to win the game. We made a play on the power play, which is huge on the road.”

Sam Bennett, tied for the team lead in goals with 17, sat out after suffering an upper-body injury during Thursday’s game. Brunette said that Bennett, the Panthers’ second-line center, is considered day-to-day.

The Kraken had a two-game winning streak, tied for their longest of the season, snapped with a 5-0 loss Friday to visiting St. Louis.

The Blues scored in nearly every way — at even strength, on the power play, short-handed and on a penalty shot.

The Kraken were also playing the second half of a back-to-back after beating San Jose 3-2 Thursday.

“With back-to-back games, it’s really important to have a simple game plan,” Seattle captain Mark Giordano said. “Special teams have to be good. You’re not as fresh, but you have to take advantage of your opportunities.”

The Kraken were obviously unable to do that and were blanked for the third time this season.

Joey Daccord, starting in place of Driedger, kept Seattle in the game until St. Louis scored three times in the third.

“Joey actually played really well,” said Eberle, the Kraken’s All-Star representative who is mired in a 14-game goalless slump. “He made saves to keep us in it. … We hung Joey out to dry (too many times).”

Nothing gets the people going quite like the Stanley Cup Playoffs. Find out how to live stream every NHL Playoff game here.
NHL・3 HOURS AGO
Sportsnaut

Bookmark. Save. Favorite. Do your thing. This is the one-stop-shop for everything NBA schedule-related heading into the 2021-22 season: Related:
NBA・7 HOURS AGO
Sportsnaut

The NHL season officially started back on October 12. In this article, we track all the NHL games today as
NHL・7 HOURS AGO
Sportsnaut

Our MLB Games Today schedule is back for the 2022 MLB season. Major League Baseball ended its lockout, officially clearing
MLS・7 HOURS AGO
Sportsnaut

Jayson Tatum scored 10 of his game-high 46 points in a key fourth-quarter sequence and teammates Jaylen Brown and Marcus
MILWAUKEE, WI・2 DAYS AGO
Sportsnaut

All the pressure is on the Phoenix Suns when they host the Dallas Mavericks on Sunday night in Game 7
PHOENIX, AZ・1 DAY AGO
Sportsnaut

Outfielder Luis Barrera might not be in the starting lineup Monday night for the Oakland A’s when they host the
OAKLAND, CA・6 HOURS AGO
Sportsnaut

The NHL on Sunday fined defensemen Charlie McAvoy of the Boston Bruins and Brendan Smith of the Carolina Hurricanes for
RALEIGH, NC・1 DAY AGO
Sportsnaut

MLB roundup: Pirates pull off 1-0 win despite being no-hit by Reds