Report: Matt Rhule Would Be Interested in Michigan Job if Harbaugh Leaves 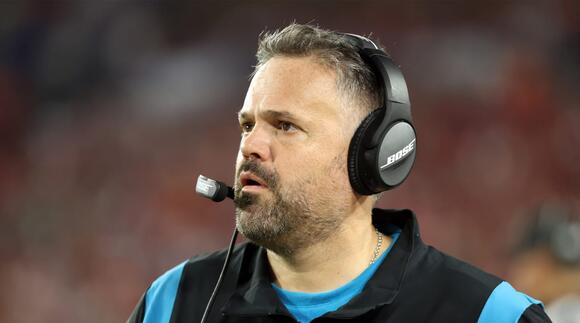 The Panthers coach has found himself in the hot seat after posting a 10-23 record in two seasons.

The current Panthers coach has found himself in the hot seat with owner David Tepper for 2022, despite the franchise reportedly planning to keep him for the 2022 season . Carolina finished 5–12 this season and went 5–11 in 2020-21.

Rhule fired former coordinator Joe Brady in December after less than two years with the franchise. Brady joined the team in 2020 after winning the Broyles Award, given to the best assistant coach in college football, in 2019 when he was with LSU.

One of the biggest question marks of the season was regarding the quarterback position, which became a revolving door featuring the likes of Sam Darnold, P.J. Walker and Cam Newton. The franchise is reportedly expected to hire former Giants head coach Ben McAdoo as the next OC.

Rhule reportedly kept an eye on Penn State, which is where James Franklin landed a major extension, per La Canfora.

In recent weeks, rumors have swirled that the current Wolverines head coach was interested in heading to the NFL, and one team—the Raiders—reportedly may have interest in their former quarterbacks coach . Harbaugh has been working on a reworked contract with the Wolverines after leading the program to the College Football Playoff.

NFL Network's Ian Rapoport said on The Pat McAfee Show earlier this week on Harbaugh, “I believe he'd be interested. Now, he's also in negotiations with Michigan, so is his interest in the NFL kinda being like, ‘Hey, Michigan...’ I can't remember a situation where there's been so much stuff coming from the Harbaugh side/Michigan side talking about NFL interest. It makes me wonder if it's on purpose...

“I know the Raiders have some interest, but they haven't engaged at all.”

In this week's recruiting mailbag, we look at how the altered group of top schools and relationships with top quarterbacks could impact the top wide receiver's decision
KNOXVILLE, TN・1 DAY AGO
Sports Illustrated

The familiar powerhouses fill up the top of the list.
CINCINNATI, OH・2 DAYS AGO
Sports Illustrated

The Raiders could decide to sign Colin Kaepernick.
PARADISE, NV・1 DAY AGO

Raiders coach Josh McDaniels and with general manager Dave Ziegler were in attendance at the workout.
NFL・2 DAYS AGO
Sports Illustrated

Las Vegas brought the former 49ers QB in for a workout on Wednesday.
LAS VEGAS, NV・1 DAY AGO
Sports Illustrated

The 48-year-old is a former Los Angeles assistant, and has been with the Bucks since the 2018 season.
LOS ANGELES, CA・1 DAY AGO

Antonio Brown Says He Won’t Play in NFL Next Season

The free-agent receiver seems content with staying at home for the 2022 season.
NFL・10 HOURS AGO
Sports Illustrated

J.J. Watt Has a Doughnut Dilemma, and We Need to Break It Down

Does he have a right to complain about free doughnuts?
NFL・1 DAY AGO
Sports Illustrated

It's only OTAs, but the Jets’ QB looks set up to improve in his second season.
NFL・2 DAYS AGO

The undrafted rookie made a one-handed grab at practice but that wasn’t the most impressive part for the quarterback.
KANSAS CITY, MO・2 DAYS AGO
Sports Illustrated

The San Francisco slugger said that the Cincinnati outfielder accused him of bending the rules in their fantasy football league.
SAN FRANCISCO, CA・22 HOURS AGO
Sports Illustrated

Dallas traded Cooper to the Browns in the offseason.
CLEVELAND, OH・22 HOURS AGO

The College Football Playoff Can Learn From Champions League

If the sport’s postseason is going to expand, exclusivity should matter. The removal of conference divisions will make it possible.
NFL・1 DAY AGO
Sports Illustrated

The resolution calls for changing the window of availability for prospective head coaches.
NFL・19 HOURS AGO
Sports Illustrated

A letter obtained by ESPN says each team reportedly must share a comprehensive plan as well as accounts and pictures of potential changes by June 3.
MLB・2 DAYS AGO
Sports Illustrated

The Browns running back is confident that his current teammate will be successful, no matter where he ends up in the future.
CLEVELAND, OH・19 HOURS AGO