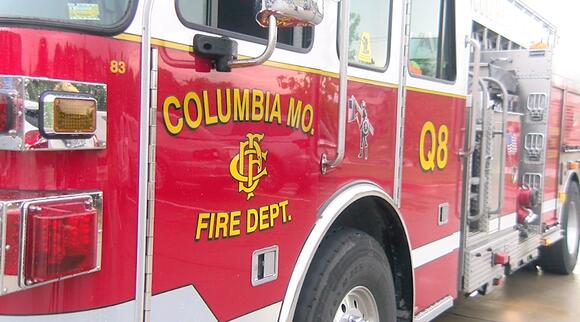 Around 9:30 a.m. on Saturday, the Columbia Fire Department was dispatched to 3101 Creasy Springs Road for a commercial structure fire.

An employee of Boone Quarries call 911 and stated there was smoke coming from the top of a building on the east quarry entrance.

The first unit arrived about five minutes later and reported smoke coming from the eaves of the structure.

Crews got the fire under control and ensuring that all occupants were accounted for. This included one adult occupant at the time of the fire.

Columbia Fire Department Investigators stated there was extensive damage to various walls and the ceiling.

The cause of the fire is under investigation. The estimated damage is $75,000.00,

Ten crews from The Columbia Fire Department and one EMS assets responded to this incident.

The post Fire in Columbia causes $75,000 worth of damage appeared first on ABC17NEWS .

Bomb dog, Burbon, helps with the search of daycare after a bomb threat on Tuesday

JEFFERSON CITY, Mo. (KMIZ) K-9 Officer Adam Hoskins and his dog, Burbon, have been assisting in bomb searches across Mid-Missouri since 2018. Hoskins and Burbon train every week in Columbia with the master trainer out here. Hoskins said that they were in the middle of a training exercise when the Columbia Police Department requested their The post Bomb dog, Burbon, helps with the search of daycare after a bomb threat on Tuesday appeared first on ABC17NEWS.
COLUMBIA, MO・15 HOURS AGO
KMIZ ABC 17 News

CAMDEN COUNTY, Mo. (KMIZ) A woman was hurt after a single-vehicle crash in Camden County on Thursday afternoon. The crash happened just before 2:10 p.m. on Westwood Drive at Dry Ridge Road, according to the Missouri State Highway Patrol. Troopers said an SUV driven by William F. Baur, 47, of Camdenton, hit an embankment after The post Woman hurt after crash in Camden County appeared first on ABC17NEWS.
CAMDEN COUNTY, MO・1 DAY AGO
KMIZ ABC 17 News

Columbia police is reporting that Alexzander Scott Green, 25, of St. Joseph, was arrested in connection with the bomb threat made at the daycare center on the 2400 block of West Ash Street on Tuesday. The post Daycare bomb threat suspect arrested in Kansas appeared first on ABC17NEWS.
COLUMBIA, MO・1 DAY AGO
KMIZ ABC 17 News

Barns and a home are damaged in Phelps County after recent storms; water rescues reported

A strong storm touched off a tornado warning and took out power to hundreds of rural cooperative members in south-central Missouri on Thursday afternoon. The post Barns and a home are damaged in Phelps County after recent storms; water rescues reported appeared first on ABC17NEWS.
PHELPS COUNTY, MO・1 DAY AGO

Hundreds of people are reported missing every year in Missouri, leaving families devastated and with many unanswered questions. While some missing persons cases are solved quickly giving families answers and closure, some cases turn cold. The post ‘Silent epidemic’ of missing Missourians leaves families searching for answers and closure appeared first on ABC17NEWS.
COLUMBIA, MO・1 DAY AGO
KMIZ ABC 17 News

Storm knocks out power to hundreds in Phelps County

The suspect in this week's bomb threat at a Columbia daycare has been prosecuted for other felonies in the past, including in connection with the shooting death of a family member. The post Suspect in KinderCare bomb threat has previous charges appeared first on ABC17NEWS.
COLUMBIA, MO・2 DAYS AGO
KMIZ ABC 17 News

A Hickory County man accused in a deadly Lake Ozark shooting during what investigators say was a motorcycle club brawl has been arrested after failing to appear in court. The post Suspect in deadly motorcycle club shooting fails to appear in traffic case appeared first on ABC17NEWS.
COLUMBIA, MO・1 DAY AGO
KMIZ ABC 17 News

OSAGE COUNTY, Mo. (KMIZ) The Osage County Sheriff's Office has suspended a case involving a Mid-Missouri daycare. Sheriff Michael Bonham announced the suspension Friday morning after investigating allegations that substances were given to children at the Busy Bee Learning Academy in Linn, Missouri. Bonham said the decision to suspend the case was made after consulting The post Investigators suspend case involving Osage County daycare’s use of herbal supplement appeared first on ABC17NEWS.
OSAGE COUNTY, MO・1 DAY AGO
KMIZ ABC 17 News

COLUMBIA, Mo. (KMIZ) A Columbia murder suspect wants his case moved out of Boone County. An attorney for Curtis Lewis says media coverage of the shooting outside Vibez Lounge in Feb. 2020 will make it hard to get an impartial jury. Police say Lewis shot and killed security guard Tershawn Kitchen in February of 2020 The post Columbia murder suspect seeks change of venue in trial appeared first on ABC17NEWS.
COLUMBIA, MO・2 DAYS AGO