#The Hockey Hall Of Fame 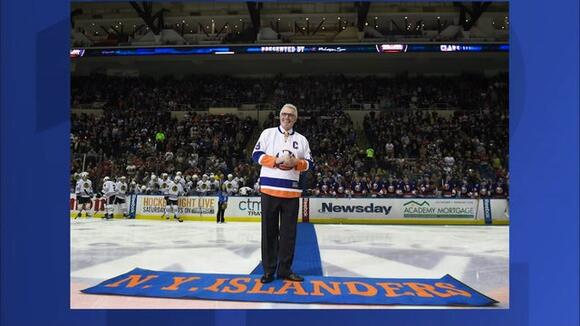 The Islanders took the ice Saturday night with heavy hearts and No. 9 patches on their jerseys in tribute to Clark Gillies, a member of the dynasty team that brought four Stanley Cups to Long Island in the early 1980s.

News 12's Logan Crawford was there at the UBS Arena.

"The National Hockey League mourns the passing of Clark Gillies, a tower of strength on the ice for the dynastic New York Islanders of the early 1980s and a pillar of the Long Island community ever since," NHL Commissioner Gary Bettman said in a statement. "Gillies helped define the term 'power forward' during a 14-season, Hall of Fame career with the Islanders and Buffalo Sabres that was highlighted by winning four straight Stanley Cups with the Islanders.

CAUGHT ON CAMERA: Husband and wife robbed at gunpoint inside their City of Newburgh restaurant

A husband and wife were robbed at gunpoint inside their restaurant last week. Sources say it is part ofa violent string of crime in the City of Newburgh over the last few days. News 12 obtained exclusive surveillance video showing the horrifying moments as the husband and wife were held...
NEWBURGH, NY・1 DAY AGO
News 12

Raul "Lito" Valle, the 16-year-old Milford resident accused in the stabbing death of Fairfield Prep student Jimmy McGrath, has been released from custody after posting $2 million bond. Valle, a student at St. Joseph High School in Trumbull, walked out of the Milford courthouse with his father's arm protectively around him. He, his family members and his attorney had no comment as they left.
FAIRFIELD, CT・1 DAY AGO
News 12

The body of a 15-year-old boy who disappeared at Great Notch Reservoir was found, according to the mayor of Woodland Park. Police and Mayor Keith Kazmark say the teen went into the water but did not come out. A search was suspended Saturday due to darkness. Officials say the body...
WOODLAND PARK, NJ・2 DAYS AGO
News 12

A Milford teen accused of fatally stabbing a Fairfield Prep student is out of jail after posting $2 million bond.
SHELTON, CT・1 DAY AGO

The owners of the store said two girls came in with the two-pound Cockapoo.
MIDDLETOWN, NY・2 DAYS AGO
News 12

The NYPD says a Brooklyn man was shot and killed on board a Q train and the suspect is still on the loose. Police report the victim boarded a Manhattan-bound Q train at 11:30 a.m. Sunday at the Dekalb Avenue subway station in Brooklyn. As the Q train crossed the Manhattan Bridge, a man allegedly shot and killed 48-year-old Daniel Enriquez.
BROOKLYN, NY・1 DAY AGO
News 12

Police: Scooter driver in Bronx fatal shooting of Khyara Tay turns self in

One week after 11-year-old Khyara Tay was shot and killed in Longwood, police have made a second arrest in the fatal shooting incident. Omar Bojang, 18, reportedly turned himself in Monday. It comes exactly seven days Tay was struck and killed by a stray bullet. Bojang was taken out of...
BRONX, NY・1 DAY AGO
News 12

A Danbury man is facing charges after police say he trespassed at a school in Wilton and gave officers a fake name before leading them on a chase. Anthony White, 26, is facing multiple charges including trespassing, breach of peace, and interfering with officers. Police say White entered the Gensis...
DANBURY, CT・16 HOURS AGO

Police: Man shot in stomach on Howard Avenue in Bridgeport

A man was shot in the stomach on Howard Avenue in Bridgeport, police say. The shooting happened Sunday around 11 p.m. in the1200 block of Howard Avenue. Police say they received multiple 911 calls about a man who had been shot. The victim was brought to the hospital by a...
BRIDGEPORT, CT・1 DAY AGO
News 12

A 2-year-old boy drowned in a backyard pool on Sunday at a home in Nanuet. The Clarkstown Police Department says it responded to 82 Tennyson Drive at 8:05 p.m. where family members had removed the child from the pool and were performing CPR. Responders attempted lifesaving measures and took the...
NANUET, NY・1 DAY AGO
News 12

A man suspected of abruptly pulling a gun and killing a stranger on a New York City subway train was arrested Tuesday, with police saying his motive for the unprovoked attack was “a big mystery.”. Andrew Abdullah, 25, was expected to face a murder charge in the death of...
NEW YORK CITY, NY・9 HOURS AGO

#The Hockey Hall Of Fame
News 12

Family, friends and the Darien community are remembering a Darien High School student after he died by suicide. News 12 has confirmed Hayden Thorsen died over the weekend. The superintendent released a statement on the sophomore's death that said in part, "This is the third student that the school has grieved in the past two months. The pain of losing these beautiful young lives is unbearable. It is devastating for the families, the school and the town. Our school community is understandably hurting from these tragic losses of life."
DARIEN, CT・1 DAY AGO
News 12

Dr. Miller says that the bites are essentially allergic reactions that can be treated with over the counter Benadryl or other antihistamines.
HUDSON, NY・3 HOURS AGO
News 12

An 18-year-old gunman opened fire Tuesday at a Texas elementary school, killing at least 18 children, officials said, and the gunman was dead. The death toll also included three adults, according to state Sen. Roland Gutierrez, who said he was briefed by state police on the fatalities. But it was not immediately clear whether that number included the assailant.
TEXAS STATE・5 HOURS AGO
News 12

Donte Lennon pleaded not guilty to a slew of charges, including DWI, manslaughter and vehicular manslaughter.
NEW HYDE PARK, NY・22 HOURS AGO

Police say they're looking for a woman who they say was involved in a Bronx bar fight in March. They say it happened at a bar in 119 E. 233rd St. News 12's Noelle Lilley is at the Alert Center with information on the fight.
BRONX, NY・13 HOURS AGO
News 12

Bronx District Attorney Darcel Clark and NYPD officials announced that 29 people, including a teenager, were indicted in connection to shootings in Highbridge and violence at Rikers Island. Clark says the members and allies are allegedly from the RPT organization. They’re being charged with attempted murder, attempted assault and use...
BRONX, NY・9 HOURS AGO
News 12

A curfew was issued for the city of Long Branch Saturday night. Police said no one as 9 p.m. would be allowed out on any public street. The curfew will be in effect until Sunday 5 a.m. News 12 New Jersey observed a large police presence near Pier Village. Police...
LONG BRANCH, NJ・2 DAYS AGO
News 12

Authorities say the fatal car fire on Shore Road near the Split Rock Golf Course that took place earlier in May has been labeled as a double homicide. Police say in addition to extensive burns on the victims' bodies, each of the victims sustained gunshot wounds to their heads and bodies.
PUBLIC SAFETY・1 DAY AGO