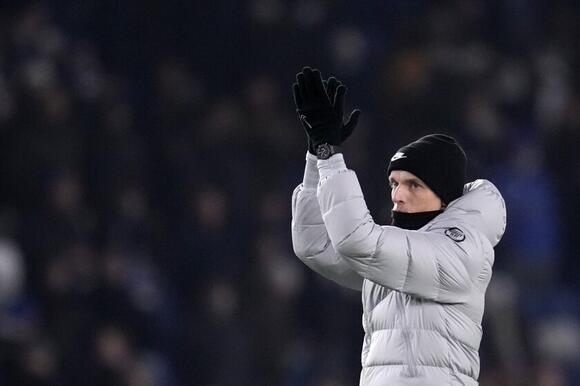 After earning back-to-back wins over Tottenham this month to reach the League Cup final, host Chelsea plays its London rival again in the Premier League in what appears a forlorn attempt to chase down leader Manchester City. Chelsea is in third place, 13 points behind City and without a league win in four games. Perhaps more significantly, Chelsea is only eight points ahead of Tottenham having played four more matches because of postponements due to COVID-19 cases. Second-place Liverpool is at Crystal Palace and is 12 points behind City, which drew 1-1 at Southampton on Saturday, having played two games fewer. Over a coronavirus outbreak among its squad, Burnley plays its first league game since Jan. 2 in a trip to Arsenal, while Leicester hosts Brighton.

Real Madrid can secure a six-point lead over second-place Sevilla when it hosts Elche in the Spanish league. Sevilla dropped points in a 2-2 home draw with Celta Vigo on Saturday. It will be Madrid's second consecutive match against Elche after a 2-1 extra-time victory in the round of 16 of the Copa del Rey on Thursday. Elche will be without several players because of injuries and coronavirus infections. Eden Hazard could make his return to Madrid's starting lineup after scoring the winner in the Copa match, while Gareth Bale may also get his chance after a long injury layoff. Barcelona visits relegation-threatened Alavés looking to get closer to the Champions League places. It sits seventh, 17 points behind Madrid, and is coming off elimination against Athletic Bilbao in the Copa del Rey and against Madrid in the Spanish Super Cup.

Both AC Milan and Juventus have recent bad memories of San Siro ahead of their eagerly anticipated Serie A match at the iconic stadium. After a dispiriting loss to Spezia, second-place Milan can't afford another poor result if it wants to keep the pressure on leader Inter Milan. Milan is five points behind Inter and only two points above third-place Napoli, which hosts bottom club Salernitana. Juventus would move fourth with a win. Roma and Fiorentina will want to keep their European hopes alive when they visit Empoli and Cagliari, respectively. Near the other end of the table, Spezia hosts Sampdoria. Also, Torino welcomes Sassuolo.

Bundesliga leader Bayern Munich visits struggling Hertha Berlin and aims to restore its six-point advantage over Borussia Dortmund. Hertha hasn’t won any of its last three games and was knocked out of the German Cup by city rival Union Berlin on Wednesday. Another defeat would leave it just three points above the relegation zone. Hertha forward Stevan Jovetic could return against Bayern after more than five weeks out with a calf injury, while it’s unclear if defenders Jordan Torunarigha and Niklas Stark will recover from knocks in time to play. Leipzig hosts relegation-threatened Wolfsburg in the other game.

Kylian Mbappe and Lionel Messi are available for PSG’s home game against Reims in the French league. PSG coach Mauricio Pochettino said he will include both players in his squad after they took part in collective training on Saturday. Messi has recovered from the COVID-19 infection that kept him away for about a month while Mbappe is fit again after suffering from a minor muscle problem. Pochettino said Mbappe could even start the match for the league leaders. The injured Neymar remains sidelined. Third-place Nice plays at Metz.

‘What can I do?’ asks the Australian after a straight-sets defeat to 13-time French Open champion Rafael Nadal
TENNIS・2 HOURS AGO