Tom Brady, Buccaneers set to take another crack at Rams in NFC divisional round Sunday 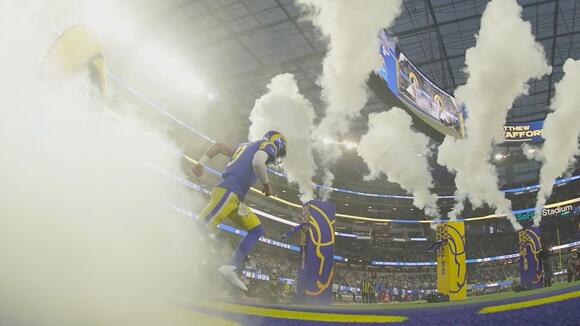 Tom Brady and the Tampa Bay Buccaneers are excited about another opportunity to face a regular-season nemesis in the playoffs. The defending Super Bowl champions host the Rams in the NFC divisional round Sunday, looking to avenge a pair of losses to the only team they've played but yet to beat since Brady joined the Bucs in 2020. The New Orleans Saints have been Brady's biggest nemesis the past two seasons, however, the Rams have been tough on the 44-year-old quarterback, too. Brady is 2-0 in postseason rematches against opponents who defeated Tampa Bay during the regular season, beating the Saints on the road in last year's playoffs before taking down Patrick Mahomes and the Kansas City Chiefs in the Super Bowl. Now, the Rams (13-5) stand between the Bucs (14-4) and another trip to the NFC championship game. "I think all of these games are little bit independent from one another. Yeah, we played them earlier in the year, but it's a very different team we had, and I think a little bit of a different team they had, too, so they are each their own individual type of game," Brady said of Tampa Bay's recent success in the playoffs against opponents that beat them earlier in the season. "The point is it doesn't really matter what happened ... when we played them last. It's really about this game and what we learned from the last game," he added. "Any time you know your opponent, I think that gives you a little bit of understanding of kind of what they do well, things you wish you would've done. But it's a very talented football team, one of the great teams in the NFL. ... It's going to be a very, very difficult game for us." The Bucs are 29-9, including 5-0 in the playoffs, since Brady's arrival. The Saints and Rams have handed them six of those losses. The eventual division winners met in Week 3 in Los Angeles, with the Rams getting off to a fast start en route to a 34-24 victory. Brady attempted 55 passes and threw for 432 yards but just one touchdown in that game. He was also Tampa Bay's leading rusher with 14 yards that day. That's never a good sign for the Bucs. Los Angeles cornerback Jalen Ramsey noted a lot has changed since, ranging from the Bucs having a different look due to injuries and the Rams adding Odell Beckham Jr. on offense and Von Miller on defense. "That was a while ago. Different people have stepped up for each team ... and a lot more is on the line right now," Ramsey said. What hasn't changed is what the Rams feel they have to do to win. In addition to another strong performance from quarterback Matthew Stafford, who got the first postseason win of his 13-year career last week, Los Angeles feels it's imperative that the Aaron Donald-led pass rush have a big game, too. "Seems like Week 3 was an eternity ago now," coach Sean McVay said, adding the Rams embrace the challenge of facing Brady and the defending champs. "It's a great opportunity. ... I'm hoping that we continue to earn more opportunities," Stafford said. "That's the goal at this point - find ways to win games, no matter what it looks like."

The Rams' secondary actually played well last week despite the absence of both starting safeties, holding Arizona to 122 net yards passing. Starter Taylor Rapp is out again with a concussion, so Los Angeles must continue to rely heavily on backup safeties Nick Scott -- who didn't come off the field against Arizona -- and Terrell Burgess along with 37-year-old Eric Weddle, who ended a two-year retirement and played 19 snaps for LA. Three-time All-Pro Jalen Ramsey is the logical matchup against Mike Evans, although the Rams prefer not to isolate Ramsey on one receiver constantly. Rob Gronkowski is a difficult matchup for linebackers or nickel backs, yet LA held San Francisco's George Kittle to 10 yards receiving in the regular-season finale and then held Zach Ertz to 21 yards last week.

The Rams' rushing game got exponentially more dangerous in the past two weeks with the addition of Cam Akers, the second-year pro who tore his Achilles tendon in July. Akers had 95 total yards against Arizona, showing off an explosiveness that juiced a running attack ranked in the bottom third of the NFL in yards per carry during the regular season. With a fresh Akers splitting work with dependable Sony Michel, Los Angeles easily could improve on its 76 yards rushing against Tampa Bay in the teams' first meeting this season. Those plans could be hurt with left tackle Andrew Whitworth unable to return from injuries to his ankle and knee, although backup Joseph Noteboom is also a dependable run blocker.

Making the back end of the Seahawks' roster will be extremely difficult for receivers this summer, but seventh-round pick Bo Melton may be the most well-equipped player to break through.
SEATTLE, WA・18 MINUTES AGO
Patriot Country

Versatile offensive target Ty Montgomery is ready to do whatever is asked of him with the New England Patriots.
FOXBOROUGH, MA・16 MINUTES AGO
TheMagicInsider

The Magic could use some veteran leadership.
ORLANDO, FL・13 MINUTES AGO