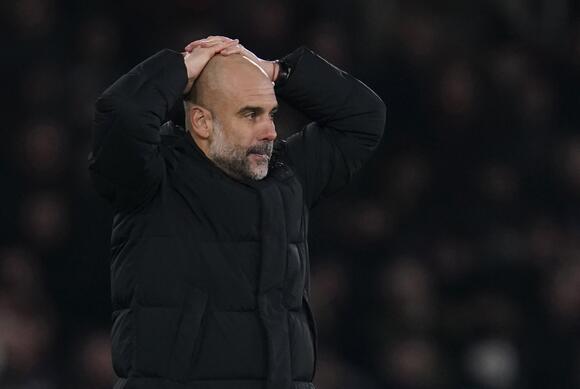 Reigning champions City were unable to stretch their winning run to 13 top-flight games after being forced to come from behind at a boisterous St Mary’s.

But the runaway leaders could not find a winner as they dropped points for the first time since late October, leaving them 12 above second-placed Liverpool albeit having played two games more.

Despite the minor setback, City manager Guardiola had no complaints about the performances of his players.

“That’s why it is the hardest prize to achieve every season, the most important one,” he said of the title.

“It’s so difficult, with different contenders, everyone is ready. We are the reigning champions, we have won a lot in the past, and it’s not so funny for the rest, so it’s more difficult to win and win.

“That’s why making back-to-back titles in the last 12, 13 years has happened only once, which was ourselves, and now we’re trying to do it again.

“We know how difficult it is and I don’t need to win, draw or lose today to know that we still have a lot of games to play. What we have to do is try to behave and play the way we played today.

“Even winning today, the title race would not be over. In January, no one is champion, there are many games that must be played.”

City monopolised the ball on the south coast but were facing an uphill task after just seven minutes when recalled Southampton defender Walker-Peters delighted the home crowed by lashing home his maiden Premier League goal.

On-loan Saints striker Armando Broja had a tidy finish disallowed for offside and also nodded against a post before unmarked defender Laporte headed home a Kevin De Bruyne free-kick with 25 minutes to go.

City, who wasted a golden first-half chance through Raheem Sterling, pushed hard to maintain their lengthy winning run, with De Bruyne and Gabriel Jesus each striking the right post.

De Bruyne also saw penalty appeals waved away by referee Simon Hooper following a VAR review after going down on the edge of Saints’ box while being challenged by Mohammed Salisu and Oriol Romeu.

“We play to play good and try to defend our badge and our people as best as possible and the title will always be a consequence of what we’ve done,” said Guardiola.

“Today was really good. We played really well – maybe for 15, 20 minutes, we were not aggressive enough – but the last 20, 25 minutes (in the first half) we were excellent and the second half was excellent too.

“We made an excellent performance today against a top side who defended well and punish on the counter attack.

“It’s always tough to play against them because they have experience and many, many things, and they made an exceptional performance.”

Liverpool fans flood into Paris ahead of Real Madrid showdown

Tens of thousands of Liverpool fans have sung “You’ll Never Walk Alone” in Paris ahead of the Champions League final.The Reds will take on 13-time winners Real Madrid at the Stade de France, just north of the city, on Saturday evening.A huge sea of red shirts surrounded the Cours de Vincennes area in the south-east area of the city during the morning, where a fan zone has been set up.As many as 50,000 supporters, largely ticketless, began gathering early during the day, some starting the drinking from 7am, bringing traffic in the area to a standstill as roads were closed...
PREMIER LEAGUE・1 HOUR AGO
The Independent

That Liverpool are a better team than Real Madrid is a fairly uncontroversial point ahead of this year’s Champions League final. The consensus is that they will have the edge in many of the individual match-ups across the pitch at the Stade de France. There is no easy way to stop Jurgen Klopp’s side from playing their game. There is an obvious way to hit them back, though.And in Paris, they will come up against the opponents who were responsible for their most recent Champions League exit in April of last year. Liverpool were short of any of their first-choice...
PREMIER LEAGUE・7 HOURS AGO
The Independent

There are big screens across the city, every hotel room is booked out, and, down at Jurgeon’s Bierhaus, it’s already approaching standing room only.This is Liverpool city centre hours before Saturday night’s Champions League Final.The Reds are aiming to win their seventh European Cup when they take on Real Madrid in Paris.And, while more than 100,000 fans are estimated to have travelled to the French capital, Liverpool itself is both buzzing with excitement and preparing for a huge economic boon on the back of the big game.“We can’t wait, mate,” said an already under-the-cosh bar staffer at Jurgeon’s, a German...
PREMIER LEAGUE・1 HOUR AGO
The Independent

Ryan Yates’ only experience of Nottingham Forest in the big time is watching old episodes of ‘The Premier League Years’, but he is determined to get the club back there this weekend.The midfielder, who joined the club as a schoolboy, was 18 months old when Forest were last in the top flight, but can help end a 23-year exile if his side beat Huddersfield in the Sky Bet Championship play-off on Sunday.Yates has spent many hours watching the nostalgic show, gorging himself on Teddy Sheringham’s famous goal against Liverpool in 1992, but wants a slice of the action for himself....
PREMIER LEAGUE・6 HOURS AGO

Coach carrying Liverpool fans for £1 each arrives in French capital

A coach bought by a Liverpool supporter to transport dozens of fellow fans to Paris for just £1 each has arrived in the city ahead of the Champions League final.The Reds will take on 13-time winners Real Madrid at the Stade de France on Saturday, with many fans facing huge fees to get to the city.Simon Wilson, a British vlogger, from Wrexham, bought the cheapest coach he could find for £5,000 to take as many fans there to avoid the “extortionate” travel fees.Just £1 each meant around 50 supporters could go from Anfield to the French capital in time for...
PREMIER LEAGUE・1 HOUR AGO
The Independent

Jonathan Hogg: Huddersfield better equipped for Premier League than in 2017

Huddersfield captain Jonathan Hogg believes the club is better equipped for the Premier League than it was under former boss David Wagner.The Terriers crashed out of the top flight after two seasons in 2019 and can return with victory against Nottingham Forest in Sunday’s Sky Bet Championship play-off final.Hogg, 33, the only remaining player from Wagner’s class of 2017, said: “As a squad I think we are better equipped, but we’ve got to get there first.“Maybe as individuals we don’t have the quality of (Aaron) Mooy and (Philip) Billing and people like that, but that togetherness we’ve got is special....
PREMIER LEAGUE・1 HOUR AGO
Futbol on FanNation

Liverpool face Real Madrid in the Champions League final at the Satde de France in Paris.It is a final covered in “great irony”, with Jurgen Klopp’s side able to secure a famous cup treble and seventh heaven for the Reds in terms of European Cups. While Los Blancos can add a 14th European crown. It is, of course, a repeat of the 2018 final in Kyiv, where Sadio Mane cancelled out Karim Benzema's opener, which came from a howler from Loris Karius. A famous double from Gareth Bale, including a spectacular bicycle kick to hand the Spaniards the lead, soon...
PREMIER LEAGUE・1 HOUR AGO

Although the Liverpool players attempted to treat this like any of the many big games they’ve played, it took a mere step on the Stade de France pitch to change that. This is the club’s third Champions League final in five years, but there’s still that extra electrical charge to the air.“It’s the occasion, it’s talking in a press conference here,” Trent Alexander-Arnold said. “There’s different things you do around the game. It’s the special game, the one that everyone wants to play in.“It’s the game of the season.”The hope is that it will also be the game of the...
SOCCER・7 HOURS AGO
The Independent

Is Karim Benzema the deadliest finisher in Europe? The data behind the world’s best goalscorers

After one of Karim Benzema’s 10 goals during the Champions League knockouts, someone on BT Sport’s commentary team declared we were watching “the best finisher in the world”.It is hard to argue (though we will). Benzema has had an incredible season, scoring 44 goals in 45 games, including 15 in the Champions League which puts in reach Cristiano Ronaldo’s record of 17 in a single campaign – Benzema scored hat-tricks against PSG and Chelsea, and it is not unimaginable that he might leave Saturday’s final against Liverpool with the match ball under his arm and Ronaldo’s record too.But finishing is...
UEFA・8 HOURS AGO
The Independent

The sale of Premier League club Chelsea is expected to be completed Monday after a “final and definitive" agreement was reached with the consortium fronted by Los Angeles Dodgers part-owner Todd Boehly.The club said Saturday that “a final and definitive agreement was entered into last night” to sell to the Boehly and Clearlake Capital consortium. The price is 2.5 billion pounds ($3.2 billion) — the highest ever for a sports team.“It is expected that the transaction will be completed on Monday,” the club said.The announcement followed a series of approvals allowing Roman Abramovich to sell after he was sanctioned...
PREMIER LEAGUE・5 HOURS AGO
The Independent

A Liverpool fan was “devastated” when his flight to France for the Champions League final was cancelled, leaving him in “limbo” at an airport for six hours.Keenan Downey and his father Leslie arrived at Liverpool John Lennon Airport at 1.30am on Saturday, hoping to catch a 4am flight to Paris.However, they were among scores of fans who faced lengthy delays after a flight cancellation.Mr Downey, 25, who travelled from Anglesey, Wales, says the flight was rescheduled to depart at 5.45am but was cancelled.He was then told there was no flights left at 3.30am, leaving him “stood around helpless”, before he finally...
SPORTS・2 HOURS AGO