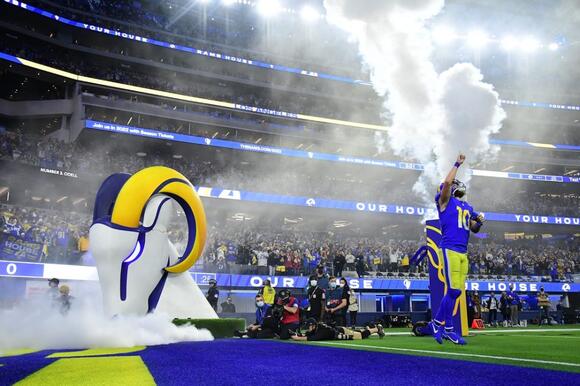 Sunday’s NFL doubleheader opens with the Los Angeles visiting the Tampa Bay Buccaneers, a rematch of Week 3 game won by the Rams.

From a betting perspective, there is a reasonable argument that either team could win this game — and reach the Super Bowl out of the NFC with another victory next week — which ratchets up the investment intrigue.

To get into the action with a bet, we cooked up a Same Game Parlay that includes some extremely high hit-rates on the season. This particular SGP was constructed on FanDuel.

Rams vs Buccaneers SGP: +173 on FD
This parlay is four legs, and before we break down why each is a part of this bet, let’s show the entire SGP.

If you wanted to increase the odds, you could bump up each of these prop totals, but we went with the safer route with some low totals.

–Cooper Kupp 70+ Receiving Yards
We start with Cooper Kupp. Kupp was the best wide receiver in football this season, leading the league in receptions, yards and touchdowns.

His over/under for this game is currently at 100.5 yards, so 70-plus should be well within grasp against a sagging secondary.

Kupp hit this total in 16 of 18 games this season, good for an 89% hit rate. Considering he’s averaging 111.6 yards per game and seeing 11 targets per game from Matthew Stafford, I feel comfortable with this number.

The Buccaneers secondary is where you’ll want to attack if you’re the Rams, with a strong run defense poised to shut down the combination of Sony Michel and Cam Akers.

In a game that should have plenty of scoring, Los Angeles will turn to the passing game, and in turn, Kupp.

Brady hit this total in 15 of 18 games this season, including against the Rams — finishing with 432.

Los Angeles has the best run defense in football, and no team throws more often than Tampa Bay.

Brady is averaging 310.4 passing yards per game this season.

I like Johnson to exceed 25 receiving yards, which he’s done in two of the last three games since Chris Godwin went down with a torn ACL.
Johnson is third on this team in targets and the WR2 in this offense.

Los Angeles allows the third-most receptions per game to wide receivers, and Johnson is sure to get some looks from Brady.

–Rams +10.5
This is another underdog that I think can win this weekend, so we bump the spread to +10.5 for some insurance.

Brady’s biggest losses in the postseason have typically come against teams with an elite pass rush. Well, Aaron Donald and Von Miller make up just a part of what has been the best defensive line in football this season. The Rams’s 50 sacks are third in the NFL and they should be getting to Brady all game.

If Stafford can pick apart a vulnerable secondary and this Los Angeles defense comes to play, the Rams can at minimum keep this game within 10 points.

This is another I would be comfortable bumping to less of a spread to boost your SGP odds.

This NFC battle on Sunday should be a good one, so enjoy the game and the entire weekend of football!

Colin Kaepernick participated in a workout with the Las Vegas Raiders on Wednesday. The workout is undoubtedly the largest stride Kaepernick has made in returning to the NFL. But how did it go? Is Kaepernick the newest face of the franchise, and is Derek Carr’s position as the Raiders starting quarterback still intact?
LAS VEGAS, NV・1 DAY AGO
Sportsnaut

After five seasons entirely out of football, former San Francisco 49ers quarterback Colin Kaepernick is back in action. Or at
SAN FRANCISCO, CA・23 HOURS AGO

Minnesota Vikings’ 2022 top pick Lewis Cine was recently asked which player in the league he is most looking to
MINNEAPOLIS, MN・3 HOURS AGO
Sportsnaut

The Sugar Bowl will be played on New Year’s Eve at 12 noon ET on Dec. 31 next season, rather
NEW ORLEANS, LA・22 HOURS AGO
Sportsnaut

Earlier on Tuesday, a report broke that the NFL Pro Bowl game could be replaced with powers that be believing
NFL・2 DAYS AGO

Kansas City Chiefs superstar tight end Travis Kelce knows he is not paid on a level equal to his production,
KANSAS CITY, MO・5 HOURS AGO
Sportsnaut

Cleveland Browns tight end David Njoku has been an enigmatic figure since they made the former Miami (F) star a
CLEVELAND, OH・2 DAYS AGO
Sportsnaut

Colin Kaepernick worked out for the Las Vegas Raiders this week, a potential first step towards making an NFL comeback.
ANN ARBOR, MI・8 HOURS AGO
Sportsnaut

Deebo Samuel and the San Francisco 49ers seemingly found themselves at an impasse this offseason. The All-Pro wideout wanted a
SAN FRANCISCO, CA・2 HOURS AGO