Global cannabis sales are projected to reach $176 billion by 2030. What's more, U.S. legal marijuana sales are expected to make up more than half of this total at nearly $100 billion per year by the end of the decade, according to the marijuana research firm Research and Markets. And if this upbeat forecast turns out to be correct, the legal marijuana industry will post a compound annual growth rate of roughly 24% from 2021 to 2030. Legal marijuana is thus on track to be the fastest-growing industry this decade.

Despite this blistering growth rate, publicly traded marijuana stocks have been a huge disappointment for shareholders over the past four years. Bureaucratic red tape, legal roadblocks in key markets including the U.S. and European Union, overly aggressive expansion plans by the industry's biggest names, never-ending capital raises at shareholders' expense, white-hot levels of competition from both legal and black-market growers alike, and an ongoing shift in consumer dynamics have all acted in concert to crush valuations across the space. 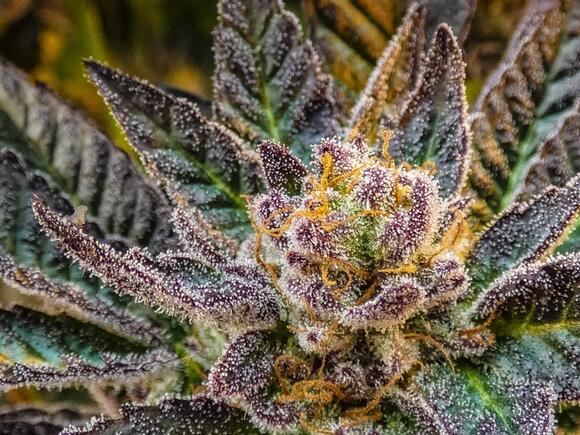 Legal marijuana's growing pains sparked widespread consolidation across the industry in 2021. Last year, Canadian cannabis titans Aphria and Tilray Brands (NASDAQ: TLRY) tied the knot, Canopy Growth (NASDAQ: CGC) struck multiple high-dollar deals to shore up its position in its domestic market of Canada and prepare for an eventual dive into the U.S. market upon federal permissibility, and scores of U.S. based multistate operators agreed to join forces in 2021.

Most industry insiders, however, agree that a lot more deals -- especially in the hotly contested Canadian market -- will be required to improve free cash flows, gross margins, and the overall investability of legal marijuana as a whole. Here is one hypothetical mega-deal that would go a long way toward improving market conditions in the Canadian cannabis market.

The Canadian megamerger that ought to happen

Even as Canadian licensed producers (LPs) have struck dozens of merger agreements over the past couple of years, the country's biggest names in terms of the scale of their commercial operations -- Aurora Cannabis (NASDAQ: ACB) , Canopy, and Tilray -- have all failed to achieve profitability on a consistent basis, and most analysts expect these three companies to be cash flow negative on a full-year basis over the next fiscal period.

Keeping with this theme, Wall Street recently slashed the 12-month sales targets for Aurora, Canopy, and Tilray because of growing competition from top-notch craft producers such as OrganiGram , falling prices across every product category, and less-than-perfect internal controls. As a direct result, these Canadian cannabis behemoths have all seen their share prices crater of late: 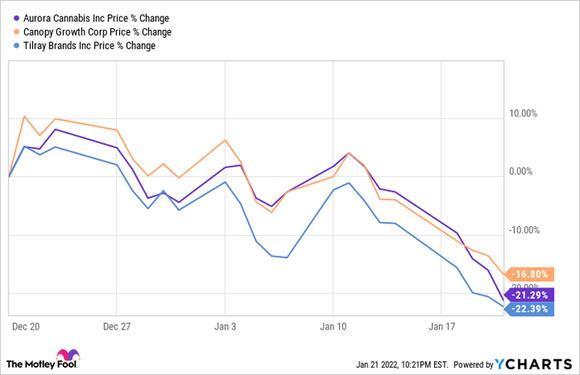 What's key to understand is that these top Canadian LPs have long been banking on U.S. federal legalization to change their fortunes. However, the Biden administration hasn't shown any interest in this idea. While President Biden has signaled a willingness to consider increasing access to the plant for research purposes and enacting reforms on the criminal-penalty aspects of cannabis, full-scale legalization doesn't appear to be in the cards on his watch. In fact, the U.S. may not legalize marijuana at the federal level until the tail end of the decade, even as lawmakers on both sides of the aisle push for major cannabis reforms.

These top-tier Canadian LPs, in turn, would be wise to double down on their domestic and ex-U.S. international commercialization efforts through a megamerger. Such a move would bring upwards of $2 billion in U.S. sales under one roof by the next fiscal year, significantly lower white-market competition in Canada, and give the newly formed entity far greater pricing power in its domestic market.

The rationale for such a merger is further supported by the fact that Aurora, Canopy, and Tilray don't have the type of rock-solid fundamentals to mount a comeback in this moody market as standalone entities. The Canadian cannabis market simply isn't big enough to support all three of these companies in a comfortable manner, especially with a handful of craft competitors nipping at their heels and price compression across every product category becoming a serious headwind in the country.

All that said, the probability of a megamerger appears to be on the low side. Tilray is attempting to rebrand itself as a global consumer-goods company in the eyes of investors, and Canopy seems committed to its U.S. expansion plans -- despite the lack of support for federal reform at the highest levels of government.

And why this could be a buying opportunity for long-term investors.
STOCKS・23 HOURS AGO

With time and patience, you can add zeros to your net worth.
STOCKS・1 DAY AGO
WebMD

The pharmaceutical company Pfizer has voluntary recalled a blood pressure medication for the second time in a month. Pfizer is recalling five lots of blood pressure medicine Accupril because of elevated levels of a nitrosamine, Nnitroso-quinapril, the company said in a news release posted Friday on the FDA website. Nitrosamines...
INDUSTRY・29 DAYS AGO
The US Sun

MILLIONS of Americans are set to receive Social Security checks worth up to $1,657 tomorrow. The cash boost will come just 48 hours before Supplemental Security Income payments, worth up to $841, are set to land in around eight million bank accounts on April 29. Seniors with birthdays on the...
BUSINESS・29 DAYS AGO
Newsweek

Colorado Governor Jared Polis cited the "impacts of inflation and the cost of living" as reasons for the tax rebate program.
COLORADO STATE・29 DAYS AGO

Expectant mothers in quarantine are only given two painkiller pills a day — the same treatment given to all COVID-19 patients, sources told RFA.
PUBLIC HEALTH・1 DAY AGO
The Motley Fool

It pays to check these off your list -- and soon.
REAL ESTATE・2 DAYS AGO
WashingtonExaminer

Australian Prime Minister Scott Morrison warned China and the Solomon Islands against allowing a Chinese naval base on the islands, saying it was a "red line."
POLITICS・29 DAYS AGO
Fortune

Sign up for the Fortune Features email list so you don’t miss our biggest features, exclusive interviews, and investigations. Shanghai’s 25 million residents have endured an extreme COVID lockdown for nearly a month—and now a new nightmarish topic is trending on Weibo, the country’s Twitter-like social media platform.
PUBLIC HEALTH・29 DAYS AGO
US News and World Report

The former F-35 test pilot Billie Flynn told The Aviationist that moving to the "cosmic spaceship" that is the F-35 was too much to ask of MiG pilots.
AEROSPACE & DEFENSE・29 DAYS AGO
The Motley Fool

If you're getting a home inspection, be on the lookout for this important contract term.
REAL ESTATE・2 DAYS AGO