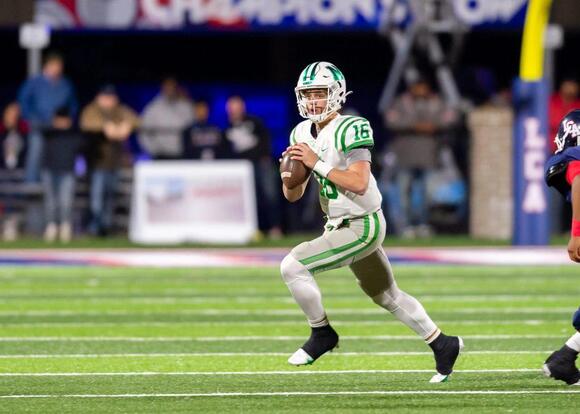 Arch Manning. If you’re a college football coach in need of a quarterback in the next few years, you may be on the recruiting trail, right? So it’s no surprise to see Alabama ‘s Nick Saban doing just that, out there scouting and recruiting high school quarterback prospects, with the idea that they could someday play for the Crimson Tide. What if there was a possible generational talent like Arch Manning who has yet to commit?

Well, you’d likely do what it takes to try and land the No. 1 recruit from the class of 2023, even if that means going to watch him play basketball instead.

No, Saban isn’t picking up duties for the Crimson Tide basketball program, he’s simply working a new angle, taking any chance he receives to show the Mannings he’s interested in their latest prodigy. To be clear, programs are not allowed to speak to Arch, since he is still a junior in high school, but that doesn’t prevent them from showing their interest in other ways.

Cooper and Arch Manning – the story

We’ve gotten this far without mentioning Manning’s pedigree, as if you don’t already know. Arch Manning is the son of Cooper Manning, who was the third brother of the legendary Manning quarterback club. Although, Cooper was more athletic and was always destined to be a wide receiver instead of a QB like the rest of the male athletes in his family.

Unfortunately, when he was just 18 years old, Cooper was diagnosed with spinal stenosis, which is an ailment that narrows the spinal cord. This discovery ended his playing career forever, restricting him the chance to pursue the biggest dreams he ever had, along with his two younger Manning Bros.

While Cooper was obviously hurt, it never took away his passion from the game. After growing up watching his dad Archie dominate the competition, Cooper stayed involved in football, cheering on his brothers Peyton and Eli with every victory. Cooper wore No. 18 in high school, which is why Peyton chose that number for his playing career in the NFL.

Now, Cooper has a chance to start his own legacy, this time with his son Arch potentially reaching the NFL someday too. Arch is a quarterback and is the No. 1 ranked pro-style QB in the class of ’23

But first, he needs to pick a college. As you can imagine, programs all around the nation are lining up just to catch a glimpse of the latest Manning offspring. 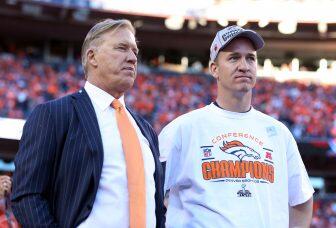 Where is Arch Manning going to play college football?

Currently attending Isidore Newman high school located in Louisiana, Arch Manning has received 13 official offers from college programs. Some of the top colleges in pursuit of Arch include Alabama, Georgia, Texas, and Ole Miss. The Ole Miss Runnin’ Rebels are an interesting name to keep an eye on. Cooper, his dad, initially committed to Ole Miss, and Eli Manning went there as well. Tennessee, Peyton’s alma mater, has also offered Arch a scholarship.

Needless to say, the youngest Manning will have several options to choose from when he commits next year. For now, coaches may have to stick to watching him play basketball.

Earlier on Tuesday, a report broke that the NFL Pro Bowl game could be replaced with powers that be believing
NFL・22 HOURS AGO
Sportsnaut

Milt Wagner, a former star guard at Louisville and the grandfather to top recruit D.J. Wagner, was announced Tuesday as
LOUISVILLE, KY・22 HOURS AGO

Adam Flagler is back with the Bears, returning to Baylor for the 2022-23 season after withdrawing from the 2022 NBA
WACO, TX・4 HOURS AGO
Sportsnaut

The Miami Heat are attempting to take a 3-1 series lead on the road in Game 4 of their Eastern
BOSTON, MA・1 DAY AGO

Bookmark. Save. Favorite. Do your thing. This is the one-stop-shop for everything NBA schedule-related heading into the 2021-22 season: Related:
NBA・12 HOURS AGO
Sportsnaut

Few players have put themselves on the map like Jalen Brunson has for the Dallas Mavericks during their playoff run.
DALLAS, TX・2 DAYS AGO

Indianapolis Colts cornerback Kenny Moore is unhappy with his contract and not participating in OTA practices, the Indianapolis Star reported
INDIANAPOLIS, IN・3 HOURS AGO
Sportsnaut

Steve Kerr sat down at his pregame press conference Tuesday and was quite clear with the assembled media. There would
UVALDE, TX・18 HOURS AGO
Sportsnaut

Luka Doncic and the Dallas Mavericks are up against it in their Western Conference Finals series against the Golden State
DALLAS, TX・1 DAY AGO
Sportsnaut

The 2022 Detroit Pistons draft includes the No. 5 overall pick in the first round. Fresh off another disappointing season,
DETROIT, MI・1 DAY AGO

Before his first days of practice with the Miami Dolphins, Tyreek Hill did not expect to see high-level talent in
MIAMI, FL・8 HOURS AGO
Sportsnaut

If you’re looking for information on all the college football games today, including where to watch them, TV schedule information,
NFL・10 HOURS AGO
Sportsnaut

Paolo Banchero, one of the premier prospects in the 2022 NBA Draft, lived up to the hype in his lone
NBA・6 HOURS AGO