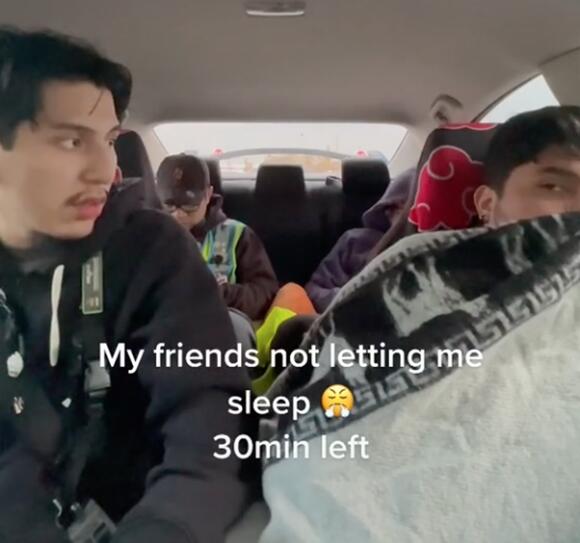 An Amazon worker who posted a viral Tiktok of himself racing to eat and sleep in a 90-minute break between shifts says he often goes without food at work.

J Lozada showed his rushed routine while preparing for a second shift at an Amazon warehouse in New Jersey in the nine-second clip that has attracted nearly 200,00 views since it was posted on Wednesday.

It shows him taking a “far walk” to punch out of his first shift before eating a meal of pasta and sauce he had prepared the night before, and catching a few minutes of sleep in a co-worker’s car.

J Lozada, 23, has posted a series of Tiktoks titled “When working at Amazon” that have reignited criticism of working conditions at the digital retail and delivery mega company.

In other posts he suggests he only had a 30-minute break between shifts, which gave him barely enough time to purchase a sandwich.

“‘Im jealous of getting a break,” wrote one person in the comments section.

I was a engineer at a major hospital...most times when snow was coming in we were called in 4 to 6 hours before our regular shift for plowing and salting detail ,then do our regular 8 hour shift,,then many times stay late cause of weather....we never complained,,we gladly expected the extra pay and make a extra few hundred dollars in two days.

I don't believe it. If true he signed up for VET because our FC only allows you to work 12 hours a day, sixty hours a week max. People love to be dramatic and you only work 4 days

Walking at a brisk pace for just 75 minutes every week could cut your risk of depression, a new study finds. The World Health Organization recommends everyone should exercise for at least two-and-a-half hours every seven days. But researchers at Cambridge University, England, found adults who got half as much...
FITNESS・27 DAYS AGO
KNX 1070 News Radio

A Dollar Tree manager in Bremen, Indiana was fired from their job after posting a controversial sign outside of the store last week. The sign apologized for the store being closed, and then called out the teenage workers at the store.
BREMEN, IN・27 DAYS AGO
Shreveport Magazine

According to the boy’s mothers, a teacher at the charter school decided to cut their son’s hair while he was in distress, instead of calling them for help. Now, the mothers claim that this will not go unnoticed until everyone is held accountable. The boy’s parents were reportedly upset that the teacher didn’t find a more effective way to help their son aside from cutting his hair. The boy’s mothers also said that their son was proud of the afro he was growing. “What made her think that this is OK? if you were going to help my child why wouldn’t you do it the proper way, common sense way, the helpful way? By getting him some real help?” one of the mothers said.
MINNESOTA STATE・26 DAYS AGO
Upworthy

A new trend in treasure hunting called magnet fishing has blown up over the past two years, evidenced by an explosion of YouTube channels covering the hobby. Magnet fishing is a pretty simple activity. Hobbyists attach high-powered magnets to strong ropes, drop them into waterways and see what they attract.
HOBBIES・27 DAYS AGO

Megan Fox wants her kids to express themselves however they please. In a wide-ranging interview with Glamour U.K. for their April cover story, the 35-year-old actress opens up about how she teaches her children, Journey River, 5, Bodhi Ransom, 8, and Noah Shannon, 9, about gender identity and encourages them to be confident in who they are.
FAMILY RELATIONSHIPS・26 DAYS AGO
The US Sun

WHEN little Rio Fowler started to vomit and suffer with diarrhoea, his parents feared he'd been struck by a tummy bug. Mum Karen and dad Ryan said their daughter who was in pre-school had gastro so thought he had caught it off her. The 15-month-old had to be taken to...
KIDS・26 DAYS AGO

Elon Musk, the world’s wealthiest man, who thinks tunnels are immune to natural disasters, is purchasing Twitter. The company confirmed on Monday afternoon that it had accepted the billionaire’s offer. “Twitter, Inc. today announced that it has entered into a definitive agreement to be acquired by an entity wholly owned by Elon Musk, for $54.20 per share in cash in a transaction valued at approximately $44 billion,” reads the official press release. “Upon completion of the transaction, Twitter will become a privately held company.”
BUSINESS・27 DAYS AGO
The US Sun

CRAMMING your belongings into a suitcase is no easy feat – and there’s a trio of troublesome items you should never pack. This frugal flight attendant has revealed the secrets to making the most of your luggage space and what to avoid bringing on your trip. Miguel Muñoz...
LIFESTYLE・2 DAYS AGO
The Independent

A woman has revealed several “red flags” that she found in the apartment of the man she’s dating, which included two books about pregnancy and a woman’s ring.In a recent video shared to TikTok, Devin, @discoveringdevin, filmed herself sitting on a bed and putting her thumb down, as the text reads: “Red flags in his apartment.”She then began by showing four Apple MacBooks, all placed on top of each other, on a desk. “Four laptops…what are you hiding?” Devin wrote in the text over the clip.Next, she documented what appeared to be a “girl’s ring” on a white shelf....
RELATIONSHIP ADVICE・27 DAYS AGO
Newsweek

Depp said he discovered Disney would not recast him in "Pirates" days after Amber Heard's Washington Post op-ed article was published.
FAIRFAX, VA・27 DAYS AGO
Insider

From the gourmet meals and missions to the VIP perks and room with a droid, here's what the galactic experience was like — and why we'd do it again.
LIFESTYLE・27 DAYS AGO
PopCrush

Last month it was revealed that Sharon Osbourne would be returning to television, partnered with Piers Morgan on a new U.K. series named The Talk. This comes nearly a year after Osbourne was suspended and eventually exited the U.S. talk show The Talk after expressing her support for Morgan in an intense discussion over race with co-host Sheryl Underwood. Now, in a new interview with the U.K.'s Sunday Times, Osbourne reveals how cancel culture impacted her as she eventually parted ways with her longtime daytime talk series amidst public backlash.
CELEBRITIES・27 DAYS AGO
Entrepreneur

Dorsey, who was CEO of the company until November 2021, took to the platform to pen his thoughts on the new changes.
BUSINESS・26 DAYS AGO
The Independent

Scientists have raised alarm over an invasive and aggressive species of worms that are native to Asia and can jump a foot off the ground after they were spotted on the west coast of the United States.The Asian jumping worm, also known as crazy snake worms, Alabama jumpers and Jersey wrigglers is a type of earthworm native to Japan and the Korean Peninsula, which arrived in North America with imported plants.The Amynthas agrestis was first spotted in the US in 2013 in Wisconsin and later across the New England region. In California, these worms were first seen in July 2021...
CALIFORNIA STATE・2 DAYS AGO
SheKnows

Click here to read the full article. Khloé Kardashian’s perfectly curated kitchen pantry (read: grocery store) is a slice of organized, structured Heaven that puts even the best kitchen storage solutions to shame. And if you’ve ever caught a glimpse of her color-coordinated fridge (and her urge to keep everything super neat and tidy inside it), the immaculate state of her pantry really should come as no surprise. Luckily for us, we can recreate some of the organizational magic with Aldi’s new glass storage containers. View this post on Instagram A post shared by Aldi Connoisseur 🌈 (@aldi.is.my.jam) Aldi fan account,...
CELEBRITIES・26 DAYS AGO
Newsweek

"The server refuses to give me another drink because he says we are sharing drinks and [they are] watching our table like we are little kids," the man said.
FOOD & DRINKS・26 DAYS AGO
Newsweek

"This is very concerning," wrote one commenter. "It's so much bigger than mac and cheese."
INTERNET・26 DAYS AGO