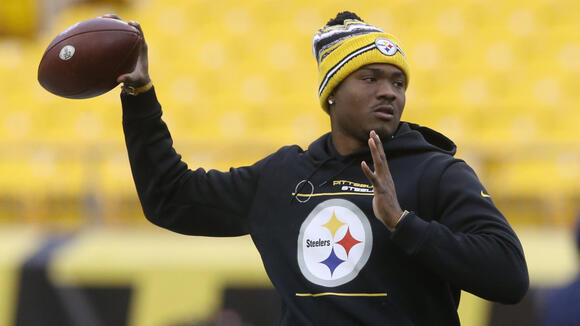 The Pittsburgh Steelers will have a quarterback competition on their hands for the first time in nearly two decades, and head coach Mike Tomlin expects former Ohio State signal-caller Dwayne Haskins to battle Mason Rudolph this offseason for the right to be Ben Roethlisberger’s immediate successor.

“Both guys have had their moments, but they’ll have to prove that, not only in the team development process, but through playing itself,” Tomlin said during his media availability this week. “They are guys that started – I wouldn’t characterize them as everyday starters – and so they’ll be given an opportunity to establish themselves.

“There’s going to be a competition. There always is, but I think both guys have positioned themselves to fight that fight with what they’ve done from a work standpoint and a professionalism standpoint in 2021.”

A former first-round pick of the Washington Football Team in the 2019 NFL Draft, Haskins threw for 2,804 yards and 12 touchdowns with 14 interceptions in 16 games (13 starts) over two seasons with the franchise. He was released in December 2020 due to off-field issues but quickly latched on with the Steelers.

Haskins did not play a single down this season, but was reportedly asked to mimic Kansas City Chiefs quarterback Patrick Mahomes and Green Bay Packers quarterback Aaron Rodgers as Pittsburgh’s scout team quarterback. He also had the opportunity to learn from Roethlisberger, one of the NFL’s all-time great passers.

“Having to play early (in Washington), I never had a chance to learn the NFL game the way it should be done and the way the Steelers wanted done,” Haskins said on Wednesday. “It gave me an opportunity to understand the ‘Steelers Way’ and how they wanted their quarterbacks to operate.

“I definitely feel like I can be a starter in this league. I got drafted for that reason. I really believe I have the talent. I believe I can play with the best of them. I really just haven't put it all together yet, and I know I have to do that if I want to put myself in a position to play."

The Steelers are the most dedicated franchise in any sports, They stick with their decisions allow them to materliaze no matter how long it takes, that's what I admire about their organization Mike is not going no where

Neither Rudolph or Haskins are qualified to lead the team to victory. It is time to get rid of Tomlin and recruit a star quarterback!