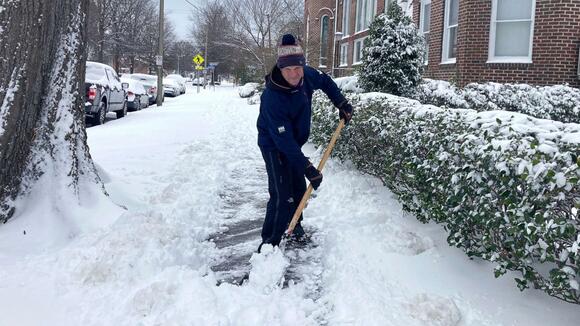 The southeastern United States is weathering snow and ice yet again a week after the region was slammed with hazardous winter conditions.

Two to 4.5 inches of snow have been reported from South Carolina to east Virginia, as winter weather alerts were in effect Saturday morning from Georgia to Maryland as the storm moved out of the region.

Cold temperatures throughout the weekend will continue to make for hazardous road conditions.

In North Carolina, Gov. Roy Cooper urged people to stay at home due to dangerous road conditions and widespread power outages. The governor had issued a state of emergency ahead of the winter storm.

North Carolina Highway Patrol troopers had responded to more than 1,500 calls for service and 945 collisions in affected areas since Friday afternoon, the governor's office said midday Saturday. Most were related to cars sliding off the roadway and becoming stuck or single-car collisions, the office said.

"With limited improvement and lows plummeting into the teens Saturday night, black ice will become a large hazard for the eastern half of the state," North Carolina Emergency Management said . "Additional melting is expected Sunday, but below normal temperatures [will] keep the potential for black ice into early next week."

MORE: How to stay safe in the cold

Runways were also impacted by sleet and snow. At Raleigh-Durham International Airport, a Delta flight arriving from Washington, D.C., Friday night was taxiing off the runway when it slid into mud around 9 p.m. local time, airport officials said. There were no reported injuries, and the airfield reopened shortly following snow removal at an alternate runway.

Authorities in South Carolina and Virginia also urged drivers to avoid impacted areas due to snow and ice conditions.

What the heck! Hogging all of our snow.... well - we have plenty of shovels here in southeast Michigan we haven't needed this year - we can send them your way.

People drive super slow in the midwest when the first snow hits. It must be a turtles pace in the south. Stay home if you can.

I live on a 109-acre horse farm in York County, South Carolina. I do not own but a few of those acres, don’t get me wrong, but the surrounding property is quite large and owned by a friend of mine so I have access to the whole thing. Over the years I have lived there I have really grown fond of privacy.
YORK COUNTY, SC・29 DAYS AGO
Newsweek

Troy Staggs found himself in a 47-minute long battle with the huge fish, which measured 4.6 feet and weighed around 55 pounds.
MISSOURI STATE・29 DAYS AGO