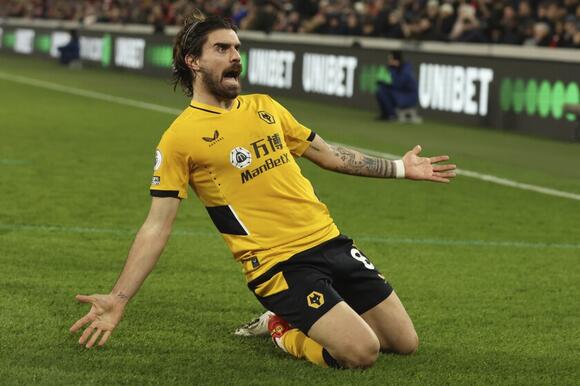 Ruben Neves scored a late goal to give Wolverhampton a 2-1 victory over Brentford in a Premier League game interrupted for almost 20 minutes because of a drone that hovered above the field on Saturday.

Ivan Toney's volley in the 71st minute offset João Moutinho's goal for Wolves three minutes into the second half. Moutinho then laid a pass off to Neves, who fired a shot from just outside the box into the bottom right corner in the 78th.

Wolves' third consecutive league win keeps them in contention for a European spot. The club is in eighth place with an attack coming to life after a 3-1 win over Southampton a week ago. They've scored 19 goals — third worst in the league — but are second-best in goals conceded, with 16.

Adama Traore's goal for Wolves in second-half stoppage time was ruled out for offside after a VAR review.

Frustration is showing for 14th-place Brentford, which lost its fourth consecutive league game. Manager Thomas Frank was shown a red card after the final whistle after he exchanged words with Wolves players and the referee.

In the 34th minute, the players were instructed to return to their locker rooms because of a drone hovering above the field at Brentford Community Stadium in west London.

The teams re-emerged and briefly warmed up before play resumed with 19 minutes remaining in the first half, which ended 71 minutes after the match had started.

There had already been a long stoppage in play following a sickening clash of heads between Brentford teammates Mathias Jensen and Rico Henry, which left both bleeding heavily. They were both replaced by concussion substitutes.