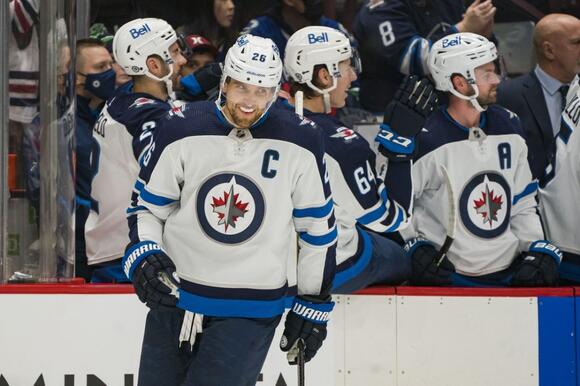 Wheeler, 35, had been on LTIR since Dec. 19 after sustaining a lower-body injury on Dec. 10 against the Vancouver Canucks.

Fellow forward Nikolaj Ehlers took Wheeler’s place on LTIR, however, due to a knee injury suffered in a collision on Tuesday with Washington Capitals defenseman Dmitry Orlov. The NHL suspended Orlov two games.

The NHL season officially started back on October 12. In this article, we track all the NHL games today as
NHL・7 HOURS AGO
Sportsnaut

Avs out to cure second-round woes vs. Blues

The Colorado Avalanche have breezed through the first round of the Stanley Cup playoffs four straight years, but the second
DENVER, CO・21 HOURS AGO
Sportsnaut

They posted the best records in their respective conferences during the regular season. With one round now complete in the
SUNRISE, FL・16 HOURS AGO

The NHL on Sunday fined defensemen Charlie McAvoy of the Boston Bruins and Brendan Smith of the Carolina Hurricanes for
RALEIGH, NC・1 DAY AGO
Sportsnaut

Toronto Maple Leafs star Mitch Marner was the victim of an apparent carjacking at gunpoint on Monday night. The Toronto
PUBLIC SAFETY・5 HOURS AGO
Sportsnaut

The Detroit Lions are in a huge rebuild, but how many games on their 2021 schedule are realistically winnable? Check out our projected record for the Lions.
DETROIT, MI・11 HOURS AGO