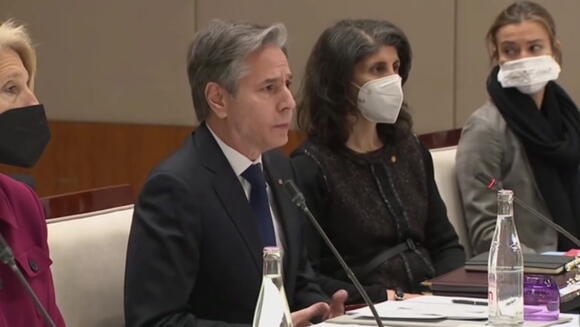 The US Embassy in Kyiv has requested that the State Department authorise the departure of all nonessential personnel and their families, reports say.

Citing multiple sources familiar with the matter, CNN says that the departures could start soon, with an announcement coming in just days. Bloomberg published a similar report.

A State Department spokesperson told CNN that there is “nothing to announce at this time,” adding that rigorous contingency planning is conducted as always in the event the security situation deteriorates.

A source close to the Ukrainian government says that Kyiv has been informed and that evacuations of diplomatic families could begin next week, the network reports.

The same source said that President Volodymyr Zelensky told US Secretary of State Antony Blinken that such a step would be an “overreaction”.

Some 180 Americans are employed by the embassy— a figure that does not include family members.

Mr Blinken was in Kyiv this week where he addressed embassy staff and confirmed $200m in security aid to Ukraine in light of the more than 127,000 Russian troops deployed in the region.

The massing of Russian forces has dramatically raised the fear that an invasion or incursion may be increasingly likely. The New York Times reported earlier this month that Russia has already evacuated family members and some staff from its diplomatic missions in Ukraine.

Earlier CNN reporting said that contingency plans were being drawn up to evacuate Americans from Ukraine.

The country is already under the highest level of State Department travel advisory and Americans have been told not to travel there.

A State Department official says that decisions about overseas staff are based solely on the safety and security of Americans.

“If there is a decision to change our posture with respect to American diplomats and their families, American citizens should not anticipate that there will be US government-sponsored evacuations. Currently, commercial flights are available to support departures,” the official told CNN.

There is no certainty that Russian President Vladimir Putin plans to invade, but the continuing build-up of Russian troops, most recently moving units into Belarus, is particularly worrisome.

President Joe Biden has ramped up his rhetoric to urge President Putin not to invade.

Mr Biden initially said at a press conference on Wednesday: “It’s one thing if it’s a minor incursion and we end up having to fight about what to do and what to not do, etcetera.”

He later clarified that “if any, any assembled Russian units move across the Ukrainian border, that is an invasion,” which would be met with “severe economic response”.

Mr Blinken mooted the possibility of a summit between the US and Russian leaders: “If it proves useful and productive for the two presidents to meet, to talk, to engage, to try to carry things forward, I think we’re fully prepared to do that.”

Maria Vorontsova allegedly took part in discussions on Telegram, according to an unconfirmed report by Dmitry Kolezev, editor-in-chief of the website Republic.
POLITICS・1 DAY AGO
Business Insider

The Kremlin has refused to acknowledge its death toll in Ukraine, though a spokesperson admitted that Russia suffered "significant losses."
MILITARY・25 DAYS AGO
The Independent

Vladimir Putin is so popular in Russia that he has the “political space” to withdraw his forces from Ukraine, said Boris Johnson.The prime minister said the Russian president still has “massive backing” from his own people despite international outrage over the invasion.“The Russian public overwhelming back Putin,” Mr Johnson told Talk TV. “Therefore he has the political margin for manoeuvre from within Russia … Putin has far more political space to back down, to withdraw.”The PM added: “There could come a point when he could say to the Russian people, ‘The military-technical operation that we launched in Ukraine has...
POLITICS・23 DAYS AGO
americanmilitarynews.com

Vladimir Putin's hand appears to tremble before he greets another man, which has sparked further concern over the Russian leader's health.
WORLD・25 DAYS AGO
WashingtonExaminer

When President Joe Biden named Kamala Harris as his running mate, he promised his former campaign rival would be one of the most influential voices in the White House.
PRESIDENTIAL ELECTION・25 DAYS AGO
Newsweek

With a key Senate primary still in the balance, Donald Trump is again casting doubt on election integrity without offering any evidence.
PENNSYLVANIA STATE・2 DAYS AGO

Sign up for the Fortune Features email list so you don’t miss our biggest features, exclusive interviews, and investigations. Two Russian oligarchs found dead alongside their families within 48 hours of each other are the latest high-profile executives to die in mysterious circumstances since the beginning of the year.
PUBLIC SAFETY・25 DAYS AGO
Newsweek

Russia's foreign minister, Sergei Lavrov, said "there can be no winners in a nuclear war."
POLITICS・24 DAYS AGO
Business Insider

Greene testified on Friday that she didn't recall whether she asked Trump to invoke military rule, despite telling Meadows to relay the idea to Trump.
ATLANTA, GA・25 DAYS AGO
Fox News

EXCLUSIVE: A group of Republican senators is introducing legislation to block the Biden administration from sending personnel and funding from the Department of Veterans Affairs (VA) to alleviate the crisis at the southern border. The senators are alarmed by the Biden administration's announced termination of Title 42 on May 23,...
CONGRESS & COURTS・24 DAYS AGO

Rep. Marjorie Taylor Greene (R-GA) speaks to supporters of former U.S. President Donald Trump at the Banks County Dragway on March 26, 2022 in Commerce, Georgia. This event is a part of Trump's Save America Tour around the United States. (Megan Varner/Getty Images) On Monday, CNN's Andrew Kaczynski and Em...
COMMERCE, GA・24 DAYS AGO
The Independent

Despite outcry from their elected officials in recent days, nearly half of Republican voters believe that the United States should provide baby formula to non-citizens at the country’s southern border. Republican lawmakers and right wing pundits have lashed out at President Joe Biden this week for continuing to provide formula to babies coming to the country with their families amid a nationwide shortage, with several conservative leaders referencing the alleged prioritization of “illegal babies” and “illegal mothers.” GOP voters, however, are not exactly rallying around the nativist attacks on migrant mothers and their babies. A new poll from YouGov conducted...
U.S. POLITICS・1 DAY AGO
The Independent

Defeated Pennsylvania Senate candidate Kathy Barnette has placed blame for her third-place finish in Tuesday’s Republican primary squarely on the shoulders of Fox News host Sean Hannity. In a video posted to her Twitter account early on Wednesday morning, Ms Barnette thanked her supporters, but pivoted to attacking the Fox commentator.“I do want to say: never forget what Sean Hannity did in this race. Almost single-handedly, Sean Hannity sowed seeds of disinformation, flat-out lies every night for the past five days. And that was just extremely hard to overcome, apparently”.Ms Barnette’s grievance with Hannity stems from his decision to...
PENNSYLVANIA STATE・2 DAYS AGO
Newsweek

Patricia Arquette has angrily confronted Elon Musk after he revealed his plans to vote Republican.Writing on Twitter earlier today (18 May), Musk explained that he has switched allegiance from Democrat as they have become a party of “division and hate”.He wrote: “In the past I voted Democrat, because they were (mostly) the kindness party. But they have become the party of division & hate, so I can no longer support them and will vote Republican. Now, watch their dirty tricks campaign against me unfold.”To this statement actor Arquette responded: “You say this with a straight face as Republicans roll...
CELEBRITIES・2 DAYS AGO
USA TODAY

US, allies hustling to save Ukraine; Rand Paul says US push to get Ukraine into NATO provoked invasion: April 26 recap