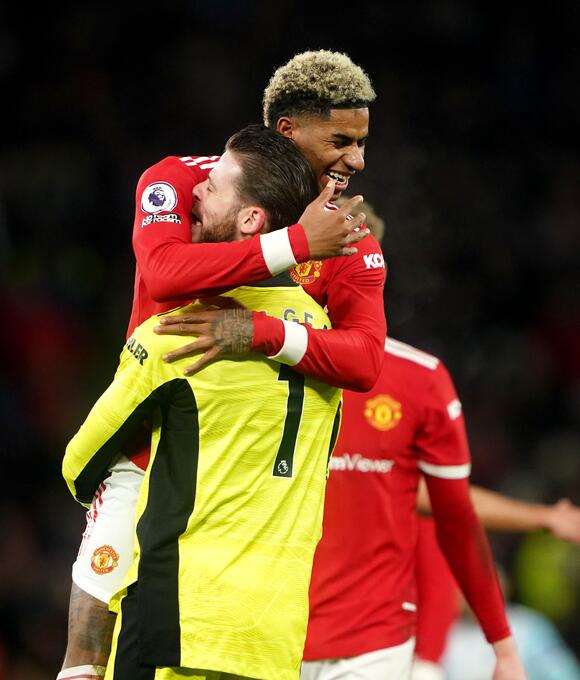 In the Carabao Cup earlier in the season David Moyes led the Hammers to their first win at the Red Devils since 2007 and he looked set to leave with a potentially vital point in the race for Champions League qualification.

But United dug deep and secured victory with virtually the last kick of the game as Edinson Cavani crossed for fellow substitute Rashford to score in front of a rocking Stretford End to seal a 1-0 win.

It was a memorable end to what looked set to end in a drab goalless draw between two sides that failed to muster a shot on target between them in the first half.

Cristiano Ronaldo went close to connecting a with a fine cross and saw penalty appeals ignored in that opening period, with Ralf Rangnick throwing caution to the wind with his late attacking substitutions.

West Ham nearly capitalised as they pushed top-heavy United, only for the stars to align as Rashford turned home.

After a video assistant referee review for offside, the goal was awarded as Rangnick celebrated consecutive wins for the first time in charge.

Gareth Southgate says it is an “embarrassment” that England are playing a home game behind closed doors, as he reminded supporters that their behaviour is a representation of their country, warning that nobody wants to go back to the dark days of fences.The national side are being forced to play Italy in front of empty Molineux stands for the Nations League match on 11 June, as a consequence of the chaos at Wembley for the Euro 2020 final against the same country. Reflecting on whether that match marked the start of a post-pandemic period that has seen a release...
UEFA・3 HOURS AGO