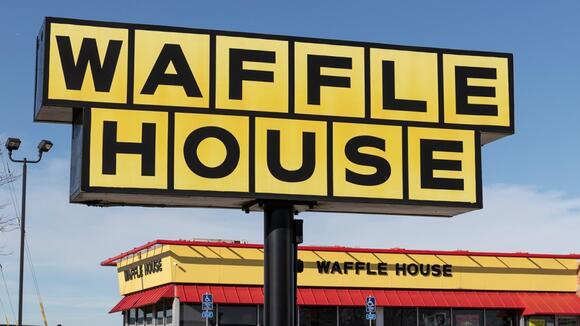 Regular customers at Waffle House are well-versed in the various phrases and lingo the servers sling back and forth with the kitchen. (Ever order your hash browns smothered, covered or chunked?) But even the most seasoned Waffle House patrons are likely unfamiliar with the intricacies of the chain’s plate-marking system, used by the grill operators to keep track of your orders.

This not-so-secret system — basically a type of shorthand using plates, condiment packets, utensils and pieces of food — was recently brought to the attention of TikTok by one of the restaurant’s cooks, eliciting equal parts awe and utter confusion from viewers. But for Waffle House’s long-time grill operators, the marking system is apparently second nature.

“Yes, it’s really a thing, and while it’s secret like the Coca-Cola recipe, we hide it in plain sight,” said Njeri Boss, the director of public relations at Waffle House, in a statement shared with Nexstar.

Anti-abortion protesters optimistic at March for Life in DC

Njeri further confirmed that all Waffle House grill operators are trained to “mark” plates as soon as the orders are relayed from the servers. This way, they won’t need to rely solely on memory — or a more traditional ticket — when plating the orders.

“There really isn’t a better system than what we do,” Boss told Nexstsar. “It’s fast. It’s quite easy to learn.”

The casual onlooker, however, might not be so quick to agree.

As revealed by numerous employees across social media , Waffle House’s grill operators are instructed to strategically place condiments or ingredients (jelly packets, butter packets, bits of shredded potato, etc.) on each plate as the order is called. The position and orientation of each item indicates what was ordered and how it should be prepared.

For instance, a jelly packet placed vertically at the bottom of a plate means the customer wants scrambled eggs. The same packet, placed at the top of the plate, means the eggs should be cooked sunny-side up. And it only gets more confusing from there.

Some of the other markings, as discussed in a Waffle House training video, are explained as follows. (By no means is this an exhaustive list.)

Boss said the system was first developed by Waffle House’s cooks in the early days of the restaurant, but evolved over the years as the menu grew.

“Back in the day, our gill operators cooked from memory. And over time, a few of them here and there would create their own little [plate markings],” she said. “Now it’s a system that’s taught.”

Back on TikTok, many commenters questioned why the chain didn’t simply use tickets, or why the system is “so complicated.”

“I worked at Waffle House for [three] years and this … was like another language to learn,” wrote one user.

Others simply expressed amazement that Waffle House’s grill operators could even keep track of the system, especially during the restaurants’ busiest hours.

“They have to fully memorize the periodic table of breakfast,” one user joked.

An unusual donation was found at a local charity last week.
GIRARD, OH・2 DAYS AGO
WKBN

A suspect not only bought cigarettes and got cash with play money, but he also won the lottery with his ill-gotten gains.
BOARDMAN, OH・1 DAY AGO
Newsweek

"The server refuses to give me another drink because he says we are sharing drinks and [they are] watching our table like we are little kids," the man said.
FOOD & DRINKS・24 DAYS AGO

At the new Sake Japanese Fusion restaurant at Summit Mall in Fairlawn, a cute little robot host named Peanut with a blue shirt and hat works in tandem with a human host, welcoming diners and showing them to their seats. "Welcome to Sake Japanese Fusion," Peanut says. After leading guests to their tables, he says: "Destination has arrived. Enjoy your meal." ...
FAIRLAWN, OH・56 MINUTES AGO
Upworthy

A new trend in treasure hunting called magnet fishing has blown up over the past two years, evidenced by an explosion of YouTube channels covering the hobby. Magnet fishing is a pretty simple activity. Hobbyists attach high-powered magnets to strong ropes, drop them into waterways and see what they attract.
HOBBIES・25 DAYS AGO
Insider

Brandon Valdez and his groomsmen were stuck in an elevator at the Best Western Clovis Cole in Fresno, California, for more than one hour.
FRESNO, CA・1 DAY AGO
WKBN

No one was hurt in the shooting on Dunstan Drive Tuesday morning.
WARREN, OH・2 DAYS AGO

Whether you frequent an upscale salon or a local barber shop, you might feel uncertain about how much to tip – and it’s no wonder. Tipping can feel arbitrary, and you might be unsure about your understanding of tipping etiquette. For instance, are there hard and fast rules around tipping, or is it up to your discretion? Is there a going rate? Do barbers and stylists expect a certain percentage? Is cash best? Do you tip salon assistants?
SCOTTSDALE, AZ・24 DAYS AGO
SheKnows

Click here to read the full article. Khloé Kardashian’s perfectly curated kitchen pantry (read: grocery store) is a slice of organized, structured Heaven that puts even the best kitchen storage solutions to shame. And if you’ve ever caught a glimpse of her color-coordinated fridge (and her urge to keep everything super neat and tidy inside it), the immaculate state of her pantry really should come as no surprise. Luckily for us, we can recreate some of the organizational magic with Aldi’s new glass storage containers. View this post on Instagram A post shared by Aldi Connoisseur 🌈 (@aldi.is.my.jam) Aldi fan account,...
CELEBRITIES・24 DAYS AGO
Newsweek

"Their house their rules. Don't like it? Move out and let your brother & his family live in peace," one commenter wrote.
FAMILY RELATIONSHIPS・24 DAYS AGO
WKBN

Detectives in Warren recovered thousands of dollars in cash and several suspected drugs from a house on the southeast side of the city.
WARREN, OH・1 DAY AGO

The man accused of assaulting two women at the Bazetta Walmart appeared in court Wednesday. Prosecutors said the man now facing charges in connection to the ordeal was on parole for an aggravated robbery case and was also convicted of gun charges in North Carolina.
MERCER COUNTY, PA・2 DAYS AGO
Aabha Gopan

Being single is frowned upon even today. In fact, a study conducted by Match found that 52 percent of the 1000 people surveyed experienced single-shaming. It also shared that the common shaming phrases were “you’ll find someone soon” and “you must be so lonely”.
1 DAY AGO
WKBN

A jury in Mahoning County Common Pleas Court Thursday found a man guilty of attempted murder for a 2020 shooting on the East Side.
YOUNGSTOWN, OH・1 DAY AGO
WKBN

According to a criminal complaint, Jacob Dominick, 18, was arrested on a warrant in Poland Township after it was discovered that he had sexual relations with the victim.
BOARDMAN, OH・1 DAY AGO
WKBN

A Youngstown man received a four- to six-year prison sentence Wednesday as part of a plea deal for sending inappropriate messages to a teen girl.
YOUNGSTOWN, OH・1 DAY AGO
WKBN

Akron police arrested a suspect in the robbery of the Key Bank on West Market Street on Friday.
AKRON, OH・1 DAY AGO
WKBN

Judge denies bond to defendants in West Side murder case

udge John Durkin said after a hearing that part of the reason for his decision was that testimony from the lead investigator in the case showed that the gun that killed Joseph Addison, 42, was an AR-15 semiautomatic rifle.
MAHONING COUNTY, OH・1 DAY AGO
WKBN

‘Everyone has the right to be stupid’: Broome County DA Press Conference on Buffalo Shooting

The Broome County District Attorney, Michael Korchak will be holding a press conference at 1:30 PM today to discuss some of the previous history of the man that is charged in the Buffalo Tops mass shooting.
BROOME COUNTY, NY・2 DAYS AGO