Billy Donovan on Grayson Allen's ‘Dangerous‘ Foul: ‘He Has a History of This‘ 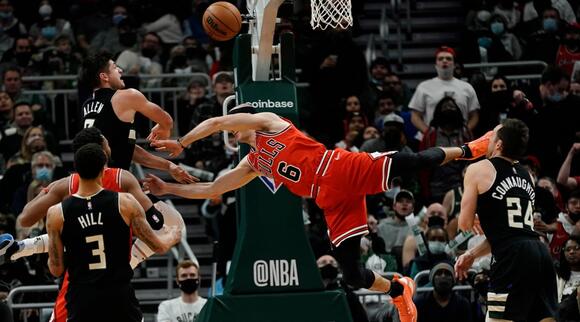 Allen was ejected in the third quarter for his flagrant foul on Alex Caruso.

Allen was ejected in the third quarter of the Bulls 94–90 loss to the Bucks after throwing Caruso to the ground during a fast-break opportunity. Caruso's head appeared to bounce off the ground

While Caruso said he only came away with a knock to his wrist, the Bulls announced Saturday that Caruso suffered a fractured wrist that will require surgery, which will keep him out for six to eight weeks.

On Friday, Donovan said the NBA should look further into the foul due to its dangerous nature.

“To do that to a player is just really wrong,” Donovan said in his postgame press conference, per NBC 5 Chicago. “You could’ve really jeopardized his career in a lot of ways. I don’t know what his response will be to it.

“Maybe he didn’t mean to do it. I don’t know. I just know the play looked really, really bad on a guy that has a history of doing that all the way back into college. I hope the league takes a hard look at something like that. Because God forbid this guy was in a stretcher going out of the building right now. That would not be good.”

While it was his first NBA ejection, Allen was ejected from a Summer League game in May and has received a flagrant foul in the past.

Meanwhile, he also has a history of tripping players and other off-ball activities, including his infamous hip-check against rival UNC while at Duke in 2019.

“For Alex to be in the air like that and for him to take him down like that, you could’ve ended his career,” Donovan said. "And [Allen] has a history of this. And that, to me, was really dangerous. I really hope the league takes a hard at something like that because they could’ve really seriously hurt him.

“... For it to even be extended to a flagrant-2 and be thrown out of the game, clearly the officials must’ve felt there was some intent there the way [Allen] yanked him and snapped him to the floor and [Caruso’s] head bounced off the floor. So a really, really dangerous play.”

Ja Morant is a fan of Steph's "goodnight" celebration against the Dallas Mavericks
DALLAS, TX・14 HOURS AGO
Sports Illustrated

The guard will only play for the Jayhwaks in his senior season if he withdraws from the 2022 NBA draft.
KANSAS STATE・1 DAY AGO
Sports Illustrated

Green: ‘When you play Luka, you [Patrick Beverley] are a cone, too.’
NBA・2 DAYS AGO

The Lakers’ star doesn’t even hold back when playing against his son.
LOS ANGELES, CA・2 DAYS AGO
Sports Illustrated

The UCF coach had little to say about his former rival coaches.
AUBURN, AL・1 DAY AGO
SPORTbible

Tiger Woods struggled to keep a calm head at the PGA Championships, losing his cool in an altercation with a cameraman. The golf legend didn’t have the best of starts on the opening day, stumbling to a 74 which is his worst start to a PGA since 2015. Woods...
GOLF・1 DAY AGO
Sports Illustrated

The Alabama coach claims Texas A&M ‘bought every player on their team.’
NFL・2 DAYS AGO

The Alabama coach: "There’s nothing illegal about doing this. It’s the system. That’s the issue I have."
COLLEGE SPORTS・1 DAY AGO
Sports Illustrated

The record stood for 57 years before Gary Martin broke it on Monday.
PENNSYLVANIA STATE・2 DAYS AGO
Sports Illustrated

As both franchises enter a period of transition this summer, team executives have reportedly met at the NBA Combine.
LOS ANGELES, CA・54 MINUTES AGO

The Warriors forward draws a lot of similarities between the 23-year-old and LeBron James.
NBA・23 HOURS AGO
Sports Illustrated

Two former head coaches and a high-level assistant are up for the position.
LOS ANGELES, CA・21 HOURS AGO
Sports Illustrated

The Lakers’ star took to Twitter to voice his opinion on a league-wide issue.
NBA・1 DAY AGO
Sports Illustrated

Bet on this four-leg, same-game parlay at SI Sportsbook for Game 2 of the Western Conference finals between the Mavericks and Warriors.
DALLAS, TX・1 DAY AGO
Sports Illustrated

The wide receiver said that he had to put himself and his family first while deciding to move on from Tennessee.
PHILADELPHIA, PA・3 HOURS AGO