Investing in well-established, time-tested companies has its benefits. For instance, these companies tend to be less volatile than the broader market thanks to their stable businesses and strong financial results.

But large corporations can provide excellent growth prospects too. Let's look at two monster stocks -- both of which are leaders in their fields and have historically demolished the market -- that could continue delivering excellent returns for years on end: HCA Healthcare (NYSE: HCA) and Intuitive Surgical (NASDAQ: ISRG) . 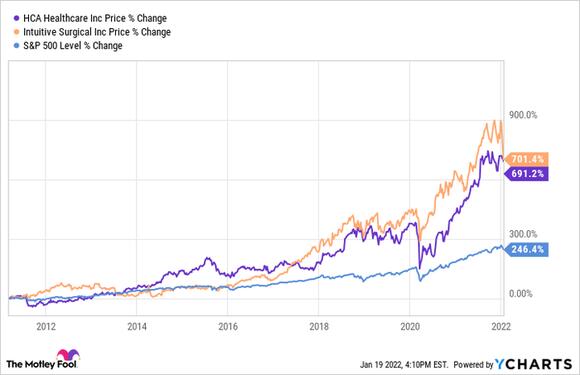 HCA Healthcare is one of the largest hospital chains in the U.S. The company owns a diverse portfolio of facilities, including acute care hospitals, surgery centers, psychiatric hospitals, and endoscopy centers. The company makes money based on occupancy levels in its facilities and the volume of services that physicians order for their patients.

That's why the pandemic has been a bit of a headwind for HCA. At the peak of the outbreak, healthcare facilities were busy taking care of COVID-19 patients, which led to a decrease in occupancy levels and the volume of services ordered for non-COVID patients. Last year, HCA somewhat rebounded from these woes even though the pandemic is still very much with us. 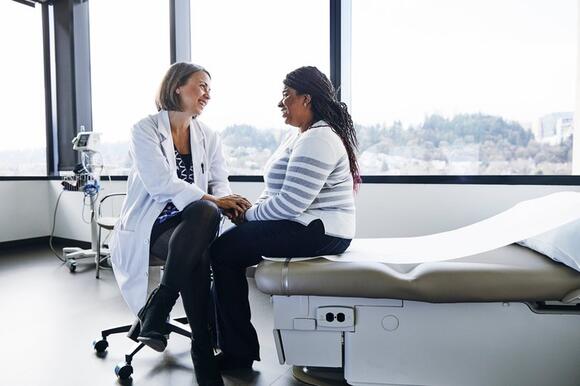 In the third quarter, the company's revenue rose 14.8% year over year to $15.3 billion. Meanwhile, net income increased to $2.3 billion, up from the $668 million in the year-ago period. To be fair, this substantial increase was largely due to gains HCA recorded on sales of facilities as opposed to actual business activities. So for a clearer picture, let's look at its adjusted earnings before interests, taxes, depreciation, and amortization ( EBITDA ). During the third quarter, HCA's adjusted EBITDA grew by 57% to $3.2 billion.

With the recent surge in cases due to omicron, some investors may worry about a repeat of what happened to HCA back in 2020. But even if this worst-case scenario comes to pass, it's essential to focus on the broader picture. According to the U.S. Centers for Disease Control and Prevention, adults aged 65 or older will make up 25% of the country's population by 2060, up from just 15% as of 2016. In other words, the aging of the U.S. population should provide a long-term tailwind to HCA's business.

People use a disproportionate amount of healthcare services during their golden years, which means demand for HCA's facilities and services will only increase. With an already strong position in the U.S., HCA Healthcare will benefit from this massive opportunity, which should work wonders for the company's financial results. That's why HCA Healthcare looks like such an excellent stock to buy today.

The market has high hopes for medical-devices specialist Intuitive Surgical. Not only has the healthcare giant performed much better than most in the past couple of decades -- largely thanks to its da Vinci Surgical system -- but it seems some of its future success is already baked into its stock price. The company's forward price-to-earnings ratio of 53.1 is much higher than the industry's average of 33.6.

Further, competition is heating up in the robotic-assisted surgery (RAS) market with well-established companies, such as Medtronic , Johnson & Johnson , and Stryker , joining in on the fun. Combined with the market's shift away from richly valued growth stocks, these factors may present some headwinds for Intuitive Surgical in the near term.

But for those willing to hold the company's shares for five or more years, these issues aren't as big as they seem. While it is true that Intuitive Surgical looks overvalued today, paying a premium seems fair for the opportunities this healthcare giant presents. 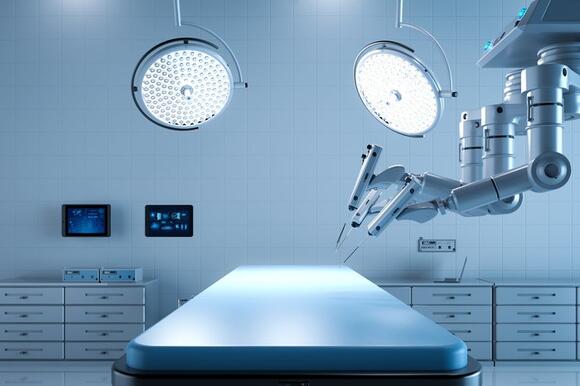 What are these opportunities? The RAS market remains severely underpenetrated. According to some estimates, only 3% of procedures worldwide are performed robotically. That's despite the fact that these machines allow surgeons to perform various minimally invasive procedures, which come with such advantages as less bleeding, shorter hospital stays, and faster recovery times. In other words, both patients and physicians benefit from them.

That's why the RAS market will continue on its upward trajectory, and Intuitive Surgical will likely remain a leader for many years to come. This is thanks to the competitive edges it has already built. These include high switching costs -- the da Vinci system is priced as much as $2.5 million -- and intangible assets such as patents and copyrights that protect its device from the competition. New entrants will have a difficult time catching up, and while some will unquestionably be successful, there is more than enough space in this market for several winners.

That's why investors shouldn't be too concerned with those companies looking to challenge Intuitive Surgical. In an industry with a solid, long-term tailwind coupled with market leadership and a solid moat, this monster healthcare stock is one on which investors can't go wrong.

10 stocks we like better than HCA Healthcare
When our award-winning analyst team has a stock tip, it can pay to listen. After all, the newsletter they have run for over a decade, Motley Fool Stock Advisor , has tripled the market.*

They just revealed what they believe are the ten best stocks for investors to buy right now... and HCA Healthcare wasn't one of them! That's right -- they think these 10 stocks are even better buys.

Deere stock has come down in price, and there are some headwinds worth monitoring.
STOCKS・21 HOURS AGO
The Motley Fool

These companies are set to ride secular growth trends.
MARKETS・17 HOURS AGO
The Motley Fool

Two of the legendary investor's recent purchases especially stand out.
STOCKS・1 DAY AGO

Market volatility can be alarming, but there are ways to protect your money.
STOCKS・21 HOURS AGO
The Motley Fool

These stocks appear positioned to maintain considerable growth levels for some time to come.
STOCKS・21 HOURS AGO
The Motley Fool

This REIT nears a quarter century of market-beating returns, and that could be just the start.
REAL ESTATE・2 DAYS AGO
The Motley Fool

Time is a great teacher.
STOCKS・23 HOURS AGO
The Motley Fool

Wednesday brought a recovery in the stock market, but investors are on edge waiting for news on monetary policy.
STOCKS・16 HOURS AGO
The Motley Fool

Adding shares of these market leaders should pay off big when the dust settles.
STOCKS・21 HOURS AGO