Is Biogen a Buy?

Over the past year, shares of Biogen (NASDAQ: BIIB) have dropped by 13.25% while the S&P 500 has climbed by 23.74%. The biotech's poor performance might come as a bit of a surprise since last year its Alzheimer's disease (AD) drug Aduhelm became the first medicine approved in the U.S. for the illness since 2003.

But this high-profile regulatory success hasn't been enough to help Biogen's stock, and some serious questions remain about the new medication. Do the company's recent woes represent a buying opportunity or should investors stay away? Let's look closer at what's going on with Biogen and decide whether it's worth purchasing its shares. 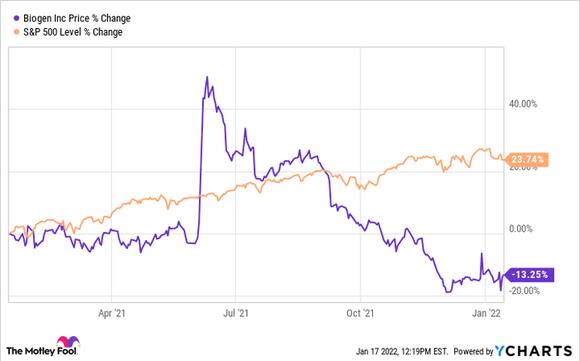 Aduhelm works by targeting the buildup of the beta-amyloid protein in the brain, which some experts believe is one of the underlying causes of AD. And while the therapy's approval was a notable achievement, it came with its share of bad publicity.

A panel of experts convened by the U.S. Food and Drug Administration (FDA) had voted against approving the drug on the grounds that the data did not fully support its efficacy. The agency decided to approve it anyway, but it has failed to live up to expectations so far.

During the third quarter, sales of Aduhelm came in at a meager $300,000, well short of the $14 million that analysts were expecting. 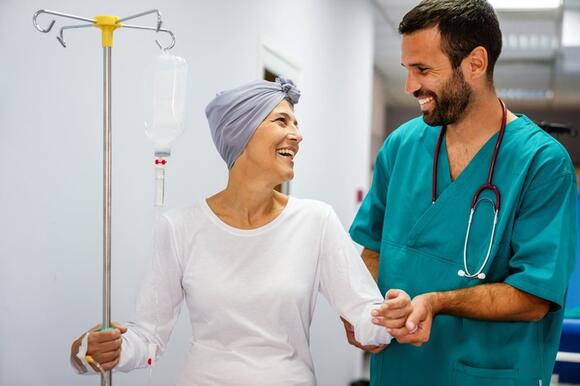 Right now, the future of this medicine looks challenging. The U.S. Centers for Medicare and Medicaid Services (CMS) recently announced a proposed plan under which Medicare would cover Aduhelm only for patients with mild cognitive impairment due to AD who are enrolled in CMS-approved clinical trials.

The final coverage decision will come down in April, but if it resembles this proposed plan, it will severely restrict access to Aduhelm, which costs a hefty $56,000 per year per patient.

Meanwhile, other companies are looking to enter the AD market, including Eli Lilly . Increased competition will only make things worse for Aduhelm, and it already doesn't look good for the therapy. Is there any hope for Biogen to turn things around?

What the future holds for Biogen

Aduhelm is central to Biogen's prospects, at least over the next five years or so. That's because the company's sales have been declining since it lost patent exclusivity for Tecfidera, its multiple sclerosis medicine. Biogen's revenue dropped 18% to $2.8 billion in the third quarter, largely due to Tecfidera's declining sales.

Biogen does have a little more than a half-dozen late-stage programs underway, including one for another potential AD medicine, lecanemab. While we should expect some of these pipeline programs to earn FDA approval and start contributing to Biogen's financial results within the next couple of years, it is unclear whether they can help the company register solid top-line growth.

Perhaps that's why Biogen is rumored to have been looking for potential acquisition targets. Buying another biotech that has either highly promising pipeline candidates or approved drugs with fast-growing sales could help the company reverse course. But as things stand, investors don't know if or when an acquisition will take place, not to mention these deals don't always work out seamlessly.

So Biogen's future looks very uncertain. On top of that, its forward price-to-earnings ratio of 12.71 is slightly higher than the biotech industry's average of 11.2. The company has been highly successful over the years, and with its long-standing leadership in the pharmaceutical industry, it could stage a strong comeback eventually.

But as of now, I believe there are much more attractive biotech stocks to consider investing in today.

10 stocks we like better than Biogen
When our award-winning analyst team has a stock tip, it can pay to listen. After all, the newsletter they have run for over a decade, Motley Fool Stock Advisor , has tripled the market.*

They just revealed what they believe are the ten best stocks for investors to buy right now... and Biogen wasn't one of them! That's right -- they think these 10 stocks are even better buys.

These companies are set to ride secular growth trends.
STOCKS・16 HOURS AGO

These stocks appear positioned to maintain considerable growth levels for some time to come.
STOCKS・20 HOURS AGO
The Motley Fool

Adding shares of these market leaders should pay off big when the dust settles.
STOCKS・19 HOURS AGO
The Motley Fool

These stocks could be good places to park your money.
STOCKS・16 HOURS AGO
The Motley Fool

Income investors can find a safe haven in these dividend stock stalwarts.
STOCKS・21 HOURS AGO
The Motley Fool

The quick answer? It depends what your portfolio looks like.
ECONOMY・2 DAYS AGO