With Roe in doubt, states act on abortion limits, expansions 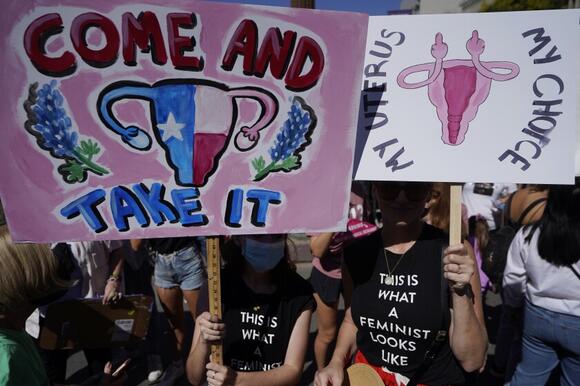 It didn't take long for abortion to re-emerge as a flashpoint in state legislatures.

Less than a month into the 2022 legislative sessions, battles over the future of abortion already are setting up around the U.S. Republican lawmakers are proposing new restrictions modeled after laws in Texas and Mississippi that present a direct challenge to the landmark Roe v. Wade decision, while some Democratic-led states are working to preserve or expand access.

The activity in state legislatures was anticipated after the U.S. Supreme Court, with its conservative majority, signaled it was ready to make seismic changes to the nationwide right to abortion that has stood for nearly half a century. If the court overturns Roe v. Wade entirely, the decision on whether to keep abortion legal would fall to the states.

More than 20 states already have laws on the books to ban or dramatically restrict abortion if Roe v. Wade is overturned. As legislative sessions begin, several are considering new bans.

“This could be a really, really dramatic year in terms of people’s ability to access abortion care and to decide if, when and how they become a parent,” said Kristin Ford, vice-president of communications and outreach at NARAL Pro-Choice America, a pro-abortion rights group. “At this time next year, we could be looking at a scenario in which more than half of the country has lost access to abortion ... It will have consequences for everyone.”

Against that backdrop, California lawmakers will consider plans this year to become a “sanctuary” for those seeking reproductive care. That could include paying for travel, lodging and procedures for people coming from other states.

“We are confronting an all-out assault on reproductive freedom in America. There are powerful forces working tirelessly to drag us backwards. But here in California, we are not going back,” said Assemblywoman Cottie Petrie-Norris, as state lawmakers proposed eight bills on Thursday. “We will continue to fight for reproductive freedom."

Susan Arnall, director of outreach for the anti-abortion Right to Life League, said other Democratic-led states are likely to follow California's lead. Her organization is fighting the legislation introduced in the nation's most populous state.

Even so, she said abortion opponents have gained the upper hand throughout the U.S.

“Life is winning ... and the abortion industry is losing,” Arnall said.

Other Democratic-leaning states are not yet copying California, though New Jersey recently became the 15th state to protect the right to abortion in state law, according to the Guttmacher Institute, an abortion rights think tank. Vermont could move toward enshrining “reproductive autonomy” in its constitution this year. In Michigan, abortion-rights groups are seeking an amendment enshrining the right to abortion in the state constitution.

Meanwhile, at least seven states could follow Texas, which has already effectively banned abortions after six weeks with a law strategically written to avoid a federal court challenge. The Supreme Court has allowed the law to remain in effect, even though it appears to contradict the Roe decision.

Similar proposals have been introduced in Ohio, Alabama, Oklahoma, Missouri, Florida and Arizona. South Dakota Gov. Kristi Noem, a possible 2024 presidential contender, released a proposal on Friday modeled after the Texas law . She said it would "ensure that both unborn children and their mothers are protected in South Dakota.”

Other states that already have six-week bans on the books also could amend those measures to look more like the Texas law so they can take effect, said Katie Glenn, government affairs counsel at Americans United for Life, an anti-abortion group.

The Texas law is unusual because it allows private citizens to file civil lawsuits against anyone who helps someone else get an abortion after six weeks. It has made legal challenges difficult because the government is not involved in enforcement.

More than a dozen states have passed abortion bans after six weeks but have seen those efforts blocked by the courts. That has made the Texas model more attractive to conservative lawmakers.

“Our message to lawmakers is, ‘Full steam ahead.’ If you have felt like maybe something’s not worth doing because it might be enjoined or you’re worried about it, this is a great opportunity for state lawmakers to let the Supreme Court know, ‘We’ve got this,’” Glenn said.

Meanwhile, at least three Republican-led states — Arizona, Florida and West Virginia — are weighing bans on the procedure after 15 weeks, similar to the Mississippi law that the Supreme Court appeared to view favorably during arguments in December. Under Roe, abortions are legal until the point a fetus can survive outside the womb, which is usually around 24 weeks.

In Florida, which currently allows abortions up to that point, GOP legislative leaders are optimistic about a proposal to ban it after 15 weeks, with some health-related exceptions but none for rape and incest.

“There’s a lot of pro-life legislation. We’re going to be welcoming it,” Republican Gov. Ron DeSantis told reporters earlier this month. He is up for reelection this year and is considered a top Republican presidential hopeful for 2024.

In another major shift last year, the Food and Drug Administration made a regulatory change that allows people access to abortion medication by mail after obtaining a prescription online. That promises to be another front in the legal debate over abortion. Some states could allow pharmacists to opt out of dispensing the drugs if they oppose abortion.

Last year, eight states passed measures restricting abortion medication sent through the mail in anticipation of the FDA decision. A handful of states, including Republican-led Iowa, will debate bills on the topic this year, said Elizabeth Nash, a state policy analyst at the Guttmacher Institute.

Last year was the “worst year for abortion rights" since the Roe decision in 1973, Nash said, with over 100 restrictions enacted in the states.

“It just feels like the state sessions in 2022 are also going to be very active on abortion restrictions,” she said. “It feels like we’re at the beginning of another wave.”

Greene testified on Friday that she didn't recall whether she asked Trump to invoke military rule, despite telling Meadows to relay the idea to Trump.
ATLANTA, GA・24 DAYS AGO
USA TODAY

The Centers for Disease Control and Protection announced in April that the Title 42 would be rescinded on May 23.
LOUISIANA STATE・23 DAYS AGO
Deadline

Click here to read the full article. UPDATED: When America fell asleep watching the election returns last night, Dave McCormick led Dr. Mehmet Oz 31.2% to 31.1% in the race to become the Republican nominee in the election for the Pennsylvania Senate seat being vacated by Pat Toomey. What a difference a day makes. Late today, those results had flipped, with Oz registering 31.2% and McCormick 31.1%. A New York Times tally had the lead at just over 1200 votes. Thousands of votes are outstanding — many of them mail in ballots — and, according to several reports, they could take...
PENNSYLVANIA STATE・19 HOURS AGO
Business Insider

Colorado Governor Jared Polis cited the "impacts of inflation and the cost of living" as reasons for the tax rebate program.
COLORADO STATE・24 DAYS AGO
MSNBC

A new Republican-backed law in Florida will repeal Disney’s special tax status, resulting in a property tax increase of up to 25% for residents of Orange County. MSNBC’s Lawrence O’Donnell explains how the move comes as GOP retribution for Disney’s opposition to Florida’s “Don’t Say Gay” bill.April 26, 2022.
FLORIDA STATE・23 DAYS AGO
Fox News

EXCLUSIVE: A group of Republican senators is introducing legislation to block the Biden administration from sending personnel and funding from the Department of Veterans Affairs (VA) to alleviate the crisis at the southern border. The senators are alarmed by the Biden administration's announced termination of Title 42 on May 23,...
CONGRESS & COURTS・23 DAYS AGO
CBS News

A 60-year-old man who has been charged in the January 6 insurrection at the Capitol has been identified as the son of a fames American artist. Vincent Gillespie, who has been in a legal battle against his stepmother to gain control of paintings by his father, Gregory Gillespie, was arrested in February on charges relating to the Capitol riot.
ATHOL, MA・23 DAYS AGO

MEXICO CITY — Mexican President Andrés Manuel López Obrador on Monday urged U.S. Latinos not to vote in November’s midterm elections for politicians who have “mistreated” them, in response to a comment by former U.S. President Donald Trump. Trump boasted at a rally in...
PRESIDENTIAL ELECTION・23 DAYS AGO
Newsweek

The poster offered a solution for what someone should do should they see someone in the restroom they don't think matches the sign on the door.
RELIGION・23 DAYS AGO
Newsweek

The former president referenced scoring well on a cognitive test in 2018, which is designed to detect whether a person has early stages of dementia.
DELAWARE COUNTY, OH・25 DAYS AGO
NBC News

A Kansas legislator said she does not “appreciate the huge transgender female who is now in our restrooms in the Capitol,” seeming to refer to her only transgender colleague. State Rep. Cheryl Helmer made the statement in an email with a University of Kansas graduate student, who voiced...
KANSAS STATE・23 DAYS AGO

An attorney for the campaign said they thought they were allowed to use the funds based on a "good faith" understanding of the "highly confusing" rules.
FLORIDA STATE・1 DAY AGO
Newsweek

Individual judges may not like the policy choices of the Biden administration, but it is not their job to weigh in on that policy debate.
TEXAS STATE・24 DAYS AGO
GOBankingRates

May is almost here, and millions of households are looking forward to their next SNAP payments. See: Surprising Things You Can Buy With Food StampsFind: SNAP 2022 -- Is My State Giving Out Extra Money...
AGRICULTURE・1 DAY AGO
San Diego Union-Tribune

Authorities say a Chinese-born gunman was motivated by hatred against Taiwan when he chained shut the doors of a California church and hid firebombs before shooting at a gathering of mainly of elderly Taiwanese parishioners
ORANGE COUNTY, CA・2 DAYS AGO
The Associated Press

WASHINGTON (AP) — The Senate approved a bill Thursday aimed at easing the baby formula shortage for families participating in a government assistance program that accounts for about half of all formula purchased in the United States. The House passed the bill the day before, so it now goes...
CONGRESS & COURTS・25 MINUTES AGO