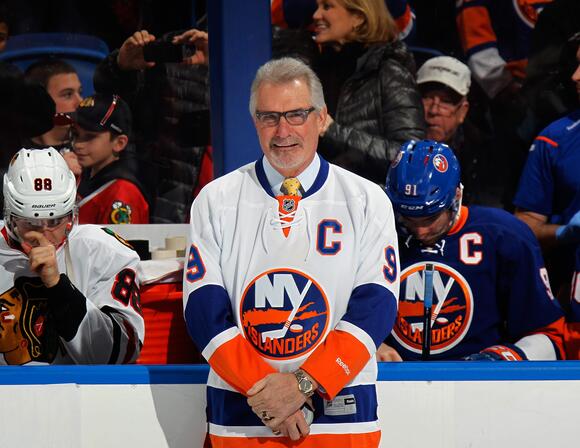 The Islanders’ celebration of Friday’s win over the Coyotes, which moved the team past the .500 mark, quickly turned to mourning as the team learned of franchise legend Clark Gillies’ passing at the age of 67.

Head coach Barry Trotz learned the news as he left the ice following New York’s convincing victory, and let the team know that the organization they represent just lost one of its greatest icons.

“Very tough,” Trotz said. “I think when you talk about Clark, Clark has a relationship with so any guys who cut their teeth with the Islanders. He was bigger than life. When you saw Clark Gillies, you thought ‘Islander.’ There was no doubt, no gray area.”

Gillies was an Islander for 12 of his 14 NHL seasons, making the playoffs in each season with New York, including the franchise’s unforgettable run of four straight Stanley Cup victories from 1980-83. From 1975-1982, Gillies logged more than 30 goals in six of those seven seasons, and is still fourth in franchise history with 304 career goals.

“It's tragic, to be honest with you,” Matt Martin said. “Clarkie's always gone out of his way to welcome players into the organization. I think he epitomizes everything that being a New York Islander is.”

More important than his contributions on the ice, Gillies remained a fixture on Long Island long after he called it a career, starting the Clark Gillies foundation, which helps kids who are mentally, physically, or financially challenged.

“I always thought ‘That’s who I want to be when I grow up,’” Martin said. “He’s just an amazing human being. Just very sad and unfortunate…he’ll forever live on inside of this organization. He represents everything about being a New York Islander.”

Having just heard the news of Gillies’ passing after Friday night’s victory, there was barely a mention of the actual game during the postgame press conference. No talk of breaking pat the .500 mark, no talk of the team pulling itself out of last place. The focus was on the loss of an Islander legend who transcends this season, and all the others that will follow.

“He played the right way,” Trotz said. “He was part of the community. Everything you think about being an Islander, a good teammate, a fantastic person, all of those things. That was a real nightmare. My heart dropped when I was told coming off the ice. He will be missed. He really will.”

Igor Shesterkin was on top of his game in a must-win game three for the Rangers on Sunday, and nobody around the team was surprised in the slightest.
NEW YORK CITY, NY・1 DAY AGO
WFAN Sports Radio

Thibodeaux took the mound at Yankee Stadium clad in his customary number five jersey, and fired a in a floater that the catcher jumped up to make the snag on.
NEW YORK CITY, NY・2 DAYS AGO
WFAN Sports Radio

Gerrit Cole pitched eight innings and struck out 11, but had to make sense of one big hiccup that included four runs allowed in a disastrous third inning.
NEW YORK CITY, NY・11 HOURS AGO
WFAN Sports Radio

Brandon Tierney has been saying the Mets need to add a power bat to become true contenders, and says J.D. Martinez would represent a big-time addition.
NEW YORK CITY, NY・4 HOURS AGO

Mets manager Buck Showalter detailed his birthday party in the Mets house on Monday night in San Francisco, which included a piñata and other surprises.
NEW YORK CITY, NY・10 HOURS AGO