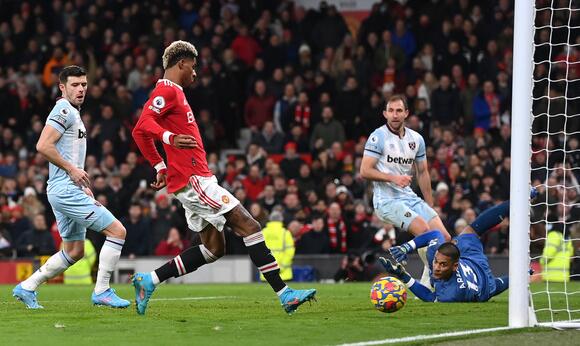 Manchester United’s Marcus Rashford scored a last-second winner as they beat West Ham United 1-0 at Old Trafford in the Premier League on Saturday to move up to fourth spot. Substitute Rashford tapped in a low cross from Edinson Cavani deep into stoppage time after United had broken down the left flank with the final move of the match. The win means United move above West Ham with 38 points from 22 matches while the Hammers are now fifth on 37 from 23.

Until Rashford’s goal finished off an attack started by Cristiano Ronaldo and also featuring Anthony Martial there had been few chances at either end in a disappointingly dull game. Tomas Soucek had gone close to scoring for the Londoners near the end with a glancing header from a corner which flashed just wide of the far post.

Follow all the latest reaction from the Premier League game at Old Trafford below.

According to recent reports, Lazio President Lotito spoke about Star Midfielder Sergej Milinkovic-Savic, whose impressive skills and statistics have brought the attention of Manchester United.
PREMIER LEAGUE・38 MINUTES AGO
The Independent

Gareth Southgate and his England squad will be facing up to the “embarrassment” of playing behind closed doors against Italy in the Nations League next month as the Three Lions boss admits recent fan behaviour is a concern.England play four group fixtures in June, with away games in Hungary and Germany followed up by the visit of Italy and the reverse match against the Hungarians.The opening clash at the Puskas Arena will take place in front of an empty stadium on June 4 after racist incidents marred England’s last trip to Budapest.England’s game against Italy will be behind closed doors...
PREMIER LEAGUE・2 HOURS AGO